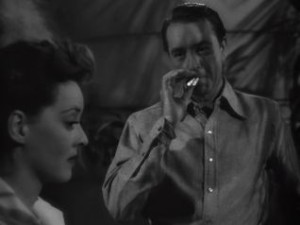 I see the novel ending with an open door. — Michael Ondaatje

I just finished reading a terrific book. And I was going to blog this week about how much I liked it and why I thought it works on all levels – complex characters, a delicious plot with well executed twists, and a setting so well rendered that I felt I had been parachuted in.

But then last night, I got to the ending. It was so…tidy. After three hundred pages of gloriously messy narrative, the author chose to tie up all the plot threads into a pretty pink bow. It just didn’t work for me. Why? Because it deprived me of thinking for myself. It slammed the door on the possibilities I was creating in my head for her characters. It didn’t leave my imagination anywhere to go. And thus, it lost its power.

If you haven’t yet guessed, I love ambiguous endings. I love that Rhett tells Scarlett off and walks away into the fog. I loved that we don’t really know what happens to Offred in Margaret Atwood’s The Handmaiden’s Tale, when she says, “Whether this is my end or a new beginning I have no way of knowing: I have given myself over into the hands of strangers, because it can’t be helped.” And yeah, I even sorta kinda maybe liked the ending to Gone Girl.

Four of my favorite movies are Now Voyager, The Graduate, Lost in Translation and Cinema Paradiso. Will Jerry continue to light two cigarettes for himself and Charlotte? Do Ben and Elaine stay together? What did Bob whisper to Charlotte at the end and did they go back to their awful relationships? Will the adult Toto ever believe in love again? 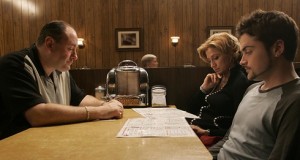 And about that last scene in The Sopranos? You know, where the family’s sitting in a diner as Journey’s “Don’t Stop Believin'” plays, the tension builds and then suddenly the screen goes dark and silent? Loved it! The series creator David Chase was later quoted as saying, “I have no interest in explaining, defending, reinterpreting, or adding to what is there. People get the impression that you’re trying to (mess) with them, and it’s not true. You’re trying to entertain them. Anybody who wants to watch it, it’s all there.”

Chase might well have added, “it’s all there…in your head.” Because for me, that is where the power of great storytelling lies. For me, even the best constructed novels can fail because almost always I can sense the author moving toward that inevitable ending, starting to close the circle and make sense of it all for me instead of letting me do it.

Now we crime dogs don’t have a lot of latitude when it comes to ambiguity. The conventions of our genre dictate that there is a crime to be solved and that usually implies something to be resolved. Readers are drawn to mysteries and thrillers because the stories usually attempt to impose order on chaos, to make sense out of the nonsensical, to have a hero triumph and make the world right again. I think readers of most kinds of fiction –- yes, even literary – want their novels to make sense. And while they might be willing to let things slide for a while, they usually crave a gratifying conclusion. The reason is easy to understand: Our real lives are messy, confusing, full of dead ends and false starts, horny toads instead of Christian Grey princes, and let’s face it, we all don’t live happily ever after. So when we turn to crime fiction and romance, we are looking for a satisfying conclusion.

But what is “satisfying?” Isn’t there room in there for shadows and crooked lines? Can’t we have some ambiguity?

Some crime writers try to allow for this, but readers sometimes get testy about it. I have two books in my series that have open-ended conclusions. One (A Thousand Bones) involves the case itself and I got emails from readers taking me to task for not “solving” the case in a conventional manner. But the crime was so awful and so personal for my protag, for her to do anything else would have been too…tidy. The other time I left an ending open was in our latest Louis Kincaid book, Heart of Ice, and it involves our hero’s personal life. My editor at the time wanted us to tell readers what exactly was going to happen, but we fought for the open ending. I trust the readers to figure it out.

Tana French, in her Edgar winning debut In the Woods, had similar reaction to her ending. The plot involves two separate cases, decades apart, that are playing on the psyche of the detective. He solves the newer one but the older one, that truly eats at his soul, remains unsolved. French actually cautions us this is going to be outcome in the book’s opening lines:

“What I warn you to remember is that I am a detective. Our relationship with the truth is fundamental, but cracked, refracting confusingly like fragmented glass. It is the core of our careers, the endgame of every move we make, and we pursue it with strategies painstakingly constructed of lies … and every variation on deception. The truth is the most desirable woman in the world and we are the most jealous lovers, reflexively denying anyone else the slightest glimpse of her. We betray her routinely … This is my job … What I am telling you, before you begin my story, is this–two things: I crave truth. And I lie.”

I was watching The French Lieutenant’s Woman on TMC the other night. I’m not crazy about the movie, but it got me thinking about the book, which I had to read eons ago as a literature major. I remember being baffled by it, because right in the middle of Sarah and Charles’s doomed love affair, a narrator appears out of nowhere and tells us we now will have three endings and even flips a coin to decide what order we will get them.

Now John Fowles loved bending narrative rules and was famous for his ambiguous endings. (Maybe because he studied the Existentialists at Oxford?) The Magus ends with the hero’s future an open puzzle that readers are challenged to solve for themselves.

Fowles once told an interviewer how he had received a sweet letter from a reader who wanted to believe that Nicholas, the protag of The Magus, was reunited with his girlfriend at the end of the book — a point Fowles had deliberately left ambiguous.

“Yes, of course they were,” Mr. Fowles told the woman.

Fowles got a second letter the same day from an irate reader taking issue with the ending and demanded, “Why can’t you say what you mean, and for God’s sake, what happened in the end?”

Fowles wrote back, “They never saw each other again.”

Now we mere mortals probably have to be a bit more careful when we use ambiguity. It doesn’t always work. At best, it conveys pretension and at worst, it just confuses the reader and pisses him off. Which brings me all the way back to that book I finished the other night. It was such a letdown to be spoon-fed that ending after such brilliance. Why was the writer compelled to tie the ends up so neatly?

E.M. Forster, in his splendid Aspect of the Novel asks the same question: “Why is this necessary? Why is there not a convention which allows a novelist to stop as soon as he feels muddled or bored? Alas, he has to round things off, and usually the characters go dead while he is at work.”

Okay, one last quote before I go, but it’s a beaut. And it comes from a fictional person, Stephen Maturin. He is a character in a series of novels by Patrick O’Brien, who shows up as the ship’s doctor in the fabulous move, Master and Commander.

“The conventional ending, with virtue rewarded and loose ends tied up, is often sadly chilling; and its platitude and falsity tend to infect what has gone before, however excellent. Many books would be far better without their last chapter: or at least with no more than a brief, cool, unemotional statement of the outcome.”

Give me a book that makes sense and is satisfying. But don’t wind things up so tightly that you squeeze the life out of it. Let me think, when the story ends, that the characters are like Bette Davis and Paul Henreid, on a big ship, setting sail on some grand voyage, going…somewhere. And that I am going with them.

19 thoughts on “A Plea for…Unhappily Ever After”