My reading preference leans toward humorous mysteries. Why? There are enough tales of horror in the daily news. I aim to escape into another world when I read at night, to ease my mind into sleep. If I’m reading a thriller with a rollercoaster ride or a suspense novel with a sense of dread, that doesn’t induce a calm state of mind. So I turn to lighter works for that escapism.

I do the same in my own writing. I’d rather have you smile than cry while reading my stories. Murder by Manicure is a perfect example. I’ve updated this earlier work, so it’s available in a new Author’s Edition. Revising the story brought me the same joy as when I originally wrote it. Besides the heroine’s wry outlook on life that is one source of humor, I’d set up a situation with a friend that would get her in trouble. Marla is a hairstylist and salon owner in sunny Palm Haven, Florida. In the same shopping center is Bagel Busters, a deli owned by her friend, Arnie. 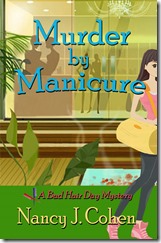 One day, Arnie rushes into Marla’s salon. Here’s the condensed version of what happens:

“Marla, you have to help me!” The big man’s mustache quivered, and his dark eyes regarded her wildly.

“What’s wrong? Are your kids all right?”

“Yes. That’s not the problem. It’s Hortense.” Arnie wrung his hands. “She’s a former classmate. We went to high school together, and she had a crush on me. The ugliest dog in school, that was her. A real fresser, too. Ate everything in sight. And now she’s here! Oy vey, what am I going to do? She’s on her way over here.”

“So? You can exchange a few reminiscences and then she’ll leave.”

He leaned forward, breathing heavily. “You don’t understand. She likes me. Hortense said she’d been sorry to learn my wife had passed away, and how difficult it must be for me to raise two kids on my own. I could tell from her tone of voice that she’s still interested in me.”

“She’s divorced.” His brows drew together. “I said the only thing I could think of to get rid of her. I told her I was engaged.”

Marla smiled gently. “Arnie, how could you? The poor woman probably just wants an hour of your time.”

“No, no. She’s moving back to Palm Haven. I had to discourage her. Tell me you’ll play along.”

“I knew you wouldn’t mind, since you’re such a good friend.” Taking her by the elbow, he steered her into the rear storeroom. “She’ll come to the salon. Tell her off for me, would you please?

“Me?” She wrinkled her nose. “Why would she come here?”

“Oh, God,” he moaned. “I remember how her second chin jiggled when she waddled down the hall. She was the only girl with frizzy black hair whose boobs were overpowered by her blubber.” His eyes grew as round as bagel holes when the front door chimed. “That may be Hortense,” he croaked. “Marla, you have to save me. I’ll give you free bagels for a year.”

Marla meets the woman, who turns out to be a buxom blonde. The story continues….

“Hey, Arnie,” she called, eagerly anticipating his reaction. “Someone here to see you.”

All eyes in the salon turned in their direction as Arnie shuffled toward the front, gaze downcast like a condemned man.

“Congratulations, Arnie,” crooned Hortense. “You have a lovely fiancée.”

Marla, entertained by Arnie’s sudden, shocked glare as he raised his eyes, didn’t catch on right away until she heard snickers from her staff.

“Don’t tell me,” she said to Hortense. “Arnie told you we’re engaged?”

You can imagine the hijinks that follow. And hopefully, readers will want to follow Marla’s crime solving exploits as well. It’s the personal connection to your characters that keeps bringing readers back for more. In this example, we have situational humor. Other sources can be physical antics like slapstick comedy, snarky comments, or outrageous characters. What methods do you employ to bring levity to your work?

8 thoughts on “Humor in Mysteries”