I don’t believe in writer’s block. The reason is twofold. First, I’m a professional writer; my job is to come up with ideas. I’ve never heard of a mechanic suffering from mechanic’s block or a doctor suffering from doctor’s block. When I’m faced with an issue in my story, I come up with a solution. That’s part of being a writer. 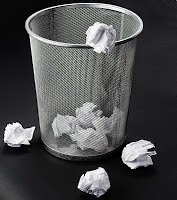 Second, when I do get writer’s block, I turn to my co-writer for the answer. OK, so the second reason is not something every writer has to fall back on. Lucky me.

So writer’s block is really a matter of a writer getting stuck for whatever reason. It’s frustrating but not a show-stopper.

First, you need to focus on why you’re stuck.

The most common form of writer’s block is not knowing what happens next. This is basically a plotting issue. The solution can be found in 5 words: What does the protagonist want? If you backtrack to the last point in the story that it was clear what motivated the protagonist’s actions and how it drove the story forward, the answer to what happens next will usually be revealed. Think about the story question. Did you stray from the process of answering it? Chances are you created a scene that does not contribute directly or indirectly in answering the main story question—the big conflict. Starting a rewrite from that point will usually get you back on track.

Another common issue that will derail your story is facing the dilemma of why anything matters. Who cares? This usually deals with the question: What’s at stake. Whether it’s an internal or external struggle, the protagonist must realize that fighting the fight is worth it. If she loses, what’s at stake? What does she stand to lose? If it’s a high concept thriller, what does the community, country, or civilization stand to lose? Reexamining the stakes can help to put you back on course.

A third issue in suffering from writer’s block is facing the crippling question: Is this story logical? In other words, why would it even happen? You might have a really cool idea, but the reality is that no sane person would follow the path laid out by the plot. It’s just not something the reader would buy into. If this is the case, rethink the story in terms of how it relates to HUMAN BEINGS. Don’t get me wrong. Even the most outrageous science fiction or horror stories still have to relate to human emotions and logic. Otherwise, they become 2-dimensional. If your story is so out there that the average reader can’t relate, try reexamining the human aspects of it. Many writers including me believe that there are only two emotions in the world: love and hate. If your story lacks either, then it becomes hard if not impossible to sell the reader on an outrageous, illogical plot. And writer’s block raises its ugly head.

How about you, my Zoner friends. How do you overcome writer’s block?

“THE SHIELD rocks on all cylinders.” ~ James Rollins, NYT bestselling author of THE EYE OF GOD.

29 thoughts on “Getting over the block”