Skip to primary content
James Scott Bell
@jamesscottbell
We all know that Bogart never said, “Play it again, Sam.” That mangled quote, which Woody Allen famously used in his stage play (and later movie) came from Casablanca,where Bogart’s character actually has this exchange with Dooley Wilson (as Sam):
Rick: You know what I want to hear.
Sam: No, I don’t.
Rick: You played it for her, you can play it for me!
Sam: Well, I don’t think I can remember––
Rick: If she can stand it, I can! Play it!
Recently, I’ve seen another bastardized quotation zapping around the internet. It’s a quote attributed to Ernest Hemingway. As a Hemingway-phile, I was quite interested. The quote goes like this: “There is nothing to writing. All you do is sit down at a typewriter and bleed.”
I was immediately suspicious. Something was rotten in the state of Bartlett, for it was the great sports writer Red Smith who said, “There’s nothing to writing. All you do is sit down at a typewriter and just open a vein.” (There are some variations on this, but the source is clear. You can read more here.)
This quote, in fact, became the basis of a book on writing, Just Open a Vein by William Brohaugh (Writer’s Digest Books, 1987). The Red Smith quote, with attribution, was printed right on the cover. 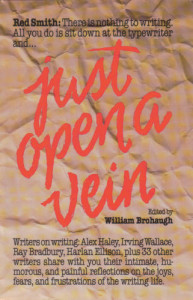 So how did these words get into Ernest Hemingway’s mouth, and thence to the wide world of the internet?
A TV writer did it, that’s how! As I investigated this further I came across an EW article from May 28, 2012, by Ken Tucker. It was a review of an HBO movie about Hemingway and his third wife, Martha Gellhorn. Tucker writes:
There’s a lot of dialogue that sounds as studied as Hemingway must have intended it to sound as he declaimed it (“Let me tell you about writers — the best ones are all liars”) and stuff that’s almost certainly cobbled together from various sources. (I was particularly amused when a negative review of the movie today in The New York Times made a point of ridiculing one Hemingway line — “There’s nothing to writing, Gellhorn — all you do is sit down to your typewriter and bleed” — but failed to realize it most likely derived from a New York Times sportswriter Red Smith’s wry dictum, “Writing it easy; all you have to do is open a vein and bleed.”)
So there you have it. It seemed like a good line to give to Hemingway in a biopic. But there’s another problem with having him say this (besides the fact that he never said it). The problem is he never would have said it!
Because Hemingway drafted in longhand, and he drafted standing up! He stood because of injuries sustained during his service in World War I. It was easier on him to be on his feet.
He usually only got to a max of 500 words in a single day, because he was famously trying to write “one true sentence” followed by another, and so on. (NOTE: There’s a famous author photo of Hemingway at a typewriter for the back cover of For Whom the Bell Tolls. But this was a staged photo to emphasize the Hemingway field reporter mythos).
So let’s be clear, when doing the hard work (the “bleeding”) of a first draft, Hemingway:
Did not sit.
Did not use a typewriter.
As his grandson, Sean Hemingway, once explained: “Hemingway wrote his first drafts in longhand, and you do not have to be a handwriting analyst from the FBI to appreciate his bold, fluid penmanship. Despite the author’s own comments in the book about the difficulty of the writing process and the need for revisions, many of his first drafts are remarkably clean, poignant testaments to his continued abilities as a writer later in life.”
And by the way, Hemingway never employed a secretary named Sam. Thus, he never, ever said, “Type it again, Sam.”
So here’s one instance where a reliance on what’s floating around the internet becomes a virus of error.
The irony, of course, is that I used the internet to do the research to get to the bottom of this. But this is the age we live in!
So what erroneous information have you come across in your internet surfing? What checks and balances do you use in your own research?
0

16 thoughts on “The Perils of Internet Information”