We’ve had a few previous discussions about e-books and the electronic devices on which you can read them. Why another post on the subject? Because unlike in the past, things are about to get really serious. So if you’re thinking about investing in a reader such as the Amazon Kindle 2, you might want to hold off for a short while because there’s a whole new generation of  readers about to hit the shelves.

A number of companies such as Asus, Plastic Logic, and the

British company Interead are ready to launch new devices that will get you reading digitized books and newspapers at prices that are finally becoming reasonable, some starting as low as $165. Sony is already shipping their e-reader starting at $199 (pictured). On October 20, Barnes & Noble introduced their e-reader called the Nook ($259).

Major publishers are jumping into the e-book pool on sites like SCRIBD while thousands of books are being converted into Kindle format and made available on Amazon every day. If nothing else, the term “out of print” will soon disappear from our vocabulary.

There is a downside to the plethora of new e-readers: format compatibility. An example is the books and periodical subscriptions your purchase through Amazon may not be readable on a different brand other than Kindle. 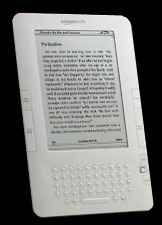 Also, keep an eye on Google in all this. They want to scan millions of out-of-print books and make them available through the Google Book Search for e-book readers. Amazon is fighting this because Google’s deal makes it hard for other e-book sellers (such as Amazon) to scan and distribute these same books. I bet this battle gets dirty before the dust settles.

But the tsunami of new e-readers should mean that we’ll see the end of Amazon’s only-game-in-town Kindle dominance as the prices go down and the features go up. Remember the Apple iPhone a few years ago and what happened next?

Do you have an e-book reader yet? Or are you resisting even the thought that this is the future?

11 thoughts on “The E-reader Tsunami Is Coming”