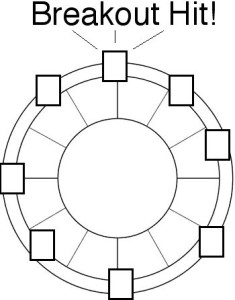 Some years ago I was teaching at a writers conference in New Mexico. After lunch I noticed one of the conferees sitting at a back table, looking distressed. I went over and asked her what was up.

“I don’t know,” she said. “Am I ever going to get anywhere? I see all these people, they all want it just as much as I do. How do I know if I’ll ever make it? ” Tears started down her cheeks.

I handed her a napkin for the tears, then took another and drew a pyramid on it. I divided the pyramid into six sections. Inside the pyramid are writers, I explained, with each section representing a different level of achievement.

The bottom, where most of the people are, is the realm of the “want to.” Or “I think I have a book inside me.” But outside of some scribblings, maybe a short story or two, perhaps an unfinished novel, these people never move on to the next level…

…which is where people like you are (I told her). Those who actually try to learn something about writing. Who buy writing books, go to conferences, take classes…and write.

Above that is the level for those who actually finish a full length novel. This is a great place to be. This is where real writers come from.

The next level holds those who write another novel, because the first one is probably going to be rejected. They do this because they are novelists, not just someone who happened to write a novel.

Next are those who get published. Above that those who are published multiple times.

Sitting on top of the pyramid is a Wheel of Fortune. This is where the breakout hits come from. The wheel goes around and lands on a book like Cold Mountain. Or The Da Vinci Code. Or Harry Potter.

No one can control this. No one know how to guarantee a hit, or it would be done every time out.

Your job, I told the young writer, is to keep moving up the pyramid. Each level presents its own challenges, so concentrate on those. As you move up, you’ll notice there are fewer people, not more. People drop out of the pyramid all the time. But if you work hard, you might get a novel on the wheel, and that’s as far as you can go on your own. After that it’s not up to you anymore.

The conference went on and I forgot all about this incident.

A couple of years later I bumped into her at another conference. She told me that this conversation and the diagram had a profound effect on her, and that she was going to keep going, and was finishing her first novel.

Two years after that she wrote to tell me she had landed a book deal. She is now a published author.

Writer, if you want to be published, if you want a hit book, don’t worry about things you cannot control. Don’t grasp at phantoms. Focus on the page right in front of you. Make it the best it can be, and build these pages into a book. And then another.

P.S. Adapted from the forthcoming The Art of War for Writers.

35 thoughts on “Writer, This is Your Job”