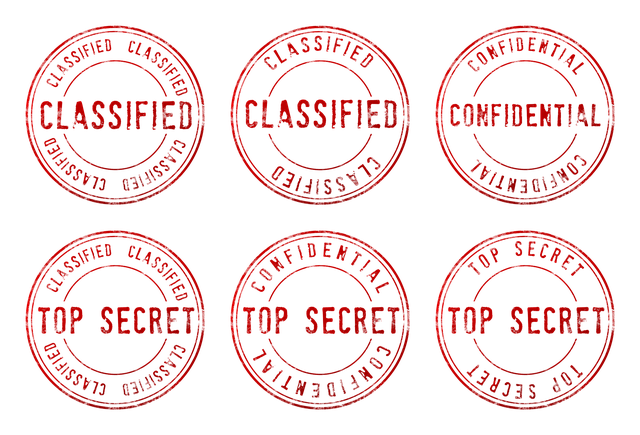 Image by Tayeb MEZAHDIA from Pixabay

One of my first writing lessons was Point of View. I learned it was a good idea to stick to one character at a time (and ‘time’ means more than a paragraph or two).

As a reader, I discovered I connected more with characters if I was privy to their thoughts. There are no hard and fast rules about Point of View beyond it’s important that readers can keep track of whose head they’re in.

My preference is to use Deep Point of View, which is sometimes called Close or Intimate, and that’s the focus of today’s post. What you call it isn’t as important as making sure that your readers can’t know anything your POV character doesn’t know. Or see. Or feel. Or smell. Or hear. It’s very close to writing in first person.

In my current WIP, my female lead knows why she quit her job, and is aware of some less-than-ethical behaviors of her boss. I’m eight chapters in, and she doesn’t want the male lead to know the details yet. But she can feed him bits and pieces as circumstances arise. The way I see it, it’s the author’s responsibility to find legitimate ways to withhold information from readers until it’s time to reveal it.

Which brings me to a couple of recent reads which had my hackles up. Both were written in first person POV. That puts the reader right into that character’s head, the same way Deep POV does.

In one book, the character read a letter; in the second she looked at a photograph. In both instances, the characters had strong emotional reactions to what they’d just seen. These books were both mysteries, and this “secret” information provided important clues.

But—and this is where I would have screamed out loud, had it not been late at night with someone sleeping nearby—both authors opted to hide this information from the reader. They simply avoided the reveal. The characters mulled it over, worried about it, wondered if they should tell another character, weighed the pros and cons. On and on. But never did they mention the name of the person in the photograph or the contents of the letter. The characters knew what they’d seen, so there was no reason the reader shouldn’t other than the author was doing what one of my first critique group leaders called “Playing Coy With the Reader.”

And for me, it’s not fair, not if you’re writing in first person or deep POV. It’s like when a television show character gets a letter, opens it, reads it, and then … cut to commercial without letting the viewer know what it said. If, when the commercial is over, the action picks up where it left off before the break and either shows the letter or the characters talking about it, I’ll accept it as being a way to make sure viewers “stay tuned.”

Now, if the author breaks to a different POV character, I might forgive them if, when we get back to the first character’s POV, we get the reveal. But to put a reader in a character’s head and then yank them out when something important happens is likely to aggravate them rather than heighten the suspense (which is what the author is going for.) To me, it’s a cheat.

In one of the books, the author never put the information out there. In the other, it took a while, but the reveal did come, so I grumbled and gave the author another chance.

And that’s what might happen. Play coy with the reader and you might lose them, not just for this book, but for future books they’ll never read.

In a more distant point of view, where the author is telling the story more than the character, it might not be such an issue, but then—I don’t like distancing points of view. Your mileage may vary.

All right, TKZers. What are your thoughts about authors withholding information a reader should have? Does it add a layer to the read for you, or frustrate you?

(I’m away from cyberspace this morning, but will be back later this afternoon to respond to comments.) 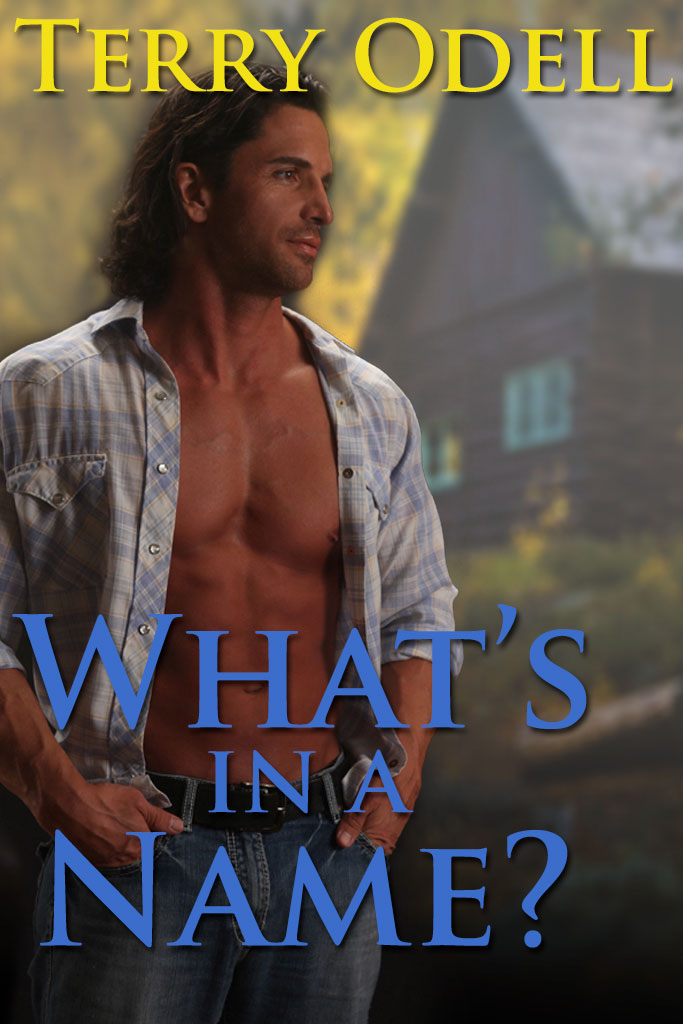 Last week, John Gilstrap addressed coming up with character names, and there were a lot of helpful suggestions in the comments.

I tend to hit the Google Machine. “Male (or female) Names Starting with …” is a frequent search. Another thing to add to that search is the year/decade that character was born. Name trends change with time.

I had a shocking realization when seeking a name for a character in a recent book.

Names have to “match” the characters to some extent. For me, it’s a loose match. Our country is so much of a melting pot that names often don’t match one’s ethnicity, and it’s often a stereotype to try to give them “appropriate” names. I recall my daughter, when she was in middle school, asking if her friend Kiesha could come visit. What’s your first visual? Probably not the blue-eyed blonde who showed up. But if I want an ethnic name, I just add that to my Google search.

This week, I thought I’d expand on John’s topic, because coming up with names is only part of the problem. You’ve cleared the choosing names for your characters hurdle. But there are pitfalls to avoid so you don’t confuse your readers.

A tip I picked up at a workshop was the reminder that the characters should sound like their parents named them, not you.

Major warning: Names shouldn’t be too similar to other characters in the book.

This mean no Jane and Jake, or Mick and Mack, or Michael and Michelle—and that includes nicknames. If everyone calls Michael Mike, and there’s another character named Norman, but Norman’s last name is MacDonald and everyone calls him Mac, then you’re setting things up for reader confusion. I recently read a book where the author had fixated on the letter B for character names, and these were major players, not bit parts. I don’t think I ever got them straight.

Many readers see the first few letters of a character’s name and connect it to whatever image they’ve created for that character. Your character might be named Anastasia, but the reader might be thinking “The blonde woman with the A name.”

So, how do you keep track so you don’t confuse or frustrate your readers? Here’s my system.

The late Jeremiah Healy prefaced one of his workshops with a very vocal complaint about character names in books. He said, “How hard is it to take a sheet of paper, write the alphabet in two columns, and then put first names in one, last names in the other?”

Now that we’re using computers, instead of a sheet of paper, I use a simple Excel spreadsheet. When I name a character, I fill in a blank field in the appropriate line. This lets me see at a glance when I start to fixate on a letter. I hadn’t been to Healy’s workshop when I wrote What’s in a Name? but when rights reverted to me, I used the spreadsheet and was shocked at what I’d discovered. THREE characters named Hank? Okay, only two, but the third was Henry “but you can call me Hank.” I still haven’t forgiven my then editor for that one.

This is what I found when I went through the book:
(You can click to enlarge the images) 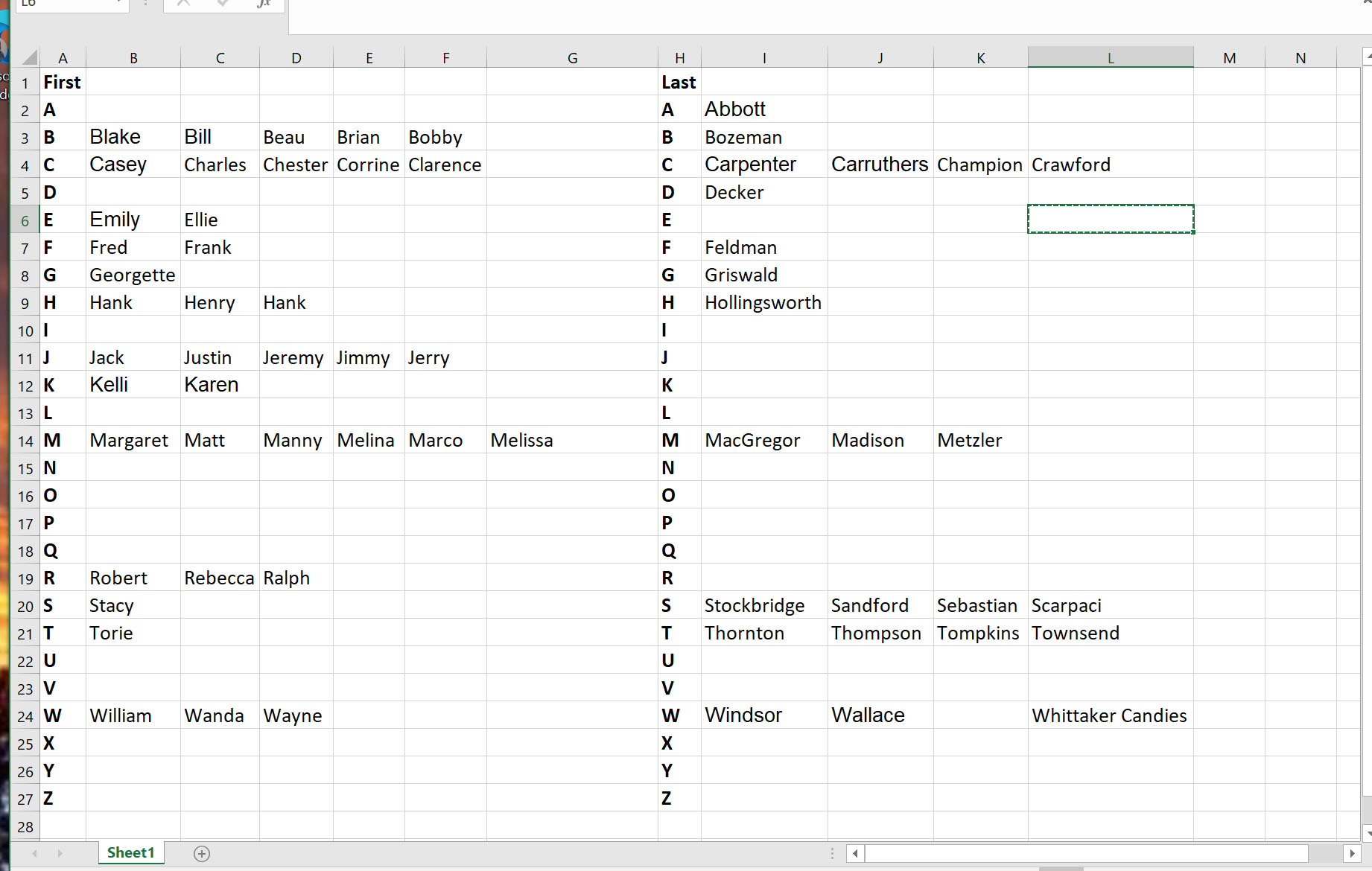 In addition to making minor revisions to the text, you can be sure I updated the character names. Here’s the “after” spreadsheet. 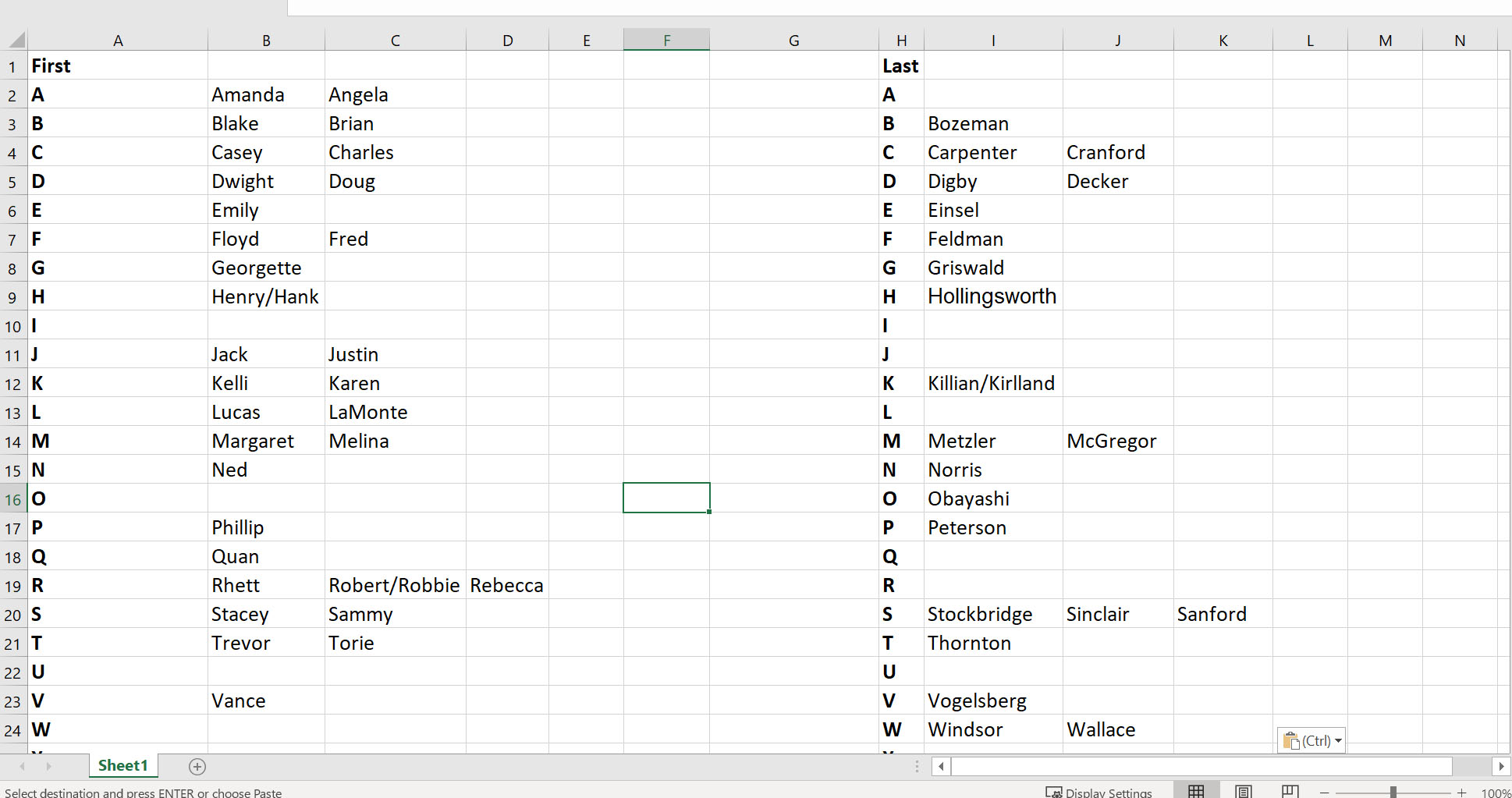 Other considerations. Foreign names might be realistic, but what if a reader is unfamiliar with the name, or its pronunciation? One of my critique partners wrote a book with a family of Irish descent, and she’s calling one of the characters Siobhan. (If I were naming a character that, the first thing I’d do would be to set up an auto correct, because I’d probably spell it wrong more often than not.) But typing it right is the author’s problem, not the reader’s. Do you know how to pronounce Siobhan? (shi-VAWN) If the author tells you, when you see the word do you “hear it” or is it strictly a visual?

(With apologies to Brother Gilstrap, I never see/hear his character Venice as Ven-EE-chay, no matter that he’s made the pronunciation clear. To me, she’s “Not Venice” in my head.)

And then, there’s a whole new set of problems. Audiobooks. When I started to put my books into audio, I had to focus on what things sound like as well as look like. In my third Triple-D Ranch book, the heroine’s ex-husband’s name is Seth. Her sister’s name is Bethany. They don’t look very similar on the page, but when spoken, I’m concerned that they’ll sound too much alike, especially if they’re in the same sentence. Or even paragraph. I don’t want my narrator stumbling (or calling them both Sethany).

All right, TKZers. Share your tips for keeping track of character names.