A few nights ago, my husband and I watched Population Zero, a documentary-style movie based on the alleged true account of a murderer who walked free after confessing to a triple homicide.

In the documentary, the killer even videotaped the murders and summoned this documentarian (our hero) to find the motive behind his killing spree. To entice him, he sent a photo of a bear chasing a horrifically burned buffalo — a symbolic message for the murders he committed in Yellowstone National Park.

The entire ninety-minutes shocked me, not only because a loophole in our constitution allowed a murderer to walk free but because of the explosive ending (no spoilers). It also made me suspicious. I thought, you mean to tell me an entire sheriff’s department couldn’t unravel the mystery but a film-maker cracked the case in a matter of days?

Don’t get me wrong, it’s a good movie. True story? Ah, not so much. The legal loophole, however, is real. Within the United States there’s a stretch of land where you could, in theory, get away with murder. Fact.

How Is This Possible?

Most of Yellowstone National Park is in Wyoming, but a portion of the federal land extends into Montana and Idaho. That’s where the problem begins. The 50 square miles of Idaho’s section of the national park is called The Zone of Death, and it’s because of a loophole in the U.S. Constitution. If, like in the documentary-style movie, someone committed a spontaneous murder on that 50 square mile strip, the U.S. Constitution may be their ticket to freedom.

In 2005, Brian C. Kalt, a law professor at Michigan State University of Law, published a paper entitled The Perfect Crime, where he pointed out that all of Yellowstone National Park was assigned to the District of Wyoming. But now, the District of Wyoming includes land in other states. So, Kalt asked the question, “What happens if you’re caught for a crime within that 50 square miles of the Idaho region of the park?”

The first thing LEO’s would do is bring you to the District Court of Wyoming, because the crime happened within Wyoming’s jurisdiction. But Article III, Section 2 of the U.S. Constitution states: The trial of all crimes, except in cases of impeachment, shall be by jury; and such trial shall be held in the state where the said crimes shall have been committed; but when not committed within any state, the trial shall be a such place or places as the Congress may be law have directed.

A smart killer, like the one depicted in Population Zero, could assert his right to have his case heard in Idaho. No big deal, right? Well, not exactly.

Amendment VI states: In all criminal prosecutions, the accused shall enjoy the right to a speedy and public trial, by an impartial jury of the state and district wherein the crime shall have been committed, which district shall have been previously ascertained by law, and to be informed of the nature and cause of the accusation; to be confronted with the witnesses against him; to have compulsory process for obtaining witnesses in his favor, and to have the assistance of counsel for his defense.

This is called the Vicinage Clause. 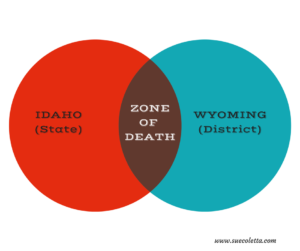 Picture two overlapping circles, with Wyoming (the District) on one side and Idaho (the State) on the other. Where these two circles intersect is that 50 square miles of Idaho land. The legal loophole exists because it has a population of zero. No humans live there, therefore, no jury can be called. Kalt argues, the court must let you walk free to avoid violating your Sixth Amendment rights.

“The more I dug into it, the more interested I got,” Kalt told Vice. “People have this fascination with uncovering a loophole for the perfect crime. There are a lot of different approaches to it. But in terms of geography, there’s just this one spot.”

Kalt proposed numerous solutions to Congress, but they have yet to act. In Kalt’s words, “All they have to do is redraw the district lines so that the District of Wyoming is Wyoming, the District of Idaho is Idaho, and the District of Montana is Montana. And if they do that, this all goes away.”

In Population Zero, the hero set out to prove the killer had preplanned the murder. If so, he could be tried in the district court where the murder was planned. But in the confession, the killer stated that one of the victims started a fight, and he just snapped. In which case, there’s nothing within the law that let’s the court hold him accountable. All events happened within The Zone of Death. Therefore, he walks. 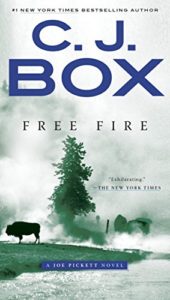 I know what you’re all thinking. What a fantastic plot for a novel! Sorry, folks. C.J. Box beat us to it with his 2007 thriller, Free Fire. I should also mention the author tried to fight Congress to close the loophole but no one wants to acknowledge its existence. The only way it’ll happen is if someone dies within The Zone of Death.

The loophole also inspired a 2016 horror film with the same title as the documentary-style movie, Population Zero. Although, I don’t recall the legalities being mentioned.

Has the Loophole Ever Been Tested?

In 2005, a hunter illegally shot an elk. When he fired he was standing in the Montana section of the park. Authorities indicted him in Wyoming. He successfully argued he had a right to be tried by jurors from Montana, and while people do live in that section, there are too few residents to call a legitimate jury. The court dismissed the argument out of hand, simply because it would imply that Yellowstone National Park contained a Zone of Death.

I’ll leave you with this: the Buffalo Campground, a popular tourist destination with a gorgeous lake and some of the best fishing for miles, is located within The Zone of Death. If you feel lucky, why not add it to your summer vacation plans. Any takers? 🙂

Have you seen Population Zero or read Free Fire? What do you think of this legal loophole? Let’s discuss.