Terry’s helpful post on transitions got me thinking (always a dangerous thing). So today I’d like to add a few nuggets of my own.

Simply put, transitions are what take you from one scene or POV to another, or ahead in time within the same scene. Here’s an example of a location transition:

John stormed out of the apartment. If the big man wanted a showdown, he was going to get it.
Putting pedal to the metal, John tore across town, ignoring stop signs and pedestrians and at least one cop.
Entering the office, John heard the receptionist say, “Good morning.”
“Whatever,” John said.

We have moved from John’s apartment to his office—change of location.

Now an example of time transition:

“You want to know why you’re being let go?” Stevenson said.
“Yeah,” John said. “Fill me in.”
“Sit down, and cool off. I’ve got some things to tell you.”
John plopped in a chair.
“I want to tell you about my dad, and how he started this firm,” Stevenson said. “I need to start when I was a kid.”
Half an hour later, John was ready to jump out the window. Stevenson hadn’t stopped talking the whole time.

We don’t get the entire Stevenson speech. Unless it’s crucial to the plot, we don’t need it. Time transitions are easy. Just add one line to let us know we’ve moved ahead within the same scene.

Now let’s look a little more closely at location transitions. I’m not talking about chapter breaks here, but moving to another setting within a chapter. When you do change locations, you can stay with the same viewpoint character, or shift to another POV. But you have to let the reader know what’s going on in the most efficient way possible.

There are three techniques:

As the term suggests, you can get from one location to the next by summarizing the transitional stuff (rather than showing each beat). Unless plot or character material is necessary, just get us to the new location with as little muss as possible. This is the narrative summary from in the first example in this post, above:

Putting pedal to the metal, John tore across town, ignoring stop signs and pedestrians and at least one cop.

We aren’t shown the drive. That would involve description, action, perhaps John’s internal thoughts as he drove. But if none of that has any value to the story, don’t put it in. Use narrative summary to get us to the new scene toot sweet.

The pulp writers were especially adept at this. Here’s how Talmage Powell (1920-2000) did it in his Black Mask story “Her Dagger Before Me.”

“All right,” I said. “I’ll do what I can to help you. This is murder. Contrary to what the public thinks, private dicks don’t like to get mixed in murder. If we have to wade through murder the cost is high.”
“I know,” Phyllis Darnell said. “I’ll pay.”
“I’m not worrying. After all, I’ll have the letters, won’t I?”
I ushered her out, showered, and went over to Mac’s garage, where my coupe had been laid up with a ring job.

Another way to move is by putting in a space break, like this:

White space is also how you switch between POV characters within the same chapter. Just be sure to identify the new viewpoint character in the first line:

Gil Stevenson stuck his head out his office door. “Has Stone come in yet?”
“No, Mr. Stevenson,” Peggy said.
“Well, get him in here the moment he arrives!” He slammed the door and took a deep breath. This was not going to be one of his better days.

Last week I wrote about the Bill Lennox stories by W. T. Ballard. For fun I re-read the first one, “A Little Different,” published in Black Mask in 1933. In one scene Lennox is in a cab being followed by a dirty PI. He gives the cabbie a fin ($5) to lose him.

The driver grinned and turned sharply onto Vine, right on Sunset, left at Highland, crashing a signal. Finally, at the corner of Arlington and Pico, he pulled to the curb. “Where to?”
Lennox said, “Take me to Melrose and Van Ness.” The driver shrugged and turned towards Western.
Lennox got out at the corner and walked to the apartment house.

What happened between the driver turning towards Western and Lennox getting out? Driving, maybe some talk, arriving, pulling to the curb, etc. We don’t need any of that. Here’s a little secret: the reader fills in that stuff subconsciously and thus the pace doesn’t slow one bit.

And speaking of pace, how you handle transitions is a major way to control it.

The above examples keep the pace crisp. But suppose you want to slow things down a bit, give the reader a breather, and stick in some deepening of character? Just use the transition to add internal thoughts or, if you’re brave enough, a flashback.

Putting pedal to the metal, John tore down the street. He saw a cop ahead and slowed. One thing he didn’t need was a ticket. One thing he did need was a drink. Maybe a quick stop at Barney’s would help. Sure. A little liquid courage never hurt.
Of course it hurts, you dope. You know how you get. Two shots of Bushmills and you’re ready to give Mike Tyson his comeback bout.

Putting pedal to the metal, John tore down the street. He saw a cop ahead and slowed. One thing he didn’t need was a ticket. He stopped at the red light like an A+ driving student.
Which he’d once been, in high school. That was before the accident. He and Tom Barker were out one night, John driving his dad’s Porsche. Tom wanted In-N-Out. John wanted Boone’s Farm Apple Wine.
“We’ll get some guy to buy it for us,” John said. “Then we’ll go stuff your face.”

Needless to say (but I’ll say it anyway) the skillful handling of transitions, and using variety in the technique, is a way to subtly enhance the fictive dream for the reader. And dreamers buy books.

Now let us transition into comments. 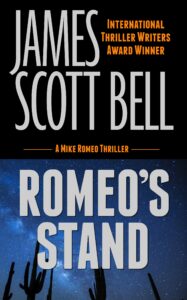 Tomorrow is release day for Romeo’s Stand, the fifth Mike Romeo thriller (the books can be read in any order). See the listing here!