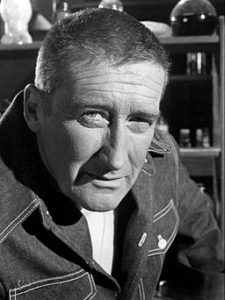 Those of us who write thrillers, noir, and crime fiction know that a huge part of our craft is tough talk—dialogue from the mouths of hardboiled protagonists, street hustlers, cops, thugs, hitmen, femme fatales, homme fatales, and other denizens of the dark side.

It’s not easy to do it artfully, for it is much more than littering the page with the F-bomb and its misbegotten progeny.

I saw a movie the other day, a highly-touted crime thriller. I won’t name it because I don’t like to put down other writers, but I will say the dialogue was pretty lame. What I mean is that there were a lot of F words tossed around without any originality or élan. Characters would just spout “F you” or “F that.” (But that’s how people talk in real life! you might be thinking. Well, you’re not writing real life. You’re writing fiction, which is a stylized rendering of life for an artistic purpose. Just recreating “real life” sounds doesn’t move the needle.)

So how can you talk tough without falling into the lazy lacing of platitudinous profanities? Let me suggest a few:

This is the toughest (!) form of tough talk, but it pays big when you can pull it off. The master of this kind of gab, of course, was Raymond Chandler. His novels featuring PI Philip Marlowe are filled with snappy banter that works because (and this is the key) it is perfectly in Marlowe’s voice. It never seems to be a strain. Like this exchange in The Long Goodbye:

“See you around,” the bodyguard told me coolly. “The name is Chick Agostino. I guess you’ll know me.”

“Like a dirty newspaper,” I said. “Remind me not to step on your face.”

Or this from The Little Sister:

“That slut. What does she say about me?” she hissed.

“Nothing. Oh, she might have called you a Tijuana hooker in riding pants. Would you mind?”

The silvery giggle went on for a little while. “Always the wisecrack with you. Is it not so? But you see I did not then know you were a detective. That makes a very big difference.”

“Miss Gonzales, you said something about business. What kind of business, if you’re not kidding me.”

“You mean without getting shot?” I asked.

“Sí,” she said thoughtfully. “There is also that to consider. But you are so brave, so big, so—”

“I’ll be at my office at nine in the morning, Miss Gonzales. I’ll be a lot braver then.”

Take your time with exchanges like this. Don’t force the issue. Play with the language. A different word here or there can make all the difference. I like the line from Lawrence Block’s short story “Headaches and Bad Dreams.” A detective is describing a suspect who is not exactly lovely to look at. “God made him as ugly as he could and then hit him in the mouth with a shovel.”

Tough talk is often clipped. It gives nice white space to the page, too. This was Robert. B. Parker’s preferred method. Here’s a bit from one of his Sunny Randall novels, Melancholy Baby:

“Sarah took a lot of drugs.”

“I graduate this June, and next year I want to be in a really good MBA program. I don’t want to do anything to spoil my chances.”

“So her drug use was disruptive?”

“Like she’d be crying and seeing things and …” Polly shook her head. “Did you ever go to college?”

“What did you major in?”

I could tell that Polly found that puzzling.

“I was a good artist and a bad student,” I said.

Go over all your dialogue scenes and look for words to cut. Replace some verbal answers with silence or an action beat. You’ll love the results.

This is the opposite of #2. It should be done sparingly. But every now and then consider having one of your characters give vent with a paragraph or two of straight tough talk.

Mickey Spillane liked to do this. He of course invented the quintessential hard-boiled PI, Mike Hammer. But he also wrote stand alones. In The Long Wait (1951) the narrator, Johnny McBride, has been dragged in by the cops for questioning. McBride insults the cops (this will get him beaten up later) and tells them to inform him of the charges or let him walk. The lead detective says:

“I don’t know what kind of an angle you think you’re playing, McBride, and I don’t give a damn. The charge is murder. It’s murder five years old and it’s the murder of the best friend a guy ever had. It’s murder you’ll swing for and when you come down through the trap I’m going to be right there in the front row so I can see every twitch you make, and there in the autopsy room when they carve the guts out of you and if nobody claims the body I’ll do it myself and feed you to the pigs at the county farm. That’s what the charge is. Now do you understand it?”

Pick a tense moment of tough talk and put yourself inside one of the characters. Write a 200 word rant. Do not pause to edit. Come back to it later and review. Even if you only end up using one line, it’ll be a good one.

As I said, tough talk does not have to be laced with expletives. You’re a writer. You have a whole palette of possibilities open to you.

Writers of the 40s and 50s often simply wrote things like: He cursed and walked out of the room. You know what? That still works. Readers can fill in the blanks in their own heads.

There are other methods. In Romeo’s Way I have a character, Leeza, who is young and foul-mouthed. Mike Romeo is trying to help her. She doesn’t want any. This character would definitely unleash a curse storm. But I didn’t want to lay that on the reader. So I did it this way:

She jumped back like I was the guy from Friday the 13th.

I put my hand out. She slapped it. “Get away from me.”

She began a tirade then, peppered with words with a hard K sound. She was a symphony of K. It was so constant and crazy, it hit my brain like woodpecker woodpecker peck peck woodpecker.

“Ease up,” I said. “There’s bad people who want you. Did you forget that?”

“Your boss, one of your bosses, Kat Hogg, is in a car over there. Come with us.”

Leeza looked across the street. Then she turned and ran.

I said something that sounded like woodpecker myself and gave chase.

Dialogue, as I’ve said many times in workshops and in books, is the fastest way to improve a manuscript. So when it comes to tough talk, don’t be lazy about it. Be crafty.