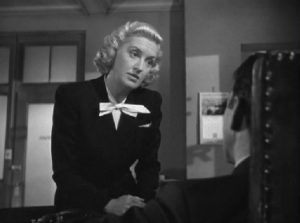 Lee Patrick as Effie Perine in The Maltese Falcon (1941)

What is the most important thing your novel must accomplish with the opening pages?

All of the above?

Well, sure! If you can do all that, do it. But let me suggest that there’s something else, without which these elements won’t be as effective.

What the author must do, as soon as possible, is bond the character to the reader. It’s an emotional alchemy that render fictive gold. When the reader is not just interested in, but emotionally connected to the main character, the urge to turn pages ramps up to its fullest potential.

This is why the concept of the opening disturbance is so crucial. When a character is confronted with threat or challenge, we have a naturally sympathetic reaction. We can identify. We’ve all been there. That’s why this a good first step to the bonding I’m talking about.

An even more powerful effect can be achieved by adding a second technique, one I call the Care Package. It’s one of my fourteen signpost scenes as laid out in Super Structure.

In the most basic sense, it refers to a caring relationship is in place before the story begins between the main character and someone else. This is to distinguish it from Pet the Dog, which is when the Lead, somewhere in the middle of the story, takes time to help another character who is weaker and in need.

A perfect example of both is in The Hunger Games. When we first meet Katniss, she is out hunting to feed her family—her mother and her little sister, Prim. Katniss’ actions are illegal, but she does this out of love. Those relationships are in place before the novel begins. Author Suzanne Collins also includes in this Care Package a scruffy cat that Katniss does not like. This is a skillful addition, for the Care Package works even if a character is resentful about the relationship and the caring is done out of obligation. That works because we admire those who do their duty, regardless of feelings.

In the middle of the book, Katniss becomes the protector of the weakest of the tributes in the Games—Rue. That’s an example of Pet the Dog. It is a relationship formed after the story is well under way.

I got an email recently from a writer who asked if the Care Package could be something the character is passionate about, like basketball or playing the piano.

The short answer is No. It has to be a human or an animal (as in Dorothy and Toto in The Wizard of Oz, or Terry Malloy and his pigeons in On the Waterfront). Being in love with an activity falls under the umbrella of self-interest. Caring about another person is the essence of selflessness.

Note, too, that the Care Package applies to any genre. Even the hardest of hardboiled fiction, as demonstrated in this passage from Dashiell Hammett’s classic, The Maltese Falcon:

When Spade reached his office at ten o’clock the following morning Effie Perine was at her desk opening the morning’s mail. Her boyish face was pale under its sunburn. She put down the handful of envelopes and the brass paper-knife she held and said: “She’s in there.” Her voice was low and warning.

“I asked you to keep her away,” Spade complained. He too kept his voice low.

Effie Perine’s brown eyes opened wide and her voice was irritable as his: “Yes, but you didn’t tell me how.” Her eyelids went together a little and her shoulders drooped. “Don’t be cranky, Sam,” she said wearily. “I had her all night.”

Spade stood beside the girl, put a hand on her head, and smoothed her hair away from its parting. “Sorry, angel, I haven’t—” He broke off as the inner door opened. “Hello, Iva,” he said to the woman who had opened it.

One action: smoothing her hair. One line, and not even one Spade gets to finish! This moment is the only bit of tenderness Sam Spade shows to anybody in the book. But Hammett knew it would stand out for that very reason. We get one peek that Spade is not made of pure ice…because he has someone in his life he cares about.

Simple exercise: Before writing your novel, take ten minutes to brainstorm a list of possible Care Packages for your main character. Make some based in love and others out of duty. Eventually you will find the one that feels just right.

It will feel just right to the readers, too.

The floor is open. What Care Packages can you think of from favorite novels or films? NOTE: I’m in travel mode today so my comments will be scarce. Talk amongst yourselves!