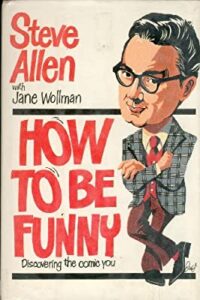 I received the following email the other day, and present it here with the sender’s permission.

Dear Mr. Bell,
Your Great Courses lectures on writing best-selling fiction are packed with helpful information, and because of them I’m now making progress with my fiction-writing. But I struggle with humor, since I am not naturally funny. I rarely come out with anything that makes people laugh, and when I do, it’s usually accidental.
I’ve begun reading Try Fear, and am impressed by how masterfully you inject humor into your fiction. Would you recommend a resource for learning to write humor?
I’m a children’s writer, with a couple of non-fiction articles and one book for the educational market to my credit, but I’ve caught the fiction bug and am attempting the leap from nonfiction to fiction. I’d be grateful for any suggestions you have on learning to write humor.

Great question, and one I don’t remember addressing before. 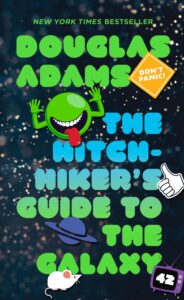 Let’s first distinguish between two types of book-length fiction: the humorous novel and the novel with humor. In the former case, the whole enterprise is based on getting laughs. Douglas Adams’ The Hitchhiker’s Guide to the Galaxy is a prime example. In the latter type of novel, humor is used for what the dramatists call “comic relief.” Shakespeare employed this device frequently, most famously with the gravediggers in Hamlet.

As to the first type, I don’t have anything to offer, except: proceed with caution. It takes a rare talent—like a Douglas Adams or a Carl Hiaasen—to succeed with this kind of novel. Also note that comic novels don’t sell much as compared to their more serious cousins. Early in his career Dean Koontz tried his hand at a humorous novel, a la Catch-22, and determined this was not a genre that paid. Since going serious, with humor sprinkled it, Mr. Koontz has made a few bucks.

So let’s talk about humor used on occasion in an otherwise serious novel. Why have it at all? Comic relief, as the name implies, is a spot within the suspense where the audience can catch its breath. It delivers a slight respite before resuming the tension. It’s sort of like the pause at the top of a roller-coaster. You take in a breath, look at the nice view and then…BOOM! Off you go again. It adds a pleasing, emotional crosscurrent to the fictive dream, which is what readers are paying for, after all.

I see three main ways to weave humor into a novel: situational, descriptive, and conversational.

You can insert a scene, or a long beat within a scene, that takes its comic effect from the situation the character finds himself in. For an example I turn to the great Alfred Hitchcock, who almost always has comic relief in his masterpieces of suspense.

Like the auction scene in North by Northwest. Roger Thornhill (Cary Grant) has been mistakenly tagged as a U.S. secret agent by a group of bad guys. At one point, Thornhill walks into a fancy art auction to confront the chief bad guy (James Mason). But now he’s stuck there with three deadly henchmen waiting in the wings to send him to the eternal dirt nap.

So Thornhill hatches a plan. Act like a nut and cause a commotion so the cops will come in and arrest him, saving him from the assassins. This is how it goes down:

How do you find situational humor? You look at a scene and the circumstances and push beyond what is expected. Most humor is based upon the unexpected. That’s what makes for the punch line in a joke, for example. So make a list of possible unexpected actions your character might take or encounter, and surely one of them will be the seed of comic relief.

When you are writing in First Person POV, the voice of the narrator can drop in a bit of humor when describing a setting or another character. The master of colorful description was, of course, Raymond Chandler, through the voice of his detective, Philip Marlowe:

It must have been Friday because the fish smell from the Mansion House coffee-shop next door was strong enough to build a garage on. (“Bay City Blues)

It was a blonde. A blonde to make a bishop kick a hole in a stained-glass window. (Farewell, My Lovely)

The girl gave him a look which ought to have stuck at least four inches out of his back. (The Long Goodbye)

For descriptive humor, listen to your character. Use a voice journal to let the character riff for awhile. You’ll unearth a nugget or two of descriptive gold.

Dialogue presents many possibilities for humor. First, you can create characters who have the potential for funny talk. Second, you can take create conversational situations where such talk is possible. I had two great aunts who lived together in their later years. They had a way of subtly sniping at each other over minor matters, which was always a source of amusement to me. So I put them in my thriller, Long Lost, as two volunteers at a small hospital:

Just inside the front doors, two elderly women sat at a reception desk. They were dressed in blue smocks with yellow tags identifying them as volunteers. One of them had slate-colored hair done up in curls. The other had dyed hers a shade of red that did not exist in nature.

They looked surprised and delighted when Steve came in, as if he were the Pony Express riding into the fort.

They fought for the first word. Curls said, “May I help—” at the same time Red said, “Who are you here to—”

They stopped and looked at each other, half-annoyed, half-amused, then back at Steve.

And spoke over each other again.

“Are you hurt?” Curls said.

“Our emergency entrance is around to the side,” Red said.

“Oh, but we just had a shooting,” Curls said.

“Not stinking,” Curls said. “Stinko. He was drunk.”

“When you’re drunk you can stink, too,” Red said.

I think you can develop an ear for this kind of humor by soaking in the masters of verbal comedy. Start with Marx Brothers, especially their five best movies: The Coconuts, Animal Crackers, Monkey Business, Horse Feathers, Duck Soup.

Listen to the classic conversational routines of Bob Newhart (available on YouTube). My favorite is “The Driving Instructor.”

Also on YouTube: Bob & Ray. The great thing about their skits is how they play them with dead seriousness. That’s where the humor comes from, which is a lesson for writers. This isn’t about jokes. It’s about natural humor found in a fully developed dramatic situation.

If you want to do some reading on the subject, you might pick up a copy of Steve Allen’s How to Be Funny. Allen was one of the great verbal wits.

There’s also a little gem of a book on writing comedy. It’s the nearly-lost wisdom of Danny Simon, Neil’s older brother (whom Neil and Woody Allen both credit with teaching them how to write narrative comedy). Danny Simon never wrote a book on the subject. He did teach a famous comedy writing class in Los Angeles. Thankfully, one of his students took copious notes and organized them for posterity. That student was me, and the little book is here.

The floor is now open for discussion on these matters. Meanwhile, I can’t resist leaving you with my all-time favorite Bob & Ray routine. Enjoy!