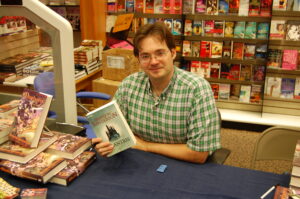 Have you heard about what Brandon Freaking Sanderson is doing? As they used to say in the 60s, “It’ll blow your mind, man.”

Last Tuesday Sanderson made a “surprise announcement” via YouTube, telling his fans that over the course of the last two years he has produced four—count ’em, four—“secret” novels. Instead of releasing these books through a traditional publisher, Sanderson is running a Kickstarter campaign to sell directly to his readers. The books will be delivered each quarter in 2023. And not just books. At certain levels supporters receive a box of Sanderson swag in each of the other eight months.

When you run a Kickstarter, you choose a minimum goal for your campaign. If you don’t hit it, the pledges aren’t collected. Sanderson set his goal at $1 million.

In one day his pledges hit $15 million.

In three days he raised over $20 million (from 84,600 backers) and officially became the most successful Kickstarter in history. And the campaign is open until the end of the month!

It doesn’t stop there. After the books are delivered, Sanderson will turn around and license those rights to a traditional publishing company and reap those royalties, too.

This is, in short, an awesome display of how to exploit intellectual property.

However, some things to keep in mind at this stage of my post.

If that is so, why am I bothering to write about this? First of all, it’s publishing news. It’s viral. And it’s amazing. Just thought you’d like to hear about it if you haven’t already.

Second, to get to the basic reasons why Brandon Sanderson is able to do this, note that he is: a) a very good writer; b) prolific; and c) nurturing of his fans.

Thus, while very few writers ever get to the Sanderson level, we can do the same three things within our own sphere. To wit:

You know me. I believe in a never-ending self-improvement program for writers. We expect that from doctors and plumbers; why should we not expect it from artists who ask us to spend money on them?

Write, study, write, get feedback, improve. Write. That’s how you get to be good.

Brandon Sanderson is a writing monster. I mean, not only has he written his own epics, he hired on to complete another massive series after the original author died! (The Wheel of Time books).

Not many of us have the time to produce on that scale. But we can all produce with the time we have. I’ve said it often here and in my workshops, and I still consider it the best piece of advice I got as a new writer—write to a quota. I put it this way: figure out how many words a week you can comfortably produce. That means what you can write without turning the rest of your world—family, friends, day job—into a maelstrom of stress, anxiety, recrimination, illness or the desire to overeat.

Be easy on yourself. Find your comfort zone, then up that total by 10% as a stretch goal. Make this a weekly quota divided into six days. That way, if you miss a day, you can make it up by writing a little more on the other days. Take one day off to recharge.

If you miss your weekly number, forget about it. Start your new writing week fresh.

As your readership grows, find ways to connect with your audience. You can do this by:

Could I do more? Yes, but I’ve calculated the cost/benefit for me is ultimately negative. I want to spend most of my creative capital writing more books.

As a final thought, I’m sure many writers look at the Sanderson numbers—and the numbers of many others in a higher income level—and feel some variation of envy over the money being made. Don’t let that happen. Every writer wants to make good dough and therefore has to utilize business thinking to one degree or another. But that degree depends on your personality and what kind of life you want to live.

For example, the quest for success can wreak havoc on personal relationships (you could have asked any one of Norman Mailer’s six wives about that). Money is a powerful motivator but can also be a menacing siren. As a wise Nazarene carpenter once observed, “Be on your guard against all kinds of greed—life does not consist in an abundance of possessions.”

On the other hand, a writer who creates without even a sideward glance at the market should not later howl at the moon because his stuff doesn’t sell.

Balance is the key. It’s different for each of us. I feel, after over 25 years in this game, that I’ve found my sweet spot. That doesn’t mean I don’t continue to learn and explore ways to increase my revenue. But I don’t run after every money-making morsel like a hungry ferret. Thus, don’t look for me on Kickstarter or doing dance videos on TikTok (my daughter is greatly relieved).

And whenever doubts or disappointments start to creep in—Am I doing enough? Am I fooling myself? Will I ever be as successful as ____? Or even ____?—determine to write just one more sentence…and write it!  Then write the one after that. Get lost again in the joy of making stuff up. That is your safe haven, your home sweet home.

The questions for the day are as follows: Do you have an idea of what kind of balance you want from your writing life? Do you feel stress about any aspect of it? How would you describe your ideal writing profile?