The other day, I ran into Albert King.

Bert King is my old adversary—a highly-respected and learned defense lawyer with a Harvard degree (Mensa fellow) and an honest, ethical, and realistic streak—a treasured leftover from my detective days when we civilly duked it out in the courtroom. 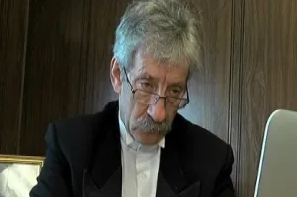 Bert and I stood on the street corner and BS’d. Here were two retired legal foes reminiscing the times—who’s still in jail, who finally made parole—bitching about a stupidly screwed system and the hopelessly dysfunctional new breed of Woke cops and counsels. Then our stuff turned to hilarious things we’d seen and heard within the hallowed halls of honor.

One of the great moments Bert and I remembered took place in our city’s historic courthouse. It’s a beautiful stone building with maple woodwork and regal red carpeting. It was a hot summer day, and the ancient sheriff nodded off during a jury trial. He snapped awake, then gawked—the prisoner dock was vacant.

“M’Lord!” he exclaimed. “The prisoner has escaped!” “Relax, Mister Sheriff,” the judge replied, looking over his glasses. “The accused is in the witness box and has been testifying on his own behalf for the past twenty minutes.”

Then there was the time I was in that witness box during one of the most vicious double murder trials of my career. I was under cross-examination by this big-shot, downtown lawyer (not Bert) who was grandstanding—waving his hands like a traffic cop on meth.

Then Kay stopped. She winked at the jury, and Kay handed Mr. Barrister the roll. The entire courtroom broke out laughing, and the judge wisely declared a recess. 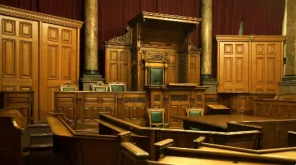 I’ve seen melt-downs and make-ups, mockeries and manhandlings in the courtroom. I’ve heard a judge slurring words, seen a prosecutor quit in a toddler’s tantrum, a clerk split his pants, and an accused do an impressive stand-up comedy routine acting in his own defense. I’ve seen and heard some crazy, funny things in that public place of prosecution and protection of personal rights. No, it’s not always pomp and pious.

So, I thought I’d lighten up the Kill Zone today and share some courtroom comedy I’ve dug up. Hewe whar whacky woowds from whondeful whizads of wegal wisdom. (Said in a Porky Pig voice. Or Barry Kripke, if you’re a Big Bang Theory fan.) They may be true. And they may not be true. Typical of what you’d hear in a courtroom comedy.

Judge addressing the jury: “Now, as we begin, I must ask you to banish all present information and prejudice from your minds, if you have any.”

Lawyer: “Now sir, I’m sure you are an intelligent and honest man.”
Witness: “Thank you. If I weren’t under oath, I’d return the compliment.”

Lawyer: “Do you know how far pregnant you are now?“
Witness: “I’ll be three months on November 8.”
Lawyer: “Apparently, then, the date of conception was August 8?“
Witness: “Yes.”
Lawyer: “And what were you doing at that time?“

Lawyer: “Have you lived in this town all your life?“
Witness: “Not yet.”

Lawyer: “So, after the anesthesia, when you came out of it, what did you observe with respect to your scalp?“
Witness: “I didn’t see my scalp the whole time I was in the hospital.”
Lawyer: “It was covered?“
Witness: “Yes, bandaged.”
Lawyer: “Then, later on…what did you see?“
Witness: “I had a skin graft. My whole buttocks and leg were removed and put on top of my head.”

Lawyer: (realizing he was on the verge of asking a stupid question) “Your Honor, I’d like to strike the next question.“

Lawyer: “You say that the stairs went down to the basement?“
Witness: “Yes.”
Lawyer: “And these stairs, did they also go up?“

Judge addressing the accused: “How do you plead before I find you guilty?”

Lawyer: “Are you married?“
Witness: “No, I’m divorced.”
Lawyer: “And what did your husband do before you divorced him?“
Witness: “Apparently a lot of things I didn’t know about.”

Lawyer: “What was the first thing your husband said to you when he woke that morning?“
Witness: “He said, ‘Where am I, Cathy?‘”
Lawyer: “And why did that upset you?“
Witness: “My name is Susan.”

Lawyer: “When he went, had you gone and had she, if she wanted to and were able, for the time being excluding all the restraints on her not to go, gone also, would he have brought you, meaning you and she, with him to the station?“
Other Lawyer: “Objection. That question should be taken out and shot.”

Lawyer: “Now, Doctor. Isn’t it true that when a person dies in their sleep they wouldn’t know anything about it until the next morning?”
Witness: “Did you actually pass the bar exam?”

And no courtroom comedy post would be complete without a lawyer joke.

A Mafia Don discovers his bookkeeper ripped him for ten million bucks. His bookkeeper’s deaf—that was the reason he got the job in the first place—the Mafioso assumed a deaf bookkeeper wouldn’t hear anything that he might have to testify about in court. So when the Don goes to confront the bookkeeper about his missing $10 million, he brings along his lawyer, who knows sign language.

The Don tells the lawyer, “Ask him where the 10 million bucks he embezzled from me is.”

The lawyer, using sign language, asks the bookkeeper where the money is.

The bookkeeper signs back, “Don’t know what you are talking about.”

The lawyer tells the Don, “He says he doesn’t know anything about what you’re talking about.”

The Don pulls out a handgun, puts it the bookkeeper’s temple, and says, “Ask him again.”

The lawyer signs to the bookkeeper, “He’ll kill you if you don’t say.”

The bookkeeper signs back, “Enough! Money’s in a brown briefcase, buried behind the shed in my cousin Enzo’s backyard in Queens!”

The Don asks the lawyer, “Well, what’d he say?”

The lawyer replies, “He says you don’t have the balls to pull the trigger.”

Kill Zoners – Over to you. Share your courtroom comedy stories!