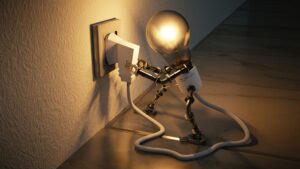 If I may riff off Brother Gilstrap’s recent post, I think there are generally two types of writers. There are “natural” storytellers. John is one of them. I think he’s shared this here on TKZ, but I remember him telling me about getting virtually the entire story for Nathan’s Run while on a long drive. How’s that for nice?

Other writers have to dig in hard ground to find, stimulate, and coax ideas. Then take the good ones to the workshop and figure out the best way to develop them into stories. That would be me. When I started out on this writing journey I dove into study of the craft. I devoured writing books and subscribed to Writer’s Digest. I read popular fiction analytically to unpack how successful writers did things. I studied movies with an eye toward learning structure.

And when it came to finding ideas worth turning into full-length fiction, I found I couldn’t sit there waiting for one to show up. I had to follow Jack London’s advice: “Don’t loaf and invite inspiration; light out after it with a club.”

Early on I read How to Write Best Selling Fiction by Dean Koontz. He has a section in there on finding story ideas. Among his suggestions:

Read widely. Newspaper stories can present the germ of an idea. Nonfiction on various subjects, too.

Write narrative hooks. Just sit at the keyboard and type hooks (first lines) until “you find one that is so intriguing that you simply must find out what happens next.” One day Koontz wrote:

“You ever killed anything?” Roy asked.

He had no idea who Roy was or what he meant. But he sat there looking at it and it came to him (“out of my subconscious mind”) that Roy should be a boy of fourteen. From there his imagination started chugging and he wrote two pages of a conversation between Roy and a boy he named Colin. When he was finished he knew the book was going to be about the duality of human nature (good and evil), that Roy was the villain, and that the book would be fast-paced and suspenseful. Indeed it was, and became an early bestseller called The Voice of the Night.

Titles. Write out titles by the bunch until one of them tickles your fancy.

Characters. Start writing about an intriguing character and pile on backstory details. When one starts to take on life, ask:

So I scheduled a weekly creativity time. A half hour to an hour sitting in a local coffee joint doing these exercises, just letting the ideas flow. After a few weeks I noticed that my creativity muscle was growing stronger. Indeed, it began working “on its own.” I’d be driving down the street and see a billboard and suddenly I’d be asking What if? What if that happy couple clinking champagne glasses is about to be blown up by a bomb?

I kept all my ideas in a file. When one of them cried out for further attention I put into “development.”

My first step in the development process is what I call a “white hot document.” This idea comes from Dwight Swain’s classic Techniques of the Selling Writer. You start a document that is an exercise in “focused free association.” You just start writing what comes to mind, go off on tangents, explore rabbit trails. Ideas for scenes, themes, characters, plot developments—write them all down without any intrusion from your inner editor.

You put this aside and come back the next day to edit and annotate. You take what’s most emotional and exciting for you and develop it further with more free association. Do this for several days and you’ll have a solid foundation for a plot. Swain wrote: “The important thing, always, is not to sit idly waiting for the feathers to grow. Don’t just hope for ideas. Hunt them down! Find a springboard! Develop a plan of action!”

So unless you are a natural storyteller, make it a point to exercise your imagination on a regular basis. Play games. Go wild. You’ll find good ideas soon enough and your creativity synapses will grow stronger.

What kind of storyteller are you—natural or a digger in hard ground? Where do your ideas come from? Do you wait for them to show up or do you light out after them with a club? 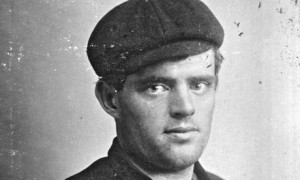 Once I made the decision to become a writer, I went after it with everything I had. There would be no going back, no surrender. In this I found myself feeling like one of my writing heroes, Jack London.

London was a self-taught writer who achieved success through an iron will and disciplined production. He also wrote one of the best novels about a writer, the largely autobiographical Martin Eden. There are long sections that get inside the writer’s mind and heart, and also chronicle London’s own efforts as a young man struggling to teach himself to write fiction. I thought I’d share a few of those with you today.

[Martin] went farther in the matter. Reading the works of men who had arrived, he noted every result achieved by them, and worked out the tricks by which they had been achieved—the tricks of narrative, of exposition, of style, the points of view, the contrasts, the epigrams; and of all these he made lists for study. He did not ape. He sought principles. 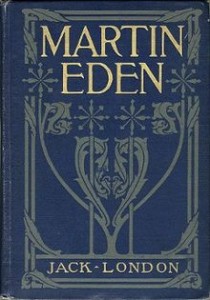 He drew up lists of effective and fetching mannerisms, till out of many such, culled from many writers, he was able to induce the general principle of mannerism, and, thus equipped, to cast about for new and original ones of his own, and to weigh and measure and appraise them properly.

When I started my writing journey I went to a local used bookstore and picked up an armload of thrillers by King, Koontz, Grisham and others. As I read these books I marked them up, wrote in the margins, talked to myself about what I was discovering, made notes about the techniques—sometimes on napkins or other scraps of paper. I still have all these, by the way.

In similar manner he collected lists of strong phrases, the phrases of living language, phrases that bit like acid and scorched like flame, or that glowed and were mellow and luscious in the midst of the arid desert of common speech. He sought always for the principle that lay behind and beneath. He wanted to know how the thing was done; after that he could do it for himself. He was not content with the fair face of beauty. He dissected beauty in his crowded little bedroom laboratory, where cooking smells alternated with the outer bedlam of the Silva tribe; and, having dissected and learned the anatomy of beauty, he was nearer being able to create beauty itself.

I have a notebook full of examples of great flights of style. I’ve copied, by hand, passages I’ve admired. The object was to get the sound of sentences in my head and expand my stylistic range.

You ought to do the same. Re-read and even speak out loud examples of what John D. MacDonald called “unobtrusive poetry” in the narrative.

You Can’t Learn to Write Just By Writing

He was so made that he could work only with understanding. He could not work blindly, in the dark, ignorant of what he was producing and trusting to chance and the star of his genius that the effect produced should be right and fine. He had no patience with chance effects.

This resonates with me, because I’ve often heard the advice that you should shun craft study and just write. Like you should shun medical school and just perform surgery. I did a whole post on this, and refer you there.

Beware the Perils of Pure Pantsing

He wanted to know why and how. His was deliberate creative genius, and, before he began a story or poem, the thing itself was already alive in his brain, with the end in sight and the means of realizing that end in his conscious possession. Otherwise the effort was doomed to failure.

Jack London knew what he wanted before he started to write. He had plot before beginning and developed the tools to pull it off. Now, I love all you pantsers out there. I want you to succeed. Just beware the perils and trust that your left brain is actually part of your head, too. Give it a listen every once in awhile.

But Don’t Choke Off Inspired Moments

On the other hand, he appreciated the chance effects in words and phrases that came lightly and easily into his brain, and that later stood all tests of beauty and power and developed tremendous and incommunicable connotations. Before such he bowed down and marveled, knowing that they were beyond the deliberate creation of any man. And no matter how much he dissected beauty in search of the principles that underlie beauty and make beauty possible, he was aware, always, of the innermost mystery of beauty to which he did not penetrate and to which no man had ever penetrated.

There are time that something may “work” even if you don’t know why. So go with it, try it, let that character or section of prose fly off your fingertips. Just be ready to “kill the darling” if enough people tell you it ain’t working. I’ve reached for many a metaphor that my lovely wife has told me is more confusing than enlightening. She is almost always right about this.

He knew full well … that the mystery of beauty was no less than that of life—nay, more that the fibres of beauty and life were intertwisted, and that he himself was but a bit of the same nonunderstandable fabric, twisted of sunshine and star-dust and wonder.

The story of Martin Eden proceeds from this point to a tragic ending. I think it’s because Martin failed to follow his sense of beauty to a Source, and instead succumbed to a meaningless Nietzschean void. That matter is best discussed in a classroom.

For our purposes, keep the magic alive in your writing. Don’t you love being a writer? Doesn’t it feel sometimes that you are made up of sunshine, star-dust and wonder? Yes, there are also times you feel like the tar on the bottom of a dockworker’s boot, but you accept that as the price for feeling the other, don’t you?

How are you teaching yourself to write?

How are you embracing the wonder?

[Note, I’m traveling home from ThrillerFest today, so may not be able to comment much. Talk amongst yourselves!]