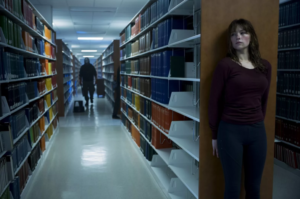 Happy Thanksgiving to one and all! That said, I have to say that it is extremely inconsiderate of Abraham Lincoln to have scheduled a time-consuming national holiday near the closing stretch of everyone’s NaNoWriMo effort (I mean, the nerve!).  I do, however, have an entertaining suggestion to get you back on your creative track after you have finished dinner. It is also a very basic but extremely well done example of showing instead of telling.

Show, not tell. How often we hear those three words. We often find ourselves telling instead of showing, however, during our writing. It’s understandable because more it’s easier to write “Jack is tall” as opposed to “Jack was easy to spot. To say he looked like Gulliver among a roomful of Lilliputians would be an exaggeration, but not by much”  is harder, but it reads better and begins to set up the locale of your story. That isn’t the post-Thanksgiving creative jumper and example I was talking about, however; no, that would be a film titled Kristy, a slasher film for folks who don’t like slasher films.

Kristy is a very low budget holiday horror film (currently streaming on Netflix) that gets its money’s worth out of every production dime it spent.  The film stars Haley Bennett, who is currently prominently featured in the film adaptation of The Girl on the Train. If I were pitching the idea for Kristy I would call it “Die Hard goes to school.” The premise is fairly basic. A young woman named Justine unexpectedly finds herself alone on her small, rural college campus (but for a couple of  policemen) over the Thanksgiving holiday when she is unexpectedly pursued with great malice and bad intent by a group of masked individuals who insist on calling her “Kristy.” It’s a slow boil for the first half or so of the film, as we watch Justine bid her friends farewell and  go through the paces of studying, getting dinner from a vending machine, doing laundry, and some other mundane things. That first half is also the most important part of the movie, because we learn about Justine. I could tell you, but Kristy SHOWS you what she is studying and what one of her extracurricular activities is (two things that become very important during the second half of the film). Examples abound. The body language between Justine and Aaron, her boyfriend, during the short course of their post, pre-holiday boombah shows two people who aren’t quite on the same page of their relationship without a word being mentioned. Justine conveys compassion, courtesy, and angst with a sentence or a look; the long camera shots up the (initially) quiet and secluded dormitory corridors, with room doors cheerfully decorated create an atmosphere of solitude and loneliness. By the time that Justine attracts the attention of a group of murderous sleazoids when she makes a trip to a local convenience store we pretty much know that she is not the daughter of an Army Ranger who taught her everything she knew.  That doesn’t mean that she doesn’t know anything about defending herself. She just needs to apply what she knows to the matter of defending herself…if she can. If you pay attention to the first half of the movie, you’ll know what she can do, if the creeps don’t get her first.

Yes, there is violence during Kristy, but it’s not gratuitous (well, not entirely). While I wouldn’t let the youngsters watch it I wouldn’t let them watch Old Yeller, either. Kristy has a happier ending. Oh, and if you hate movies where a guy comes in and saves the damsel in distress you will absolutely love Kristy. The reason that I mention it here, however, is that it’s instructive in showing rather than telling, and entertaining too. The reason that I mention it now is that…well, it’s a Thanksgiving  holiday movie with a warm ending. Heh heh heh.

Again, Happy Thanksgiving, whether you take my recommendation or otherwise. Your turn now. What was your best or worst Thanksgiving? My best was in 2006 when my granddaughter was born. My worst was in 1994 when I set my kitchen on fire making dinner. You? And if you have had a Thanksgiving holiday like Justine, please share.