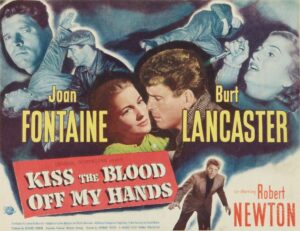 My favorite genre for pure reading pleasure is the pulp and mass market crime fiction of the golden age—roughly 1929 (the year The Maltese Falcon was published) to the early 1960s (when secret agents started to take over). Some of the titles from that period reach out and grab you by the lapels. A couple of my faves:

I Wake Up Screaming. This is a noir by Steve Fisher, first published in 1941 and made into a fine film starring Victor Mature, Betty Grable, and Laird Cregar.

Kiss the Blood Off My Hands. How’s that for a grabber? This was British noir by a writer named Gerald Butler. It came out in 1947 and was turned into a movie starring Burt Lancaster and Joan Fontaine. The novel itself is a dark but riveting read with a surprise ending. In form and feel it reminded me of The Postman Always Rings Twice. Speaking of which, where in the heck did that title come from?

In the preface to Double Indemnity, Cain wrote that the title comes from a conversation he had with the screenwriter, Vincent Lawrence, who spoke about the anxiety he felt when waiting for a postman to bring news about a submitted transcript. He would know when the postman arrived because he always rang twice. Lawrence described being so anxious that he would retreat to the backyard to avoid his ring. The tactic failed. Even from the backyard, if he failed to hear the first ring, he always heard the second. Always.

This conversation birthed a title that became a perfect metaphor for Frank and Cora’s situation.

“The Postman” is God, or, Fate who “delivers” punishment to Frank and Cora. Both missed the first “ring” when they got away with the initial killing. However, the postman’s second ring is inescapable; Frank is wrongly convicted of Cora’s murder, and sentenced to death. The motif of inescapable fate is also evident in the Greek’s initial escape from death, only to succumb to the second attempt on his life.

So let’s talk a bit about how to come with titles for your books.

As with any creative pursuit, the way to get a good idea is to get lots of ideas, then toss out the ones you don’t like. Thus, when you do title brainstorming, don’t edit yourself. Let the titles flow!

In How to Write Best-Selling Fiction, Dean Koontz talks about his method of title-storming. He uses the example of a story he was going to write about dragons. He just started listing titles with Dragon it them:

He went on to different variations, such as The Dragon Creeps and The Dragon Walks.

After about forty titles he got to this: The Dragon Came Softly. And then he tweaked it to: Soft Come the Dragons.

And that was the title that set off lights for him—and sold.

1. Create a list of single words related to your plot. Kill, blood, bomb, cop, detective, mother, father, child, darkness, kidnapping. Then spend some time riffing off each one, using them in several possible titles.

2. Come up with a word that is the potential theme of your book: Justice, revenge, love, hate, evil, good, God, the devil. Play with those. Mix and match.

3. Maxims or quotations might provide fodder for a title. There’s an Irish blessing that goes:

May the road rise up to meet you.
May the wind be always at your back.
May you be in heaven an hour
Before the devil knows you’re dead.

That became the basis for one of Lawrence Block’s Matt Scudder books, The Devil Knows You’re Dead.

4. Create a deep, dark secret in your protagonist’s life that you can work into a title. Example: The Silence of the Lambs by Thomas Harris.

How to Title Series Books

A title hook for a series is a good idea if you can pull it off. In my first Ty Buchanan legal thriller, I came up with the title Die Trying. Turns out Lee Child used that for one of his Reacher books. Instead of chucking it, I tweaked it and came up with Try Dying. I liked that for a number of reasons, and found a place in the book for that phrase. (That’s another tip. You can give a memorable phrase to a character in the dialogue, then use that phrase for the title. The title of the novel that was the basis for the classic noir Out of the Past is Build My Gallows High. That’s something the protag says to the femme fatale in both book and movie.) 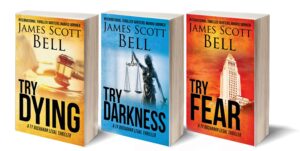 Then it occurred to me that Try could fit a series. So I wrote Try Darkness and Try Fear. I haven’t done a fourth, though many readers have asked me to. The reason is I feel Try Fear has the most perfect ending I’ve ever done and I am loathe to mess with it.

I do, however, have a list of a dozen more Try titles. I used to tell people that when I got down to Try the Veal I’d end the series.

Other well-known series hooks include the Prey books by John Sanford, and the color-coded Travis McGee books by John D. MacDonald.

Or use a character’s name. My current series features Mike Romeo, so it’s easy to do: Romeo’s Rules, Romeo’s Way, Romeo’s Hammer, Romeo’s Fight. When I get to Romeo’s Codpiece, I’ll stop.

Final note: Titles cannot be copyrighted, so you can use one that’s been done before, with the following exceptions:

1. Some titles are trademarked. You can’t use Chicken Soup for the Soul or Harry Potter, for example, without hearing from a lawyer.

2. Other titles are “effectively” trademarked. That is, they belong to books that are classics, or were such big hits that to purloin that title would cause massive blowback from fans and Amazon (which would not carry the book to avoid consumer confusion). So don’t title your book The Da Vinci Code or Mystic River.

But if all else fails, put Girl in the title.

So what is your approach to coming up with titles? Do you like to have a working title before you begin writing?