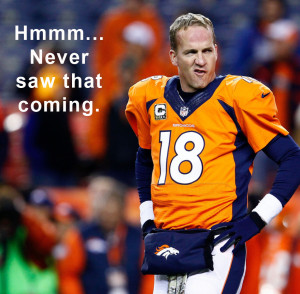 This suspense is terrible. I hope it will last.– Oscar Wilde

Sunday, I picked up the latest by a bestselling thriller writer and about halfway through, I realized it was sorta…unthrilling. So I put it aside and tuned into the Broncos-Colts game. I didn’t expect much in the way of entertainment here either because I knew this old story. I mean, Denver was 4-0 and Indianapolis was 3-5. Denver has Manning and Indy has, at best, a little Luck.

But lo and behold! The Colts were winning 17-0. Well, I thought, this is kinda interesting. So I stuck around. And then, Denver returned a punt 83 yards for TD.

Then Peyton Manning hit for a TD, Denver got a field goal and suddenly, we were all knotted up at 17-all. Early in the fourth quarter, Andrew Luck threw a TD but Manning answered with one of his own and we were tied again! Until Adam Vinatieri, who is 95-years-old and never misses despite having only seven toes, kicked a field goal putting the Colts ahead by three!

Six minutes left. But I was definitely not turning this one off now because Denver was driving. And how’s this for a twist? Peyton was only 30 yards away from becoming the leading passer of all time, surpassing Brett Favre!

OH MY GOD! Peyton is picked off!

Can the Colts hang on? There’s four minutes left and Frank Gore is running the ball but he’s 105-years-old and has a habit of putting the rock on the ground. Denver uses its last time out. But here is the back story that I already know about this drama: Peyton leads the league with 43 fourth-quarter comebacks.

Can he do it again? Will he break the passing record? Will the Broncos stay perfect? Will Frank cough up another hairball like he did last week?

The suspense was killing me.

Frank is tackled on third down. Ninety seconds left! Peyton’s going to get the ball back! Wait! Is that a flag? Some guy named Aqib Talib poked a Colt in the eye and Denver gets flagged for unsportsmanlike conduct!

Now that was suspense. After that, I had no desire to go back to my book. Because despite the book’s stellar blurbs and the reputation of the author as the Master of the Twist, it wasn’t near as good as that football game.

The game was classic David and Goliath with a little Joseph Campbell The Hero’s Journey thrown in, yet it still went against my expectations. It had a good mix of pacing, with zip-fast passing attacks and slow grind-it-out running. It had setbacks and surprises. It had heroes and eye-gouging villains. And just enough twists to keep me guessing.

A good sports game has a lot in common with a good book or movie. Sitting on your barstool watching Daniel Murphy commit that error in game four and wondering if the Mets are doomed. Sitting in the triplex watching The Fugitive and wondering if Harrison Ford is going to jump off the dam. Or turning just one more page to find out if Amy is alive or is the girl gone for good. They are all related.

There’s the old Hitchcock formula: 1. A couple is sitting at a table talking. 2. The audience is shown a time bomb beneath the table and the amount of time left before it explodes. 3. The couple continues talking, unaware of the danger. 4. The audience eyes a clock in the background.

The surprise, Hitchcock said, didn’t come from the bomb itself; it came from the tension of not seeing it.

Speaking of formulas, there actually is one for suspense:

I didn’t make this up, believe me. It was created by Emir Kamenica and Alexander Frankel of the University of Chicago Booth School of Business. It is basically an equation about time and expectations: “t” represents the period of time a moment of suspense is occurring, “E” is the expectations at that time, the Greek mu indicates your belief in the next thing to happen, the +1 is your belief in the future, the tilde represents uncertainty, and the subtracted mu is the belief you might have tomorrow.

That made your brain hurt, right? Mine, too. But hey, you sat through my football metaphor, so stay with me a little longer. The Chicago guys also developed a formula for surprise, which is easier to stomach for us math-challenged types. It boils down to this: what your beliefs are now minus what your beliefs were yesterday.

Their paper “Suspense and Surprise” (co-written with Northwestern University economics professor Jeffrey Ely) was published in the “Journal of Political Economy.” It was inspired by their observation that in various types of entertainment – gambling, watching sports, reading mysteries – people don’t really WANT to know the outcome.

What they DO want is a “slow reveal of information.” As one of them put it in an article in the Chicago Tribune: “To be exciting, we found that things need to get dull.”

Information revealed over time generates drama in two ways: suspense and surprise. Suspense is all about BEFORE, ie something is going to happen. (the ticking bomb under the chair). Surprise is about AFTER, ie you’re surprised that something unexpected happened. (the bomb didn’t go off!) If you are led to believe one thing is going to happen (Broncos will win!) but then are surprised by the unexpected (Colts prevail!) that can be pretty powerful.

So how do you translate this to your own writing?

I’ll let Kamenica explain. He goes back to the Hitchcock formula: “Let’s take that idea and ask a mathematical question: How much suspense can you possibly generate?’ Putting that bomb there generates suspense, but how long can you leave it there? Can you leave it the duration of the movie? Or is that boring? Once you put it there, when do you decide for it to go off? One-third of the way through? One-half? If I am invested, as a viewer, how frequently should uncertainty be resolved? You have a threat, information that (a bomb) will explode, then it gets resolved, the movie continues. But will these people survive the next danger? How often can you do that — change an audience view?”

He has the answer, of course: Three times.

“Say you are writing a mystery,” Kamenica goes on in the Chicago Tribune article, “Zero twists is bad. And one thousand twists is also bad — again, for something to be exciting, it must occasionally become boring. So, three. The math delivers surprisingly concrete prescriptions. That number is constrained to a stylized view, characteristic mystery novel: Is it the maid or butler who did it? Does the protagonist live or die? A novelist must lead you in one direction then …”

Added his colleague Frankel: “The thing is, we also found that you can’t really have a definite number of twists. Three is average. Yet if you know there are three twists, those twists are not actually twists — you are now waiting for the twist.”

And that, to me, is the major lesson here. Not that your book must conform to a three-twist formula. Because if your readers know you have three twists, you’ve lost the suspense. The lesson, to me, is less might just be more.

That’s why I gave up on that book I was reading. Its pacing was overly frenetic, with no slow moments for me to catch my breath. And the writer — excuse me, Master of the Twist — was so intent on forcing me through one more complication, one more bend in the road, one more plot gymnastic, that I began to anticipate his next move. I put the book down because the enjoyment was gone. The fun was leached away. The thrill was gone.

So maybe it comes down to this: If you want to be thrilling, you also have to be willing to be boring very so often.