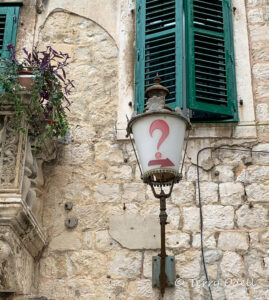 I’m back on my mountain after a 12-day “vacation.” (Can writers ever take vacations?) I was part of a photography tour of the Dalmatian coast, starting in Split and ending up in Dubrovnik (with an add-on day to Bosnia & Herzegovina). I’m recapping some ‘travel’ bits on my own blog, but this is a writing blog, so I’ll talk about the trip from a writer’s perspective.

In my current WIP, one of my main characters is an aspiring photographer, so I’ll be able to incorporate some of the lessons I learned into this book. Of course, I didn’t have to go to Croatia to learn these techniques, but as long as I was there …

However, this is about using travel for a book that hasn’t been written yet. Last time, I talked about things I’d be looking as writing fodder. While I don’t want to downplay the fantastic time I had on the trip, as writers we know that only trouble is interesting and it’s critical to create tension. With that in mind, here are some observations that might make it into the book I hope to write next.

Docking in ports. The ships line up parallel, often 5 deep, so you have to cross through them to get to the dock. “Minding the gap” could become an issue for a passenger with mobility issues. (You can click any of the images below to enlarge) 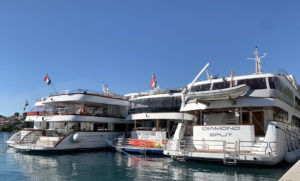 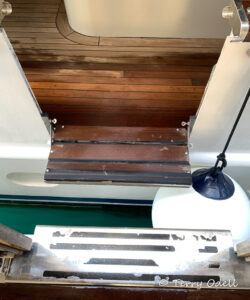 Language. That can be a biggie. I’m guessing most Americans aren’t as familiar with Slavic languages as they are with Latin-based ones. Even if you’re reading signs along with a tour guide, what she’s saying doesn’t look anything like what you’re seeing. Our phonics don’t work there.

The Croatian alphabet has the following additional letters: č, ć, dž, đ, lj, nj, š and ž but doesn’t have q, w, x, or y.
There’s a death of vowels (Island of Hvar, and Krka National Park) and they seem to toss Js in at random. 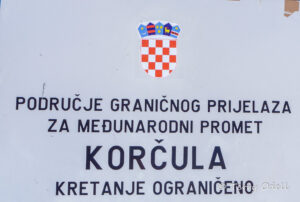 Hint: Download Google translate, set it to the language of the country you’re in, and you can use the phone’s camera to get a translation of writing. Great for notices on shopfronts, menus (although almost all have English translations), brochures, signage at venues. Schools start teaching English at an early age, so most people have a rudimentary grasp of the language, especially those in the service industry.

Okay, that’s enough “trouble.” A little more about the trip from the tourist standpoint.

Everyone was friendly. Our boat had about 30 passengers. Eleven of us were on the photo tour, and another couple was from England. The rest were Germans. The tour company used to give tours only in English, and international passengers were aware and dealt with it. Because of Covid, the company needed to expand its market, and offered dual-language tours. This meant that all communication on board and on our guided tours was given twice: once in English, once in German. I heard a lot of German growing up, although we didn’t speak it at home. I took two years of German in college. After a couple glasses of wine, enough of it came back so I could make myself understood to some of the German passengers. (Impressed the heck out of my son!)

The food was amazing. We had the typical European buffet breakfast every day, and lunches were four course fine dining meals. Any of the courses would have been a full meal for me. How our chef on board produced this in a tiny kitchen never ceased to impress.

Portions everywhere were huge. A personal pizza would feed two easily—and with Italy so close (now and historically), pizza was everywhere. So was gelato.

And perhaps Croatia’s most recent claim to fame (and a boost to its economy): Game of Thrones was filmed there. There are memorabilia shops, special guided tours, and LOTS of people taking pictures.

As someone who never watched the show, I simply admired the scenery and buildings for what they were, not what they pretended to be. 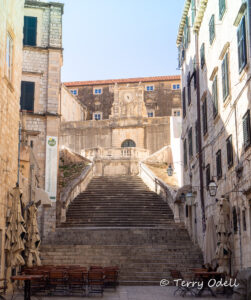 In closing. This was a photography trip for me, so I have been working on getting my images sorted, processed, and uploaded. If you’d like to see some of them,  I’ve started a slideshow, which is still getting updated. (Click the triangle at the top right to start the show.) A lot of these images are “assignments” from our instructor, so they’re not typical travel-brochure shots. He suggested we try things like car trails, close-ups, long exposures, low angles (hard on aging knees), monochrome, motion blur, multiple exposure, pan blur, panoramic, reflections, textures, varying depth of field. Can’t say I tried all of them, or was successful at the ones I tried, but it was a fun way to look at the country alongside of the history provided by our tour guides.

Notes to self. Take pictures of signs so you know where you were. Update a journal no matter how tired you are at the end of the day. Don’t expect your brain to work the way it does at home. Think of “conference brain” and how all the new input overloads it. I knew I wouldn’t be writing, so I brought along a printout of as far as I’d gotten in the current WIP, thinking I could do some preliminary editing. Despite reading the words, trying to fool myself into thinking I was editing turned out to be a wasted effort. So, it’s back to work I go.

Image by Rebecca Scholz from Pixabay

One last tidbit. Residents of the Dalmatian coast prefer German shepherds. Dalmatians, they say, are too much trouble.

All right, TKZers. Questions? Comments? Suggestions for others?