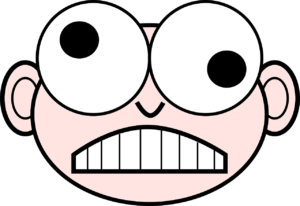 Terry’s recent post observed, “As writers, we don’t read the same way ‘normal’ people do. We have internal editors who insist on reading along with us and shouting their opinions.” That’s because we are attuned to the craft; we know the rules guidelines that should not be broken ignored lest we “pull” the reader out of the story.

Often these are little things. I call them speed bumps. The more there are along the story road, the less the reader will enjoy the ride. Much of my teaching is devoted to speed bump removal. The downside is that it’s harder for me to read just for pleasure. I can’t help lingering over the bumps I encounter and imagining ways they could have been eliminated.

This happened recently when I went back to re-read a novel in a popular series. I was only a few pages in when I got majorly bugged by something:

1. An eating scene that defies the laws of physics (and has no conflict)

In the first chapter the series hero sits down to dine with a client. A waitress comes to the table, takes their order and leaves. The two principals chat a bit. The speedy waitress returns with drinks. More chatting (about 30 seconds worth in read-aloud time) and the world’s fastest waitress, apparently working with the world’s fastest chef, came with our filets.

Another chat session (1 minute, 23 seconds) during which one character takes one bite of filet. Then: The waitress came to clear our dishes. We ordered creme brulee for dessert.

There follows two lines of dialogue. Two! Five seconds in real-world time. Then: The waitress came with the creme brulee.

Gadzooks! This waitress must be the only human to break the land speed record at the Bonneville Salt Flats…without a car!

Forty-three seconds more of chatting, then: My creme brulee was gone.

I’m sure many a reader would notice the same thing. Maybe not enough to toss the book aside, but it is so unnecessary and so easily fixed! Just a few lines of narrative summary sprinkled throughout would have sufficed. Something like: We lingered over our filets, talking about her past, her ex-husband, and the train she missed in Paris. By the time we were ready to order dessert, I thought I knew her as well as my own sister.

Plus, all the dialogue was friendly and informational. No conflict or tension. Thus, boring. Again, it would have been so easy to add a little argument, a disagreement, a bad vibe. (See my further notes on eating scenes.)

I read on, and got a feeling that bugged me further:

“To phone it in means to make the least effort possible, to do something without enthusiasm. The expression phone it in is American, and seems to have originally been connected to the theater and acting. During the early 1930s, a popular joke among theater actors alluded to having a role that was so small it was possible to call on the phone, rather than appear on the stage in person.”

When a series gets hugely popular, and both author and publisher know that any new book will automatically hit the top of the bestseller list, it becomes a temptation to phone it in. Put in the minimum effort and still rake in the dough. I once sat next to an author of this profile at a book signing event featuring several writers—known (him) and unknown (me). Since he was so prolific, I asked him about his work habits. He told me he writes a one-page outline and sends it to his publisher so they will send the rest of the advance. He then ignores the outline and takes a couple of weeks to dictate a book aboard his yacht. That’s about as close to phoning it in as you can get. And it is noticeable. The later books show it.

Look, there’s nothing illegal about not putting in the effort to write the best book you can, and still make bank. Heck, that may even be somebody’s version of the American dream. But it bugs me.

And so does this:

I admit the following is only a tiny speed bump, but it’s still a bump that doesn’t need to be there. So why have it at all? This is from the same novel, the third chapter, which is yet another eating scene:

The waitress came to our table with a coffee pot. “Coffee?” she said.

Well, who else would have said it? When you have an action beat before or after the dialogue, you don’t need the attribution.

“Take it away!” she said, waving her arms.

Better: “Take it away!” She waved her arms.

Brock plopped in a chair. “Whattaya want with me?” he asked.

Better: Brock plopped in a chair. “Whattaya want with me?”

Now, I like said. It’s a workhorse that does its job and gets out of the way. It’s just as much a mistake to never use said (only action beats all the time wear a reader out) as it is to use it needlessly.

So don’t do that, or I’ll get bugged.

There. I feel better now.

What little things bug you when you see them in a book?