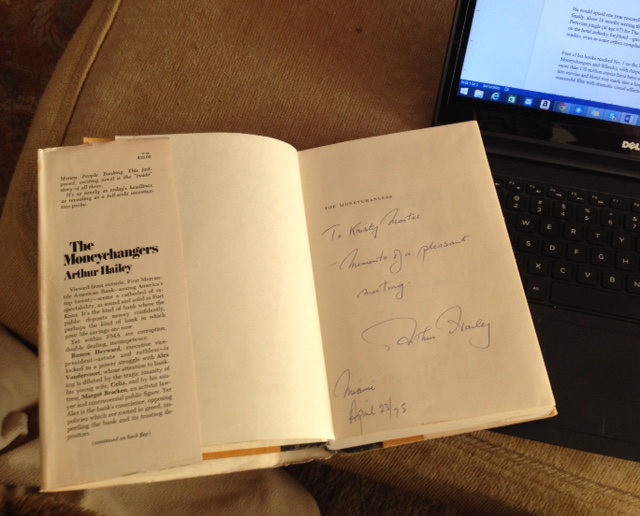 My signed first edition of Arthur Hailey’s The Moneychangers.

“A great book should leave you with many experiences, and slightly exhausted at the end. You live several lives while reading.” — William Styron

By PJ Parrish
We moved around a lot when I was a kid, and like a plant with shallow roots, I was always sending out feelers toward solid ground. I found it in libraries. I couldn’t always count on having the same address every year, the same classroom or even the same friends for very long. But I always could count on finding old faces and familiar places in the local library.

Paradoxically, it was in libraries where my love of exotic places and travel was born. No matter what was going on in my little life, I could escape to somewhere else by opening a book. My library card was my first passport.

Novels took me around the world, but they also taught me things — about history, religion, politics, philosophy, human psychology, medicine, outer space – filling in the gaps left by my spotty education. Even after I went to college, made my own money and settled down, novels remained my autodidact keys.

I learned about the American Revolution through John Jake’s Kent Family Chronicles. I studied medieval Japan through James Clavell’s Shogun. I was able to wrap my brain around the complex politics of Israel and Ireland after reading Leon Uris. James Michener taught me about Hawaii and Edna Ferber took me to Texas. Susan Howatch’s Starbridge series sorted out the Church of England for me. Ayn Rand made me want to be an architect for a while, or maybe a lady reporter who wore good suits. (I skimmed over the political stuff.)

And Arthur Hailey taught me to never buy a car that was made on a Monday.

I got to thinking about Hailey and all the others this week for two reasons: First, was an article I read in the New York Times about the Common Core teaching controversy (more on that later). The second reason was that while pruning my bookshelves, I found an old copy of The Moneychangers. This was one of Hailey’s last books, written after he had become famous for Hotel, Wheels, and that quintessential airport book Airport. I interviewed Hailey in 1975 when he was touring for The Moneychangers. I remember him as sweet and patient with a cub reporter and he signed my book “To Kristy Montee, Memento of a Pleasant Meeting.”

I had read all his other books, especially devouring Wheels, which was set in the auto industry of my Detroit hometown. Hailey, like Michener, Clavell, Uris et al, wrote long, research-dense novels that moved huge, often multi-generation casts of characters across sprawling stages of exotic locales (Yes, Texas qualifies). Hawaii, which spans hundreds of years, starts with this primordial belch:

Millions upon millions of years ago, when the continents were already formed and the principle features of the earth had been decided, there existed, then as now, one aspect of the world that dwarfed all others.

How could you not read on after that? But the main reason I loved these books was for their bright promise of cracking open the door on something secret. Here’s some cover copy from Hailey’s The Moneychangers:

Money. People. Banking. This fast-paced, exciting novel is the “inside” story of all three. As timely as today’s headlines, as revealing as a full-scale investigation.

Shoot, that could be copy written for Joseph Finder now.

Many of these books were sniffed off as potboilers in their day. (Though Michener and Ferber both won Pulitzer Prizes). But the writers were, to a one, known for their meticulous research techniques. Hailey spent a full year researching his subject (he read 27 books about the hotel industry), then six months reviewing his notes and, finally, about 18 months writing the book. Michener lived in each of his locales, read and interviewed voraciously, and collected documents, music, photographs, maps, recipes, and notebooks filled with facts. He would paste pages from the small notebooks, along with clippings, photos and other things he had collected into larger notebooks. Sort of an early version of Scrivener. 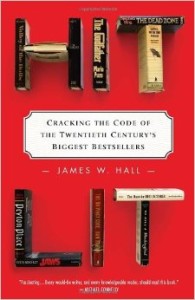 For my money, these books were a potent blend of entertainment and information, and they endure today as solid examples for novelists on how to marry research with storytelling. In his fascinating non-fiction book Hit Lit: Cracking the Code of the Twentieth Century’s Biggest Bestsellers, James W. Hall analyzes what commonalities can be found in mega-selling books. One of the criteria is large doses of information that make readers believe they are getting the inside scoop, especially of a “secret” society. The Firm peeks into the boardrooms of Harvard lawyers. The Da Vinci Code draws back the curtain on the Catholic Church. Those and all the books I cited delivered one thing in spades — the feeling we are learning something while being entertained.

Which brings me to Common Core.

This is an educational initiative, sponsored by the National Governors Association and the Council of Chief State School Officers that details what K–12 students should know in English language arts and mathematics at the end of each grade. I read this week that as part of the Common Core mandate, English teachers must balance each novel they teach with “fact” material –news articles, textbooks, documentaries, maps and such.

So ninth graders reading The Odyssey must also read the G.I. Bill of Rights. Eight graders reading Tom Sawyer also get an op-ed article on teen unemployment. The standards stipulate that in elementary and middle school, at least half of what English students read must be supplemental non-fiction, and by 12th grade, that goes up to 70 percent.

Now, I’m not going to dig into the politics of this. (You can read the Times article here.) And I applaud anything that gets kids reading at all. What concerns me is that in an effort to stuff as much information and facts into kids’ heads, we might not be leaving room for the imagination to roam free. As one mom (whose fifth-grade son came home in tears after having to read the Universal Declaration of Human Rights), put it, “If you look at the standards and what they say, nowhere in there does it say, ‘kill the love of reading.’”

One more thing, I then I’ll shut up:

There was a study done at Emory University last year that looked at what happens to the brain when you read a novel. At night, volunteers read 30-page segments of Robert Harris’s novel Pompeii then the next morning got MRIs. After 19 days of finishing the novel and morning MRIs, the results revealed that reading the novel heightened connectivity in the left temporal cortex, the area of the brain associated with receptivity for language. Reading the novel also heightened connectivity in “embodied semantics,” which means the readers thought about the action they were reading about. For example, thinking about swimming can trigger the some of the same neural connections as physical swimming.

“The neural changes that we found…suggest that reading a novel can transport you into the body of the protagonist,” said Gregory Berns, the lead author of the study. “We already knew that good stories can put you in someone else’s shoes in a figurative sense. Now we’re seeing that something may also be happening biologically.”