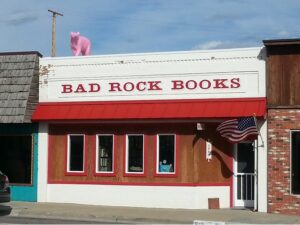 Montana fun facts: Montana is the fourth largest state but only has a population of one million.

The entire state has only one area code—406.

The little town of Livingston, Montana (pop. 7500+) claims more writers per capita than any other city in the U.S.

My favorite fun fact: Montana has more bookstores per capita than any other state.

Whatever the reason, Montanans love to read.

One of my favorite bookstores is Bad Rock Books in Columbia Falls, a small town on the way to Glacier National Park.

The name “Bad Rock” derives from nearby Bad Rock Canyon, a narrow mountain pass that’s bordered on one side by the Flathead River and sheer rock cliffs on the other. In ancient times, the Blackfeet, who lived on the plains east of the Swan Range, and Flathead tribe, on the west side, engaged in frequent territorial conflicts. The Flathead crossed the mountains to hunt buffalo on the plains and the Blackfeet traveled to the west side to steal the excellent horses raised there.

According to legend and lore, one tribe strategically positioned itself atop the sheer cliff and rolled boulders down on their opponents trapped in the narrow canyon, winning that battle.

The name is still appropriate. With every spring thaw, rock slides crash down on the two-lane highway or on the train tracks on the opposite side of the river.

Back to Bad Rock Books, which is not only a charming shop but also has a great backstory.

From 1997-2016, Carol Rocks ran Bad Rock Books as a one-woman show. Every morning, she ate breakfast at the Whistle Stop Café across Nucleus Avenue from the shop and struck up a friendship with Cindy Ritter, her favorite server. When health problems hit Carol, with true small-town community spirit, Cindy began helping out at the bookstore. As Carol’s health worsened, soon Cindy was running the business full-time.

When Carol passed, Cindy was stunned to learn Carol had left the store to her.

The neighbor-helping-neighbor spirit doesn’t end there. One cat, Bailey, came with the shop. When Cindy took Bailey to Dr. Lawson, the veterinarian down the street, he told her about a sweet cat that had been abandoned and asked if Cindy would adopt her. To close the deal, he threw in free vet care. The new cat was dubbed: “Miss Poe”. 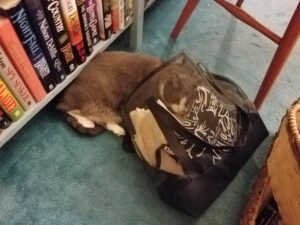 A recent addition is Sweet Pete, another rescue from Dr. Lawson’s clinic. Bailey makes sure that Sweet Pete knows he has to work his way up to a management position.

Locals and tourists alike browse the shelves for new and used books from every possible genre. One corner is filled with boxes of children’s books on the floor. Cindy explains she initially thought those books should be shelved. Then she discovered, “Kids prefer to sit on the floor and dig through boxes like a treasure hunt.”

Cindy says one of her favorite perks is to see readers discover a special book. “Whether it’s fiction, local history, or plant identification, I like to watch how people light up and expand when they find a book that opens doors to a new interest for them.”

The inventory of 20,000 books is attractively displayed and well-organized. Cindy is also an enthusiastic booster of local authors. She prominently features their books and graciously hosts gatherings and signings. 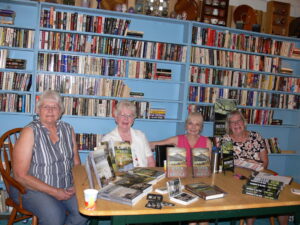 Her great attitude is the reason Bad Rock Books is one of my favorite bookstores.

TKZers: What are the best qualities of your favorite local bookstore?