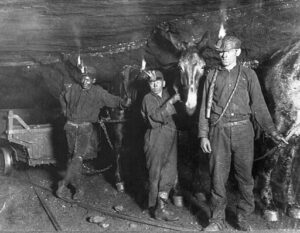 The Boys in the Basement

We’re writers. We know what that means. We’re always on the job. Our minds, often apart from our intentions, keep the story wheels churning.

Like when we go to comfort a loved one in a time of need. We take their hand and issue words of consolation, while our writer mind is thinking, This would make a great scene. I wonder how I can work it into a book?

Nothing to apologize for. It’s how we roll. We write even when we’re not at the keyboard. So why not be intentional about it? Here are some of the methods I use to incentivize the Boys in the Basement:

We all know about brainstorming. That’s where we let the mind run free, without judgment, generating as many ideas as possible. The best way to get good ideas is to get lots and lots of them and only later cast aside the least promising ones.

I have found that a great aid to brainstorming is the mind map. Mapping is a way to visually link the random thoughts you jot down into some level of coherence. (A good book on this process is Writing the Natural Way by Gabriele Lusser Rico.)

I use mind maps in two ways. First is to get ideas for flash fiction and short stories for my Patreon community. I often use a nifty set of cards called The Storymatic. Their ad line is “Six trillion stories in one little box. Which one will you tell?” It’s a set of 500 cards of two types. One type is a setting or situation, the other is a kind of character. I’ll draw one of each at random and put them together to see what comes up.

The other day I drew the cards “Survivor” and “Message in chalk on sidewalk.” I wrote those down on opposite sides of a page and circled them. Then I began the map. Here’s what it looked like (click to enlarge): 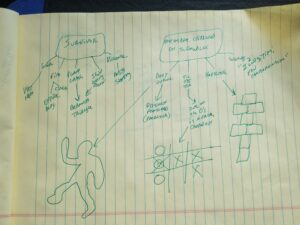 As I went along I kept coming back to the doodle of the chalk drawing. The Boys were trying to tell me something. I listened, and an idea for a short story popped up. As I pondered a little more I dropped the Survivor part altogether (you’re not wedded to anything when you mind map) and in a few minutes had the complete concept.

The other way I map is when I have a particular plot problem to work out. I’m finishing up a novelette in my Bill Armbrewster series about a Hollywood studio troubleshooter in the 1940s. As I closed in on the ending I realized there was a key element earlier in the story that needed clearing up. It involved the filching of a photo from a movie star’s dressing room (Bette Davis’s, to be exact.) So on paper I wrote “Who stole the pic?” and started mapping. In a few minutes I had my answer. 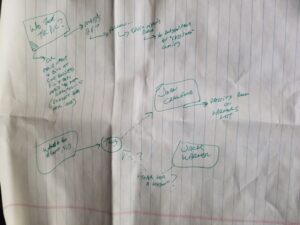 I know some writers who want silence as they type. But for creativity there is research that suggests a little ambient noise helps. When I’m in my office I usually put on Coffitivity or New York street sound.

Often I’ll do my mind mapping while listening to music. If I’m thinking of suspense—which is most of the time—I’ll put on a playlist of suspense movie soundtracks (my favorite being the Hitchcock scores of Bernard Herrmann). I have other lists of soundtracks that stir up other emotions.

I don’t usually use music with lyrics for this, but I understand a certain Mr. King used to crank up the rock for his work. So I’ll make occasional use of the greatest rock era of all time—the 1970s (go ahead, try to prove me wrong).

Nice thing about the Boys is that they don’t take time off. So give them direction at night.

If you’re working on a novel, spend five concentrated minutes just before shut eye thinking about the plot, characters, or a scene.

Sometimes I’ll write a problem down on a pad on my bedside table. What is Romeo going to do about the bomb?

In the morning, as soon as possible, write down whatever is bubbling in your head, even if it doesn’t make sense at first. Somewhere in there is a message to you, though it may be in code!

I wonder if you’ve noticed a slight increase in stress levels these days.

We’ve all been there. We’ve all had days when we make the coffee nervous. As I pointed out in a previous post, all the mental effort that goes into navigating the mandate marshlands takes a toll on our creativity and writing energy.

Add to that the constant stream of vitriol spewing out of every communicative orifice in our civilized nation, and you’ve got a recipe for potential creative shutdown.

So what can you do? You can quiet your mind a couple of times a day. A popular practice for this is mindfulness.

Mindfulness isn’t some mystic practice that requires a robe and the lotus position. You won’t end up in a Tibetan monastery (unless you really want to). It’s just a way to practice calming down. In old movies the usual step was some guy saying, “I need a drink.” Many follow that path even now. Better is 10-15 minutes of mindfulness. Plus, instead of a hangover, you’ll get a burst of creativity afterward. Four ways I’ve done it:

Sitting: Sit in a comfortable spot, with your back straight (not leaning against the backrest). Feet flat on the floor, hands resting on your legs. Breathe easily in through your nose and out through your mouth. Listen to your breathing. Note the way your abdomen and chest move. Find an object in the room to concentrate on. Look at it, noting everything about it. Don’t analyze it, just look at it. It’ll be hard to do this at first. Your thoughts will easily distract you (“I have to remember to go to the store…Where did I leave my reading glasses?…Did The Rock really make another movie?”). When that happens, recognize you’ve had the thoughts and gently return to breathing and concentrating.

Walking: Don’t mistake this for taking a walk for exercise. Instead, you only need a small space outside. I walk around my pool. Do it slowly, nose-mouth breathing, noticing whatever is around you.

Driving: (Especially helpful in L.A. traffic.) Instead of grumbling about being late, breathe easy and focus on the taillights in front of you. Notice their design and texture. Make sure you’ve turned off talk radio and the news. Ignore bumper stickers.

Waiting in Line: Instead of grousing how long your line is—or how all the other lines seem to move faster—be grateful for the opportunity to have some quiet time. Don’t pick up a People magazine to see if Kim and Kanye are getting back together. Just breathe easily and note all the colors you see in the objects around you.

These are some of the ways I write when I’m not writing. What have you noticed about your own time away from the keyboard? When do ideas tend to pop up from the basement? Do you do anything to incentivize the Boys?