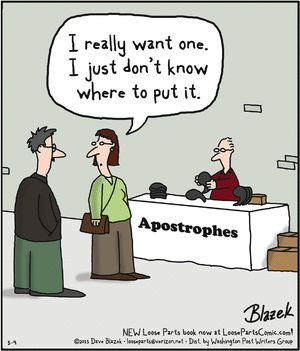 A pet peeve of mine is incorrect apostrophe usage, something I see all the time while driving around, or scrolling the internet. I’m sure everyone here at TKZ is well aware of the rules, but just in case someone needs a refresher course, I thought I’d mention it. If you’re starting out, or get confused, I hope this helps.

Use 1. It shows possession. Something belongs to someone or something.

The man’s hat. The dog’s leash. My biggest trouble-spot with this is dealing with plurals. There’s a difference (as my crit partner loves to point out) between the Detective’s office and the Detectives’ office. But then, I can never remember if I’ve given each of my detectives his own office.

I also have to stop and think about housing. You know, like when you go to the house that belongs to Mr. and Mrs. Smith. Since it belongs to both of them, it’s the Smiths’ house, not the Smith’s house. Our neighbors across the street have a lovely carved sign that says “The Cochran’s.” I cringe every time I walk by.

Words that already end in “s” can be a problem. I go out of my way to avoid naming characters with names ending in “s” to bypass the head-scratching. And here, I’ve seen it both ways. In my first book, my editor, whom I fear was overworked, didn’t catch that I’d written both Doris’ and Doris’s throughout the manuscript. Luckily, I noticed it in edits. She really didn’t care which one I used as long as they were all the same. My inclination is to leave off the final ‘s’ after the apostrophe simply because it looks cumbersome and when I read it “aloud in my head” I keep added “s” sounds.

Okay, that’s one use of the apostrophe. The other:

Use 2. Replaces other stuff. 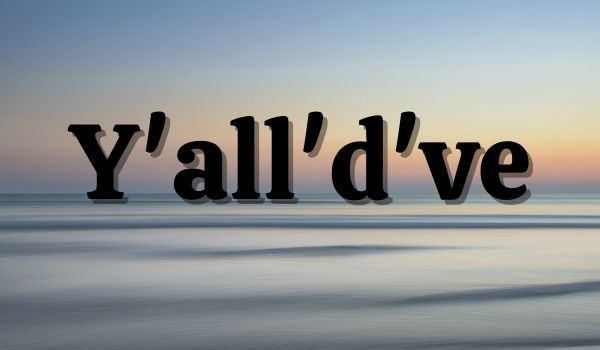 Apostrophes are used in contractions to show you’ve combined two words and taken away some of the letters.

I taught apostrophes when I was tutoring in adult literacy. It was very common for students to see the word don’t and read it aloud as do not. They knew what the apostrophe meant even if they couldn’t use one when writing.

Use 3. THERE IS NO USE THREE

You CANNOT use an apostrophe to create a plural. 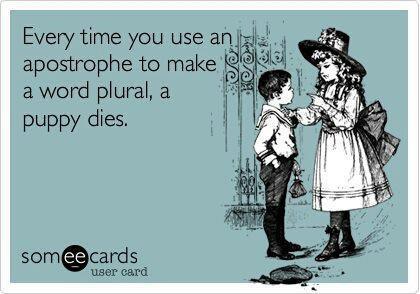 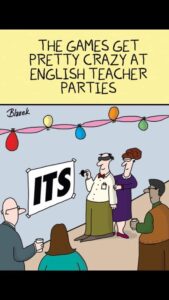 A major hangup for people seems to be with its and it’s. I know it’s very easy to have the fingers outpace the brain, and first-draft typos are common, but if you remember it’s = it is, you’ll be fine. The apostrophe stands for a missing letter.

Which means its is possessive, which is the exception to Rule 1.  The tree lost its leaves. The leaves belonged to the tree.

The only other ‘exception’ I can think of is one I discussed with my editor (not the one who missed my Doris inconsistencies). My characters can mind their Ps and Qs. But when it comes to dotting I’s , she prefers the apostrophe because it avoids the confusion with the word Is. And, for consistency, she included the apostrophe with crossing T’s. So, it’s dotting I’s and crossing T’s. The caps, I think, are a matter of preference.

One more hint, related to formatting:

There’s a difference between an apostrophe and a single quotation mark. Trust me.

If you’re using Word, when you want to start a word with an apostrophe because it’s a contraction, abbreviation, as when you’re using dialect, Word assumes that you want a single quote there, because that’s how the program works.

Thus, if your character uses em for them you’re going to get ‘em. What you want is ’em. There are codes, or keystrokes for getting that apostrophe instead of the single quote, but I’m lazy and forgetful, so I just copy an apostrophe from another word and paste it where it needs to be.

To find them, you can search on a space before a single quote/apostrophe, and that should bring them up.

I’m sure you have some apostrophe observations to share. The floor is yours. 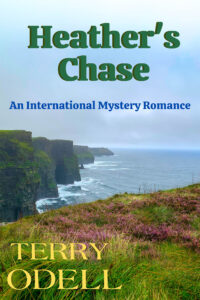