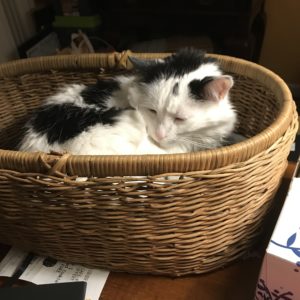 I’m shy/not shy about discussing my writing “process.” I actually dislike the word “process” when it comes to writing because it makes writing sound both vaunted and ridiculously precious at the same time.

I’m often shy sharing mine here because the posts on TKZ are created by professional, grown-up writers. Most have regimented schedules, produce work, reward themselves, and move onto the next project. They support families and/or themselves. Writing is a job. They also have other jobs, whether they be at home, or working outside the home. They blow me away every day with their dedication, creativity, and professionalism.

Weirdly, I’m also a professional, grown up writer. Though I’m a professional writer who has resisted schedules all her life. The ADHD is an issue. My brain can truly hyper-focus, but when it’s not hyper-focusing, it’s constantly on fire. It can’t be still at all. It constantly searches for novelty and stimulation. ADHD meds clamp down my creativity like an empty yogurt carton trapping a spider in the front hallway. Oh, and the yogurt carton has the Complete Works of Shakespeare on top of it. No more web-spinning, fly-sucking, or terrorizing the kiddies for that spider! (Hmmm. That about describes my creativity, though I’ve never actually drained a fly. I found myself weirdly desirous of eating a dead one once–but that’s another blog.)

Every so often, I dive into schedules and calendars and self-help books and organization projects. They delight me! The future immediately looks so bright! I love the idea of not writing at two in the morning because I couldn’t settle down all day to the work. (I don’t enjoy overnight writing, but I often do it out of necessity.) Schedules discourage writing right up to deadline. What a brilliant concept.  I’ve actually done it a few times and it was AMAZING. Like Graeter’s Ice Cream amazing. First kiss amazing. (Actually, my first kiss was kind of awful. But that’s also another blog. Or not.) Finding six Hershey’s kisses from last Christmas at the back of the cabinet when you’ve been out of chocolate for an entire day amazing. Dang, that’s a great feeling, isn’t it?

I’ve been in next-book mode for months and have restarted it three times. We’re talking between 30 and 50 pages started. I just couldn’t figure out WHERE the book needed to start because it’s a story with a higher number than my usual amount of turning points. (Hey, I used one of those professional writer terms here. Woot.) This is a big book, a big story. It’s opened in different time periods and with different characters. Also different POVs. Many (more sensible) writers would’ve moved on to another idea by now. Another writer might have been at their desk daily at 8:30 a.m. and gone through the three restarts in a few weeks.

But I still hunger for the right schedule. The right way to work. The right amount of finished pieces. I still imagine there’s a Platonic Ideal of Laura’s Writing Career out there.

Perfectibility is the eternal illusion. A quest at least as old as the first cave artist who sketched an Ibex that came out looking like a prairie dog, scraped it off and tried again. And again. Funny how we look at so many of those cave paintings now and think them wondrous. Are they perfect? Who’s to say? By what standards can we judge ancient art? We can classify it. Trace developments over time by looking at similar work. Say one artist’s work is somehow better than another. But each effort stands alone. Human creations are imperfectible, just like humans. (My opinion, y’all. I’m not itching to argue religion or philosophy here…) Here’s the cool thing I’ve discovered about the desire for perfection, though: It keeps me striving. As long as I don’t constantly kick myself for not ever being perfect, I still get plenty of satisfaction.

I will probably die with the notion of the Platonic Ideal of Laura’s Writing Career in my head. Oh, well. It’s definitely far less difficult to live with than it used to be.

Every time I post on Facebook these days, I get some stupid message about how people really respond better to posts with pictures. “Posts with pictures are more popular than posts without pictures, Laura Benedict. Why don’t you include some pictures in this post? And, by the way, you can go ahead and add your photos to this post, and we will automatically remove any preview links you’ve already included in the post, thus completely destroying it. You may then add pictures to your new post.”

So I’m going to add some pictures here. This is what my life has been like over the past five days in which I was hyper-focusing on the third start on this novel. I’m pretty sure I got it almost right this time, in the tradition of horseshoes and hand grenades.

They’re not lovely pictures. But in my life, creation is messy, and occasionally people have to make their own dinner.

After the photos:  Tell us about your process. Or your quest for perfection. Or creativity/work habits that really work for you. We are always open to new ideas here! 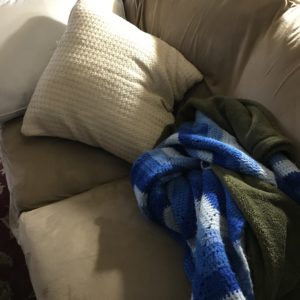 Where I slept last night because it’s not fair to disturb a sleeping husband at 5:00 a.m. when he usually gets up at six. 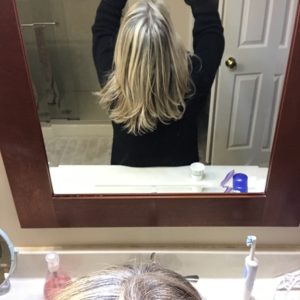 Trust me. You don’t want to see the front. 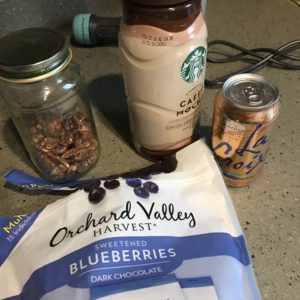 Sustenance. All the food groups. Plus, I roasted those pecans on Sunday. No one can say I didn’t cook. 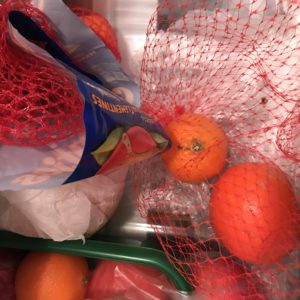 I think a dozen clementines, two apples, and a 1/2 grapefruit count as nutrition, yes? 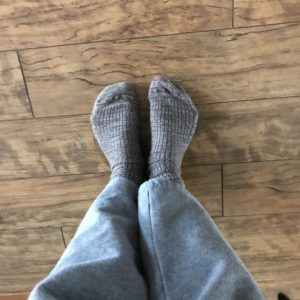 Uniform. Or as I like to call them, Second Jammies. 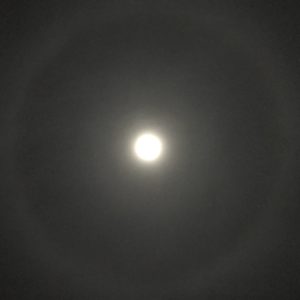 Bonus: Sometimes if you take the dog out to pee at 1:30 in the morning, there’s a ring around the moon. 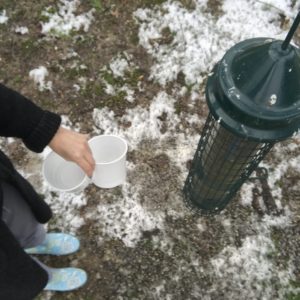 Husbands can feed themselves. Birds can too. But I can’t convince Husband to go out and hop around the pole to entertain me when I look out the window as I write.

If bet if we all had put aside a quarter for each time we heard someone say, “I’d write if I only had the time,” we could take the entire TKZ crew to Bali for a week, and bring along most of you, dear readers.

People say, “I don’t have time,” as though time were a finite thing, and not an infinite stream of possibilities. Does the idea of time as an infinite stream sound derpy and pie in the sky? Well, okay. Maybe it’s a little derpy. But it’s also true. (Oh, and yes, of course we will all die, but this fact will only serve to support what I want to say today.)

I don’t have time to write, and never have. There are eight million things in my ADHD head, all clamoring for attention. I suck at prioritizing because everything appears to be equally important. So other people set deadlines and I end up juggling them: tax deadlines, teaching deadlines, promotion gigs, car repair, pet and child maintenance. The family likes to be fed, bills have to be paid. And on, and on. It’s easy to feel like I have no time for anything I want to do.

If you don’t set your own priorities, other people will set them for you.

Being a writer is a choice. There are some writers who decide very early that their writing will be the primary focus in their lives, and every choice they make follows from that. What if you did that? What if you made writing your number one priority? What would that look like for you? Maybe it sounds pleasurable to you, maybe not. But many who’ve done that have found enormous success because they followed that narrow path. Those folks are people who, after a few years, don’t ever think twice about what comes first in their lives.

Or maybe that sounds a little freakish to you. Most of us have rather more prosaic needs. We like to have families or lots of friends. Quality of life is important. Or earlier choices we made preclude us from living like a Monk Servant of the Word.

Our writing choices are necessarily different:

We can cook a gourmet dinner, or we can heat up a can of chili and spend the extra forty-five minutes writing. We can binge-watch The Avengers or Stranger Things or The Great British Baking Show, or we can watch one episode and write for two hours. We can sleep eight hours, or sleep seven hours and stay up late to write in that sleepy zone in which weird, dreamlike ideas punch their way through our consciousness. We can take an actual lunch hour at the office, close our door, eat a protein bar, read for half an hour and write for half an hour. We can let the grass get a little too long and admire the words we wrote instead of worrying what the neighbors will think.

We can choose from a hundred different ways to nurture our creativity, even at random times. But if you’re hanging out here, words must be your poison.

Did I say poison? I did. Maybe that’s some kind of Freudian slip. It has occasionally felt like a kind of poison. For a long time I approached writing with a sense of dread, with a sense that I was doing something VERY SIGNIFICANT. Who in the heck is going to want to make time for something dreadful? One of my favorite synonyms for dreadful is formidable. If you’re thinking that what you will write if you take the time to sit down to write must be formidable, that’s a heck of a lot of pressure to put on both you and your work.

If you’re approaching your work this way, I encourage you to lighten up this very minute.

When we’re writing, what we’re doing is not so formidable that we can’t do it in a notebook when we’re waiting in the doctor’s office. It’s not so important that we can’t jot down the outline of a scene while there are five minutes of commercials of people wearing Ralph Lauren fancy pants while they’re dancing on a glorified party barge as it floats down the Rhine. Is our writing too formidable to be present while we wait for an oil change?

Don’t make your writing an idol. Writing is not special. Writing is telling stories. Yes, there will be times when you need a chunk out of the time stream to organize chapters or write a difficult scene. But you will never have the perfect time to write. There’s no such thing.

So plunge into the stream and swim while you can.