Last Friday we shared some pix of where the TKZ bloggers write. This week, it’s your turn. A number of readers responded to our request with some great photos of their writing spaces. Here we go! 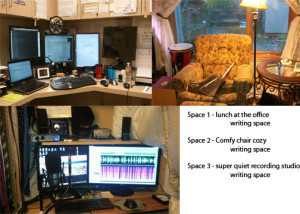 Basil is a self-described “on the go, write-where-you-can” kind of guy.

“I have three primary butt parking spots where my literary juices tend to spike highest,” he says. 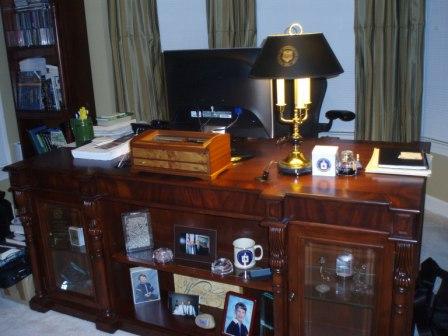 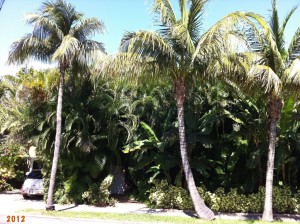 OK, forget the office–just look at Mike Dennis’s place (I think it’s hidden behind the palm trees). It must be great to work in paradise!

And here’s his office… 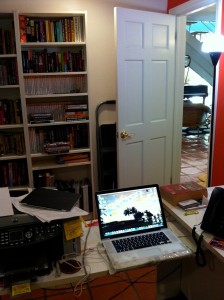 Mike Jecks:
Mike from the UK accused us of cleaning up our desks for our photos last week. Guilty as charged, Mike! He included a photo of his office and canine muses. 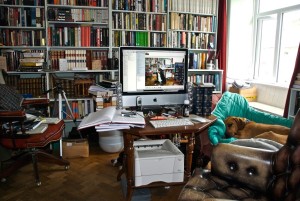 “As you can see, British writers don’t tidy up the desk before wandering off to pointlessly take photos, even leaving both dogs in the shot to prove we’re not idly ambling around the lanes instead of working,” he said, with lovable British sarcasm. “No. We’re sitting indoors pretending to concentrate on the next book, while actually taking photos of the ‘workspace’ instead. Work displacement activities are a wonderful thing! Hope you like the way I took one photo, didn’t like it, so took a second while leaving the first on the screen … yeah, I forgot.”

Oh, and the second dog? If you look under the desk, you’ll spot a nose. 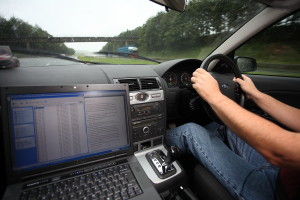 Zoe gets her creative juices flowing in an unlikely spot–her car.

“I get a lot of productive work done in the car on motorway journeys,” she says.

Seriously, Zoe? Be careful doing that in Southern California–they hand out tickets here for texting and using a cell phone, much less tapping out the Next Great American Novel! 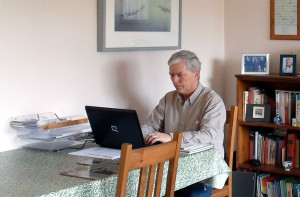 Michael is shown working in his office.


“This is me, our dining table and, yes, that is my permanent ‘office.’  It is where I work when I am not writing on the bus or a train,” he says.


I’m a dining room table writer too, Michael. Thanks for sharing! 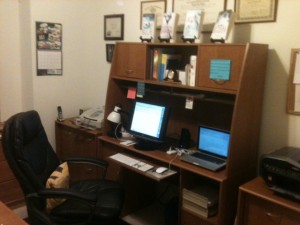 Richard Mabry sent us a photo of his office from his iPhone. Very cool! 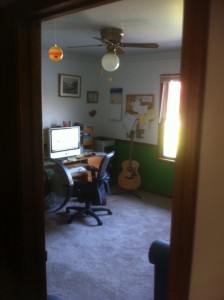 “My office used to be in the basement… and my youngest son wanted to move down there so I switched with him,” Mark says. “I rather liked the solar system hanging from the ceiling, so I left it up.”

The acoustic guitar provides an additional outlet for creative expression.


Terri Coop:
Terri describes her office as “very much my cocoon.” 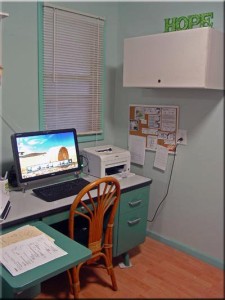 “This is my little corner of the world where I write and run my business,” she says. “It is in a free-standing apartment built inside my warehouse. I rescued the desks and wall mount cabinets from the alley behind an insurance agency (there is another on just like it to the left holding all my graphic design printers). Then I decorated the office around the desks.”

I love the HOPE sign on top of the cabinet. Every writer needs one of these!

Thank you!
Sending out a big thanks to everyone who shared their pictures and stories about their writing spots this week. Hope we didn’t overlook anyone. Please share your story today in the Comments!