I visited one of our local Barnes & Noble superstores — one of those two story freestanding buildings that one can get lost in for hours — and was on the receiving end of a mental gut punch. A good portion of the second floor which had formerly been set aside for fiction has been given over to the expanded children’s section. I don’t have anything against children’s books, mind you; if young ones don’t love reading early it’s doubtful they’ll develop even a deep fond for it later — but a lot of what I saw consisted of book-related merchandise (stuffed animals and the like) as opposed to books. What caused the sinking feeling in the pit of my stomach (and yes, there’s quite a distance to be traversed before one reaches my pit) was that I recalled a very similar occurrence several years before. There was a popular chain store named Media Play that I used to frequent. I walked into one about a year after digital downloading of music became popular, and found that their music CD section was reduced by forty percent. Media Play, by the way, is no longer in business.

What you will find at Barnes & Noble: signs everywhere you look for the Nook (you might say they‘re in every cranny). And the Nook will be available at your local Wal-Mart beginning Monday October 25. You’ll be able to find the Kobo there as well, along with the Sony e-book Reader and something called the iPad. The battle has been joined.

***
Here’s an idea for you: renting e-books. If you can’t afford Ken Follett’s latest book, even as an e-book, rent it for two bucks for two weeks. Pay two bucks, download a DRM-protected file to your Kindle (or Sony Reader, or Nook, or iPad) and read it. It disappears after two weeks. The provider gets a cut and — yes! — the author and the publisher (if there is one) get royalties as well every time a book is downloaded. Under the traditional library model, nobody gets anything when a book is borrowed from the library. I remember a few years ago when I went to borrow a book about a Da Vinci code or something or other and was on a waiting list behind 288 people. If you don’t want to wait to read it, then for a couple of bucks you won’t have to. Reader’s groups would love this. You wouldn’t need a public, tax-supported entity to sustain it, either. I don’t see libraries loving this idea (or jumping on it (some libraries offer audio book and e-book downloads, but the selection is paltry) but its meant as an alternative, not a substitute, to libraries. And suppose you really like the book, and want to keep it? Your rental fee could count, in full or in part, toward the purchase price.
***

. It’s devoted to mystery and crime fiction. Worth a look and a read. Repeatedly.

And speaking of reading: I’m juggling two books. One is NASHVILLE CHROME by Rick Bass, a fictional treatment of the history of country music’s Brown Family. It’s a wonderfully told cautionary tale about the downside of getting what you wish for. The other is BOOK OF SHADOWS by Alexandra Sokoloff, a beautifully dark tale by one of my favorite authors and people. 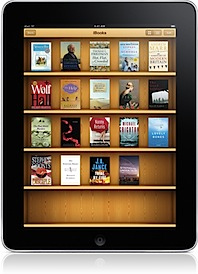 I’ll start by saying that I don’t completely understand the Apple mystique, in fact I’m a little perplexed by their cult following. I appreciate my iPod and iPhone as much as the next person (although AT&T easily takes the prize for the worst network). But in my experience, some of the Apple products leave much to be desired. My husband finally convinced me to switch from a PC to a Mac last year–which has absolutely been a mixed bag. Some of the programs, like iPhoto and Scrivener, I love. Yet I can’t fathom why there isn’t a blogging program for Macs that holds a candle to Live Writer. On the plus side: fewer viruses and crashes. But I sorely miss Microsoft Outlook.

So with all the hoopla surrounding the release of the iPad, I was skeptical. It looked big, for one thing. What I like about the Kindle and the Sony Reader is that they manage to mimic the experience of reading a book. You open something, hold it in both hands. In comparison the iPad appears unwieldy, roughly the size of a dinner plate. I couldn’t imagine holding this big flat thing and reading off it.

But then a friend brought one over for me to test drive. Wow. It has all the features of the Kindle, Nook, and Sony Reader. It’s light and comfortable to hold. The pages actually appear to turn, which is a neat trick. And that’s just the beginning.

There’s been a lot of chatter about eBooks and what they mean for the industry. Most of the debate has centered around issues like the recent Amazon/Macmillan pricing standoff, and what kind of ebook rights authors should be getting. There are those who claim that within a decade print books will be a rarity, limited editions published exclusively for collectors. Others say that’s an exaggeration, books are here to stay.

What’s been lost in the debate (because until now it was largely irrelevant) was how books and the entire reading experience could change. The Kindle and the Sony Reader were great, but they basically just enabled a reader to experience a book the same way they always had. The main benefit was that the font size could be adjusted, and the reader could hold a full library. Neither offered true interactivity, a bridge between books and other media.

That bridge is exactly what the iPad provides.

Check out this video of the iPad version of Alice in Wonderland (but be forewarned, it’s a little frenetic. I’d advise against clicking on the link if you’re prone to seizures).

Wow. Seeing that, I finally grasped the iPad’s potential. For one thing, it could revolutionize children’s books (although I’m hard pressed to name a parent who would hand a relatively fragile $500 device over to their child). And for graphic novels, this is a complete game changer.

On my book tour for THE GATEKEEPER, I assembled a PowerPoint display of real-life settings from the book and other materials to provide a frame of reference for readers. Just imagine if that information could actually be incorporated into the text itself.

It reminded me of reading The Da Vinci Code while vacationing in Costa Rica. I found it maddening that when so much of the plot was focused on specific paintings and statues, there were no images included in the text. With the iPad, a book could include those, plus links to video interviews with the author, related sources- really, the sky is the limit.

I’ll save a discussion of other iPad features for another day, including apps (movies look amazing on it, though, in case you’re curious). But I have to say, I’m a convert. I’ll probably wait for the inevitable price drop. When that comes, (and I suspect we’ll be seeing a huge decline in prices for eReaders across the board soon), Apple could corner the publishing market the same way that they basically appropriated the music industry. And along the way, they might end up changing what constitutes a book.