*Our website is having problems this morning, not allowing comments. Please check back later to see if the problem has been resolved. Sorry for the inconvenience, and thanks for stopping by. 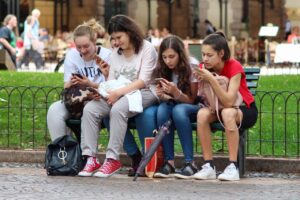 I chose the topic of serialized fiction – a look back and a look forward – for today’s discussion, because Kindle has recently announced that it is entering the market. Vella is the name of Kindle’s new platform for serialized fiction. Let’s look at it, as well as some other sites, and then discuss reasons for considering serialization, and some creative ways to do so.

First of all, what is serialized fiction? The Free Dictionary defines it as “a novel, play, etc, presented in separate installments at regular intervals.” Wikipedia states, “In literature, a serial is a printing format by which a single larger work, often a work of narrative fiction, is published in smaller, sequential installments.”

The history is interesting, with serialization being around for several hundred years, since the development of movable type. Early authors who used it successfully include Charles Dickens, Wilkie Collins, and Sir Arthur Conan Doyle.

Here is a list of  sites offering writers the opportunity to serialize their fiction:

Vella: Kindle Direct Publishing announced in April the launch of Vella and gave a brief description. Basically, writers (currently available to U.S. writers only) will use Kindle Direct Publishing as they already have, and where they can write or upload their stories to Vella. (See the second article below for many of the details.) It is available to writers now. Readers can access stories in the next couple months.

Readers will access Vella on their phones on the Kindle Vella app for iOS or Android, or on the Kindle Vella website on desktop. Readers can read the first three episodes for free. After that they will buy tokens to unlock additional episodes. Episodes can range from 600 to 5000 words, and the price will vary according to length of the episode.

Tokens can be purchased in larger quantities, decreasing their price, and decreasing writers’ royalties. And Kindle plans to sell the tokens through other channels, which will take a 30% cut, meaning the writer will earn 15% less

Here are links to articles with more detail:

Potential benefits include higher earnings than with Kindle Unlimited (time will tell), and the possibility of reaching a younger market (teens) who often don’t own a Kindle and read on their phones. Longer works would pay better, because the first three free episodes would be a smaller percentage of the whole. And the cost of cover art could be significantly less, with nothing more than an image required. (No text.)

Caveats from experienced writers include the fact that payment from Kindle has changed in the past, and apparently token prices have already been discounted in certain situations (benefiting Kindle, but decreasing royalties for writers).

Now to other sites. And here’s a link to a more detailed article:

Royal Road: mostly Litrpg and Sci-Fi. No system for monetizing the stories. Stories must be approved to be published.

Webnovel: Big site. Most popular genres are translations from Chinese romance novels. Writers are contracted to provide a minimum word count per month in order to get paid.

Tapas: Good interface. Oriented toward comics. After getting 25 subscribers, writers can ask for donations to unlock the rest of the chapters.

Cons: More for comics. Getting featured is out of writer’s control.

Moonquill: new as of 5/19. Can monetize your work from get go with an ad system.

Pros: Good interface. Monetization system, but it had not been implemented as of 5/19.

Wattpad: The biggest site. It has launched careers for some writers. Requires constant interaction with readers. Writers are using it to attract readers to their subsequent novels. Difficult to navigate. No monetization.

Medium: Have to subscribe to read. Have a paid partnership program. Not a lot of serialized fiction.

Pros: Good interface. Easy to publish. Has a monetization option.

Cons: Subscription program for readers. Payment only through Stripe.

Radish: Has had issues with censorship and removal of works. Payment issues. Can’t edit stories once they are published. Mostly romance.

Cons: Problems with transparency, payment, and removal of content.

Cons: Many people have advised against working with them. Require exclusivity. Concerns with payment after initial payment.

Patreon: JSB uses this site successfully for short stories. I asked him what he thought about using it for serialization. Here’s his answer: “Patreon isn’t a dedicated platform for short fiction. An author could certainly try to gain patrons for such a thing, as I have. But the lure of a Vella or a Radish is the potential to gain a huge following and, thus, some nice payouts.”

Reasons to consider serialization: Here’s one writer’s list of possible reasons (his opinions):

But other than that, most articles came down to the conclusion that serialization has more potential for exposure, less potential for making money. And one author added the caveat that it may require a lot of interaction with readers.

by James Scott Bell
@jamesscottbell
So you want to make money as a writer. I feel a Seinfeld coming on: Not that there’s anything wrong with that! Because there absolutely isn’t. In fact, it’s a good thing to write for money.
Writers write. And these days, writers increasingly publish. But digital and print are not the only games in town. To invigorate the flow of your income stream, think diversification.As in, trying new things, putting out your content in all possible forms. Here are two to consider: Audio and Serialization.
Audio
According to the Wall Street Journal (link may expire),there is an “explosion” in the production and consumption of audio books:
“We’re moving toward a media-agnostic consumer who doesn’t think of the difference between textual and visual and auditory experience,” says Don Katz, Audible’s founder and CEO. “It’s the story, and it is there for you in the way you want it.”
Audio books have ballooned into a $1.2 billion industry, up from $480 million in retail sales in 1997. Unit sales of downloaded audio books grew by nearly 30% in 2011 compared with 2010, according to the Audio Publishers Association. Now they can be downloaded onto smartphones with the tap of a finger, often for the price of an e-book.
This development is not without its critics and concerns:
The rapid rise of audio books has prompted some hand-wringing about how we consume literature. Print purists doubt that listening to a book while multitasking delivers the same experience as sitting down and silently reading. Scientific studies have repeatedly shown that for competent readers, there is virtually no difference between listening to a story and reading it. The format has little bearing on a reader’s ability to understand and remember a text. Some scholars argue that listening to a text might even improve understanding, especially for difficult works like Shakespeare, where a narrator’s interpretation of the text can help convey the meaning.
Despite the doubts, it’s clear that audio is not only here to stay, it’s going to keep on growing. Which means another income stream for authors.
If you are going it alone, writer, the path to a recorded version of your work couldn’t be simpler. The ACX program at Amazon has one of the most user-friendly sites in publishing. Go cruise around it and see for yourself. Start hereto get an overview of the program.
You have two basic choices. You can pay for equipment (or rent a studio) and figure out how to produce your own work. Or you can partner up with a narrator/producer and split the proceeds. That’s what I chose to do with a guy named Sands from Alaska. Together we have two audiobooks available:
Fiction Attack! Insider Secrets for Writing and Selling Your Novels & Stories
One More Lie
I’m currently auditioning female narrators for the audio version Pay Me in Flesh (Note: I retained those rights during contract negotiations. If you go traditional, discuss this with your agent). I’ll do the same with the other 8 books I have available with women as protagonists. For some of my other work, I’m planning to try it myself. I like listening to Stephen King narrate his own books, and I figure what’s good enough for him…
Serialization
Now we come to the serials idea, which is gaining momentum via Amazon. I recently interviewed thriller author Reece Hirsch, author of The Adversary (serialized via Amazon’s Thomas & Mercer imprint) about his new venture:
“I’m writing a series of thrillers for Thomas & Mercer, featuring Chris Bruen, a former Department of Justice cybercrimes prosecutor who is now in private practice helping clients combat hackers and cybercriminals. Each of the three books in the series will be published initially as Kindle Serials, which means that for a one-time price of $1.99, an episode will be automatically delivered to your Kindle each week for eight weeks. After the serialization is complete, the book will be available for order as a paperback and as a regular ebook. The book’s pricing is typically higher after the serialization period.”
In addition to the serialization, Amazon sets up a discussion board for each Serial so that readers can comment on the episodes as they’re released. “I intend to mix it up with