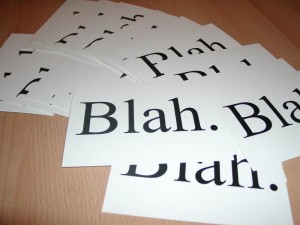 I recently read an excellent post by Rowena Cherry on some of the cardinal sins writers commit, and it really struck a chord, probably because in the past I’ve been guilty of most of them.

Now, what you can do…

And finally, remember that the most important thing is to achieve a balance. Don’t spend so much time discussing other people’s books that you neglect to work on your own.