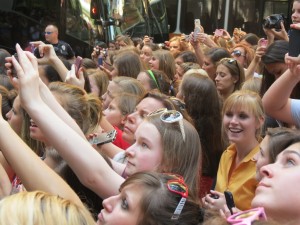 I’m still in the process of digesting Jordan Dane’s excellent tutorial on using Twitter as a publicity tool and raising one’s profile. I recently witnessed the end result of how all of this — Twitter and Tumblr and Facebook, oh my — works, and it was a sight to behold, believe me.
My daughter is a huge fan of the British boy band One Direction. If you are older than fifteen, you may not have heard of them, but the band is huge: they sold out their 2012 tour in around an hour, and they weren’t playing coffeehouses venues, nor were the ticket prices of the “one dollar and a can of food” variety, either. 1D, as they are affectionately known to their fans, skipped Columbus, Ohio this year (they’ll visit during their 2013 tour, which, btw, is also sold out) so we obtained tickets to the Charlotte, NC performance and tacked it on to the back end of a family vacation. The Family Hartlaub stayed at a Hyatt next to the venue, so that daughter and mom could easily walk to the concert without the assistance of their slovenly father and husband. I also thought that there was a chance that the band might obtain lodging at the same hotel; alas, such was not to be. But, but.
On the afternoon before the evening’s performance someone posted a photo at Tumblr and Twitter purporting to show one of the 1D lads in the lobby of a Charlotte hotel with yellow walls. I started googling and was able to narrow the locale down to four hotels in the immediate area, including the Charlotte Omni, just up the street. We headed out about 3:00 PM and started walking up the street when two jet black buses pulled up in front of the Omni. My daughter yelled, “IT’S THEIR TOUR BUS!” and went running up the street, tweeting madly as she ran. In seconds, and I mean seconds, what had been a quiet and relatively deserted intersection in uptown Charlotte became a mob scene of screaming teenage girls. It was as if someone had dropped sugar on a sidewalk in the summer: every ant in the vicinity immediately gets the message. I know, I know, John Gilstrap gets that reaction everywhere he goes, but still. It was unreal, and all because my daughter, and no doubt, a few others, sent the word out to all of their sister fans that 1D was in the Omni and would be exiting shortly. They eventually did, and it was tumultuous.
But wait, there’s more. My daughter posted one of the two thousand or so pictures which she took during the 1D concert and posted it to her Tumblr account. Someone blogged about it, and someone else tweeted about it, and by day’s end her picture had five thousand hits. The count has been increasing exponentially since then.
Your results may vary. I would love to see an author (in addition to the aforementioned John Gilstrap) get such a result from their fan base (“Jordan D. just wlked out 2 get hr mail! LOL!”). We don’t live in a world where authors are subjected to that sort of mob adulation for the most part, and more is the pity; but in these days where more and more authors are going it alone, it is certainly an effective way to get the word out about anything.  I’m going to spend the rest of this weekend working my way through Jordan’s directions; if you’re at all interested in using this tweeting tool as a means of self-promotion, you will want to do the same.
A postscript to the trip: in the middle of all of the chaos outside of the Omni my wife found an sD data card on the sidewalk. I loaded it up, hoping for…well, never mind what I was hoping for. What it contained were what appear to be vacation photos of a trip to Mexico and involving two families. The pictures were taken in December 2011; the families look like they might be linked by two sisters; and I would love to get this card back to the rightful owner. I have already posted this on several sites designed for reuniting lost cameras and such with their owners, and thought I would try this as well. If you’re reading this, and you know of someone who has been on vacation six months ago or so and lost their photos of the trip, send them my way @josephhartlaub or josephhartlaubatgmaildotcom.  I might be able to make them happy.

My fourth book, KIDNAP & RANSOM, was released on November 1st. And unlike my last thriller, this time a real-life kidnapping sparked the initial idea for the stor 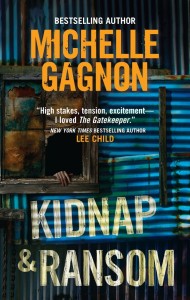 While researching border issues for THE GATEKEEPER in December of 2008, I stumbled across an article on the kidnapping of Felix Batista. Batista was a security consultant for ASI Global (if you saw the film PROOF OF LIFE, this was the same job held by Russell Crowe’s character).

Batista personally negotiated the release of more than a hundred hostages over the course of his career. That December he was in Saltillo, Mexico, offering advice on how to handle the uptick in abductions for ransom. While dining with local businessmen one evening, Batista excused himself from the table to take a phone call. On his way out of the restaurant to get better reception, he handed his companions his laptop and a list of phone numbers in case he didn’t return (this was a man who clearly knew you can never be too careful). Moments later, an SUV pulled to the curb and Batista was forced inside. 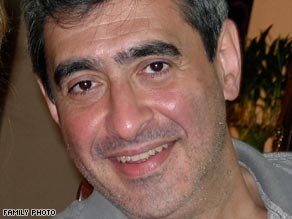 He hasn’t been seen or heard from since.

The irony of the story grabbed me—the hero becoming the victim, an expert suddenly forced into the position he’d saved so many people from. Stranger still, his kidnapping wasn’t proceeding normally—there was no ransom demand, and no one claimed responsibility for seizing him. It was a true mystery. (And over the next two years, kidnappings and cartel violence in Mexico became increasingly rampant, spilling over the border to such an extent that related articles appeared in the U.S. media nearly every day.)

So I set off to find out more about narcocartels south of the border, and about kidnappings in general. I fixed on Los Zetas, mainly because their backstory was fascinating. Los Zetas is a gang comprised mainly of former Mexican Army soldiers. They were part of an elite brigade, comparable to the Army Rangers, trained in special operations techniques by the best in the business at Fort Benning in Georgia. Upon returning to Mexico, they promptly left the Army and went to work for the Gulf Cartel. Eventually, they branched off on their own, wresting control of drug trafficking operations from rival cartels. In recent years Los Zetas have become increasingly involved in kidnapping 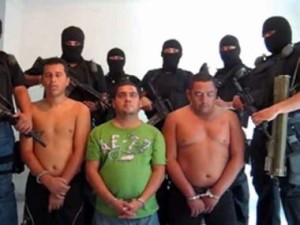 s, murder-for-hire, extortion, money laundering, human smuggling, and oil siphoning. They’re suspected of killing the 72 migrants found in a mass grave in Tamaulipas last August, and of the murder of American David Hartley on Falcon Lake last September. The DEA considers Los Zetas to be the most violent paramilitary enforcement group in Mexico.
So when it came to villains, the choice was easy.

Last May, I attended the wedding of a friend from Mexico City who had helped tremendously with my research. At the reception, I was seated with some of his relatives. When they found out that my latest novel was set in their hometown, they were enthusiastic…until they heard the title.

“Oh, no,” one uncle said. “You cannot write about that. Mexico City is very safe.”

“Really?” I asked (in all sincerity, might I add). “I heard that most locals know at least one person who has been kidnapped.”

“Well, of course,” they all agreed. Every single person at the table knew someone who had been kidnapped. But as they explained, it’s much worse up north by the border with Texas. There, it’s really a problem.

Mexico is rapidly supplanting Iraq and Colombia as the kidnapping capital of the world. In the past decade, drug cartels and terror groups have seized upon kidnappings as a relatively low-risk source of financing. During a recent election in Russia, one political party’s entire campaign was funded covertly by ransom money.

Many kidnapping victims are held for months, or years. Some continue to be held even though their ransom has been paid. Many never make it home again.
I dedicated KIDNAP & RANSOM to them, and to people like Felix Batista who devote their lives to freeing them.