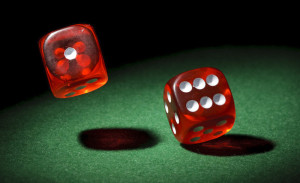 What is the role of luck in a writing career? The ever-understated Joe Konrath offered this thought recently: Maybe You Suck.

Some people don’t like me preaching on and on about how luck is possibly the single most important factor of success.

Some of these folks insist that good writing will always find an audience.

Some say those with success deserve it.

Some say my insistence that luck is important is a form of humble bragging, since I’ve sold a few million books.

Some don’t like the fact that luck is beyond their control, and they believe talent and hard work always win out.

Some think they make their own luck.

Have you reached the level of success you want? If so, and you don’t believe luck was involved, good for you. I suppose you can make a case for yourself, the same way every self-made millionaire makes a case when they write their inevitable “How I Did It” books. I don’t know how many people have read the Essays of Warren Buffet and then became billionaires, but perhaps a lot have. Maybe good, solid advice, a strong work ethic, and loads of talent, coupled with a how-to template, can make anyone a raging success.

But what if you aren’t a raging success, and you still don’t believe in luck?

Joe is not playing self-esteem mommy here. He’s more like R. Lee Ermey in Full Metal Jacket. “Maybe you’re incapable of putting out good books,” he says, “no matter how much time you spend at it.”

What are you going to do with a line like that?

You have two choices.

Just like the apple-cheeked marines under the unrelenting drill sergeant, you have two choices.

You can fold and quit.

Or you can get tough and keep going.

Now drop and give me twenty … pages.

If you’re a real writer, meaning someone who has to write, who desires to tell stories, who has an inner fire to put words down, you keep writing no matter what.

Which means you have to do something about your writing weaknesses.

But know this: All writers have weaknesses. It’s just that some are more apparent than others.

I once heard a professional golfer talking about the difference between the pros and skilled amateurs. He said professionals simply don’t make as many mistakes. Over time, their missed shots will be by smaller margins than the amateurs.

That’s a good analogy for the difference between writers who sell and those who do not (or not as much they would like). Even A-list writers make mistakes. But there are fewer of them, and not many are egregious.

So be honest about your weaknesses. Find people who will tell you what you need to work on.

You can hire an editor, or go to something like the Writer’s Digest 2d Draft service.

You can find some readers who will give you honest feedback.

Once you identify weak points, do something to improve them.

Write your quota and apply what you learn.

And while that still doesn’t guarantee any specific level of success, it does improve your odds. Which is what “luck” is really all about.

When I was a young and impetuous college roustabout, my roomies and I would take occasional trips to Vegas and, more recently, try out phone casinos. I learned the blackjack system in a famous book, Beat the Dealer. What that meant was I could get just about even with the house advantage. Which also meant, over time, I would do better than the hardware store owner from Tulsa who relied on pure luck when asking for a hit on a 10–7.

As you get better at the fundamentals of the craft, and as you produce more work, your odds will improve.

As one wag put it, “The harder I work, the luckier I get.”

But what if luck doesn’t happen the way you want it to?

I’ll tell you: It does not matter in the slightest to a real writer!

A real writer never gives up, because that’s the only sure way to lose.

Don’t let luck or fate or fear stop you from doing what you should do every day of your life: write!

(Okay, not every day. You get a pass for funerals, family crises, arrests, car crashes, food poisoning, driving from L.A. to Colorado, and Disneyland. Other than that, you write).

You don’t want to be sitting in a bar twenty years from now, hoisting your third brew, muttering to the stranger next to you, “Yeah, I used to be a writer. It’s a tough racket.”

You are a writer, so keep writing, keep growing, keep hammering away, and don’t spend one minute grousing about luck. 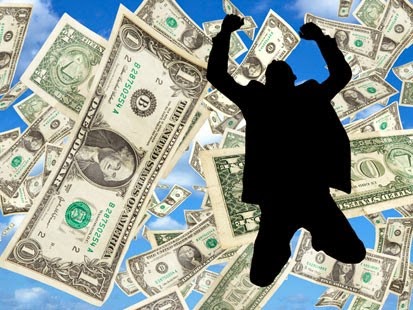 There’s been a lot of blogosphere chatter about writing success being like a lottery. Something about that metaphor has always bothered me. For in a true lottery you can’t really affect your odds (except by buying more tickets, of course). But is that true for writers?
I don’t think it is. Just putting more books out there (“buying more tickets”) won’t help your chances if the books don’t generate reader interest and loyalty. Productivity and prolificacy are certainly virtues, but to them must be added value.
Hugh Howey had some interesting thoughts recently on timing and luck. Citing Malcolm Gladwell’s book Outliers, Howey highlighted a fascinating factoid:
A list of the 75 wealthiest people in history, which goes all the way back to Cleopatra, shows that 20% were Americans born within 9 years of each other. Between 1831 to 1840, a group that includes Rockefeller, Carnegie, Armour, J.P. Morgan, George Pullman, Marshall Field, and Jay Gould were born. They all became fabulously wealthy in the United States in the 1860s and 1870s, just as the railroad and Wall Street and other industries were exploding.
From this Howey explains how he benefitted greatly from being in the right place at the right time, Kindle-wise. He had started writing in earnest in 2009, just as the neo-self-publishing movement was taking off. He did some things right, like early adoption of KDP Select and serialization. Look at him now.
But there is one thing he says I disagree with: “I know I’m not that good.”
Wrong. He is good. Very good. Woolwould not be what it is without the quality. Which Howey has worked hard to achieve.
Reminds me of the old adage, “Luck is where hard work meets opportunity.” I believe that wholeheartedly.
I went to school with a kid named Robin Yount. He was a natural athlete and an incredible Little League baseball player. In fact, my greatest athletic moment was the day Robin Yount intentionally walked me. Because Yount is now a member of Baseball’s Hall of Fame.
But it wasn’t just his natural giftedness that made him what he was. He happened to have an older brother named Larry, who made it to the big show as a pitcher. I remember riding my bike down to the Little League field one day and seeing Larry pitching ball after ball to his little brother. Robin Yount was lucky in the body and brother he was given. But he still had to work hard. Because he did,he was ready when, at age 18, he got the call from the Milwaukee Brewers.
Hard work meeting opportunity.
So I wouldn’t call the publishing biz a lottery system. What metaphor would I use? It hit me the other day: writing success is more like my favorite game, backgammon.
Backgammon, which has been around for 5,000 years, is brilliantly conceived. Dice are involved, so there’s always an 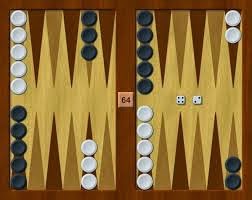 element of chance. Someone who is way behind still might win if the dice give him a roll he needs at a crucial moment.

On the other hand, someone who knows how to think strategically, can calculate odds, and takes risks at the right time, will win more often than the average player who depends mostly on the rolling bones.
Early on I studied the game by reading books. I memorized the best opening moves for each roll. I learned how to think about what’s called the “back game,” what the best “points” are to cover, and when it might pay off to leave a “blot.”
And I played a lot of games with friends and, later, on a computer. I discovered a couple of killer, though risky, opening moves. I use them because they can pay off big time, though when they don’t I find myself behind. But I’m willing to take these early chances because they are not foolhardy and I’m confident enough in my skills that I can still come back.
This, it seems to me, is more analogous to the writing life than a lottery. Yes, there is chance involved. I sold my first novel because I happened to be at a convention with an author I had met on the plane. This new acquaintance showed me around the floor, introduced me to people. One of them was a publisher he knew. That publisher just happened to be starting a new publishing house and was looking for material. I pitched him my book and he bought it a few weeks later.
Chance.
But I was also ready for that moment. I had been studying the craft diligently for several years and was committed to a weekly quota of words. I’d written several screenplays and at least one messy novel before completing the project I had with me at the convention.
Work.
Thus, as in backgammon, the greater your skill, the better your chances. The harder you work, the more skill you acquire. Sure, there are different talent levels, and that’s not something we have any control over.
But biology is not destiny, as they say. Unrewarded genius is almost a cliché. Someone with less talent who works hard often outperforms the gifted.
Now, that doesn’t mean you’ll always win big in any one game. If the dice are not your friends, things might not turn out as planned. That book you thought was a sure winner might sink. Or even stink.
But that doesn’t mean you have to stop playing.
Don’t ever worry about the dice. You cannot control them, not even if you shake them hard and shout, “Baby needs a new pair of shoes!” The vagaries of the book market are out of your hands. You can, however, control your work ethic and awareness of opportunity.
Writing success is therefore not a lottery. It’s a game.
Play intelligently, play a lot and try to have some fun, too.
So what about you? Do you believe in pure luck? Or do you believe there is something you can do to goose it?

Occasionally we’ll run a quote from a provocative post and ask you, dear readers, to respond to it. Today’s comes from author Lara Schiffbauer:

Start a conversation in the comments!