Full disclosure: I’m cheating again. I owe a book to my publisher on October 15, and it gets all my attention for a while. So, I decided I’d test everyone’s patience by recycling a post from January, 2017, in which I wrote about one of my favorite topics, which is things that go boom. I’m confident that the laws of physics and chemistry have not changed in the past five years, so the content should still be reliable. Here we go . . .

I’m going to continue my quest to help writers understand some of the technical aspects of weaponry so that their action scenes can be more realistic.  Today, we’re going to talk about some practical applications for high explosives.  It’s been a while since we last got into the weeds of things that go boom, so if you want a quick refresher, feel free to click here.  We’ll wait for you.

When I was a kid, the whole point of playing with cherry bombs and lady fingers and M80s was to make a big bang.  Or, maybe to launch a galvanized bucket into the air.  (By the way, if you’re ever tempted to light a cherry bomb and flush it down the toilet, be sure you’re at a friend’s house, not your own.  Just sayin’.  And you’re welcome.)  As I got older and more sophisticated in my knowledge of such things, I realized that while making craters for craters’ sake was deeply satisfying, the real-life application of explosives is more nuanced.

Since TKZ is about writing thrillers and suspense fiction, I’m going to limit what follows to explosives used as weapons–to kill people and break things.  Of course, there are many more constructive uses for highly energetic materials, and while the principles are universal, the applications are very different.

only 6-7 ounces of explosive (usually Composition B, or “Comp B”), they are designed to wreak havoc in relatively small spaces.  The M67 grenade that is commonly used by US forces has a fatality radius of 5 meters and an injury 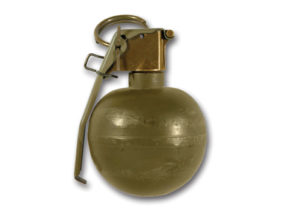 radius of 15 meters. Within those ranges, the primary mechanisms of injury are pressure and fragmentation.

For the most part, all hand grenades work on the same principles. By pulling the safety pin and releasing the striker lever (the “spoon”), the operator releases a striker–think of it as a firing pin–that strikes a percussion cap which ignites a pyrotechnic fuse that will burn for four or five seconds before it initiates the detonator and the grenade goes bang.  It’s important to note that once that spoon flies, there’s no going back.

Claymore mines operate on the same tactical principle as a shotgun, in the sense that

it is designed to send a massive jet of pellets downrange, to devastating effect.  Invented by a guy named Norman MacLeod, the mine is named after a Scottish sword used in Medieval times. Unlike the hand grenade, which sends its fragments out in all directions, the Claymore is directional by design.  (I’ve always been amused by the embossed letters on the front of every Claymore mine, which read, “front toward enemy.”  As Peter Venkman famously said while hunting ghosts, “Important safety tip. Thanks,Egon.”)

The guts of a Claymore consist of a 1.5-pound slab of C-4 explosive and about 700 3.2 millimeter steel 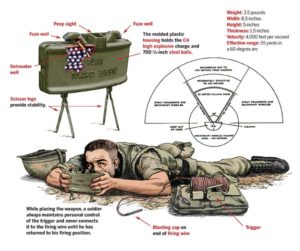 balls. When the mine is detonated by remote control, those steel balls launch downrange at over 3,900 feet per second in a 60-degree pattern that is six and a half feet tall and 55 yards wide at a spot that is 50 meters down range.

The fatality range of a Claymore mine is 50 meters, and the injury range is 100 meters.  (Note that because of the directional nature of the Claymore, we’re noting ranges, whereas with the omnidirectional hand grenade, we noted radii.)

Both the hand grenade and the Claymore mine are considered to be anti-personnel weapons.  While they’ll certainly leave an ugly dent in a car and would punch through the walls of standard construction, they would do little more than scratch the paint on an armored vehicle like a tank. To kill a tank, we need to pierce that heavy armor, and to do that, we put the laws of physics to work for us. 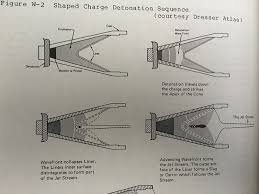 tremendous energy on a single spot, thus piercing even heavy armor.  The principle is simple and enormously effective.

The illustration on the left shows a cutaway view of a classic shaped charge munition. You’re looking at a cross-section of a hollow cone of explosives. Imagine that you’re looking into an empty martini glass where the inside of the glass is made of cast explosive that is then covered with a thin layer of metal.  The explosive is essentially sandwiched between external and internal conical walls.  The open end of the cone is the front of the munition.

The initiator/detonator is seated at the pointy end of the cone (the rear of the munition), and when it goes off, a lot happens in the next few microseconds. 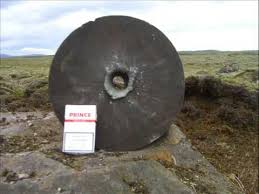 As the charge detonates, the blast waves that are directed toward the center of the cone combine and multiply while reducing that center liner into a molten jet that is propelled by enormous energy.  When that jet impacts a tank’s armor, its energy transforms the armor to molten steel which is then propelled into the confines of the vehicle, which becomes a very unpleasant place to be. The photo of the big disk with the hole in the middle bears the classic look of a hit by a shaped charge.

Now you understand why rocket-propelled grenades like the one in the picture have such a distinctive shape. The nose cone is there for stability in flight, and it also houses the triggering mechanisms.

The picture on the right is a single frame from a demonstration video in which somebody shot a travel trailer with an RPG.  The arrow shows the direction of the munition’s flight. There was no armor to pierce so the videographer was able to capture the raw power of that supersonic jet of energy from the shaped charge.

Looming deadline notwithstanding, I will do my best to answer any and all questions, but I warn you all that I might be a bit slow on the keyboard.