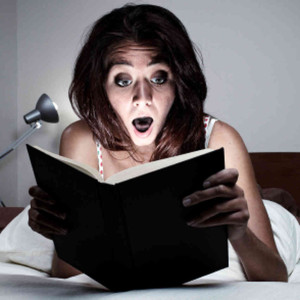 “Come on!” the bartender says. “How can a squirrel write mysteries?”

“Easy,” the guy says. “He comes up with the ending, then works his way back.”

That squirrel was onto one way to write a mystery: Know the ending, the who of the whodunit, before you start writing. Some of the most successful mystery writers of all time—e.g., Dame Agatha, Erle Stanley Gardner—did it this way.

Their formula was simple. You have a dead body and several possible suspects, each with a motive and an alibi. The killer, when revealed, is a surprise.

That’s always the fun of a Perry Mason. In the classic TV show, the redoubtable Raymond Burr would be grilling a witness on cross-examination so incisively that someone out in the gallery would be forced to stand up and say, “Yes! I killed her! But she was going to force me to give up everything I worked for!”

This trope was hilariously sent up in Woody Allen’s Bananas:

But this is not the only way to do it. Other writers “pants” their way forward, not knowing until the end who the killer is going to be. They extol this method by saying, “If I can’t guess the killer until the end, then readers surely won’t be able to!”

That’s a pretty good argument, though it may entail substantial rewriting and rewiring the plot.

A rejoinder of the plotters is this: If I work out the motive and method first, I can design a whole web of red herrings to throw readers off the scent.

James N. Frey, in How to Write a Damn Good Mystery, is of the latter type. He advises picking a killer, then writing a lengthy biography to explore and justify the murder.

Personally, I don’t like to do lengthy character bios. I find it closes me in before I really get into the story. I like a little living and breathing space for my cast.

I do, however, want to know a few key things about my main characters:

Another thing the timeline gives me is a basis for cultural markers. I like to know what music, movies, and TV shows were popular in a given year. A few will pop out that seem right for the character.

When it comes to the villain, I have to come up with the most important thing: the motive. I want to have a “hidden” motive that is revealed near the end.

That’s when I write “the speech.”

We’ve seen this in many classic mysteries. The sleuth gathers all the suspects together in a room and starts explaining the clues. Hammett does this in The Thin Man, and Gardner in his courtroom scenes.

It can also be done one-on-one, as in The Maltese Falcon.

In the speech, my hero explains the whole setup, the red herrings, the clues that lead him to identify the killer. (Note: this speech is not intended for the final product, though I may use some of it. It’s a brainstorming exercise above all else.) I work on the speech over several days, sleep on it, add layers to it. This enables me to set up the “game” from the start, to know the hidden moves made by the villain “off-stage.”

Now, I’m not a pure mystery writer. I walk down the thriller street. But I believe all good fiction has a mystery to it, a question in the readers’ minds: What is going on here? Why are these things happening to the character? Why is the character acting this way? This is essential for any genre, from romance to thrillers to literary.

Because the great driver of fiction is a reader turning the pages to find out what happens next, and why. Otherwise, the story becomes predictable. And predictability is boring.

What about you? Do you agree that a mystery element, as defined above, is essential to good fiction? And when it comes to mysteries and character secrets, are you like that squirrel who knows the ending up front? Or do you like to pants-and-wait?

26 thoughts on “How to Write a Mystery in Any Genre”