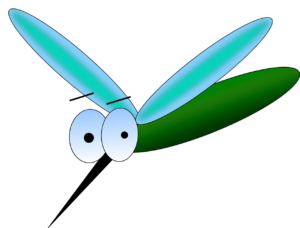 Dave Barry once said that the best time to visit Florida’s Disney World is 1965. Makes sense to me. I never saw the value in taking out a second mortgage to pack the family into a metal tube for a six-hour flight to an extended stay in a hot and humid swamp when we have Disneyland an hour away by car.

I once went golfing in Florida. It wasn’t the gators who eyed me on the tenth fairway that bothered me so much as the dang humidity. I felt like I had hot, wet towels draping my entire body, including my head. Swinging a club in a steam bath is not my idea of a good time.

And then there’s the skeeters. We have them in L.A., of course. But Florida has 80 different species of mosquito. They range from mere pests to carriers of potentially deadly pathogens. A perfect spot for a theme park!

Thus, when the Disney World location was selected, one of the first issues was, How are we going to get people to come to the Magic Kingdom in the middle of mosquito country?

Certainly that was on Walt Disney’s mind from the jump. So it was serendipity when Walt met a man named Joe Potter at the 1964 World’s Fair in New York. This impressive gent was a graduate of West Point and MIT (engineering). As one bio puts it:

During World War II, he directed logistical planning for the invasion of northern France, an operation nicknamed “Red Ball Express.” After the war, he served in Washington, D.C. as assistant chief of engineers for Civil Works and Special Projects.

In 1956, President Dwight D. Eisenhower tapped Potter to serve as governor of the Panama Canal Zone. You know what they have in Panama? Skeeters the size of canned hams. Carrying malaria, no less. One of Potter’s duties was figuring out how to control the blood suckers. Which he did.

Which is why Walt hired Joe Potter right there at the World’s Fair.

So Potter set about his task, and the first order of business was to take away the mosquitoes’ favorite breeding ground, standing water. Potter drained all the surrounding swampland and turned it into drainage ditches, so water would constantly flow.

Inside the park, you won’t find any standing water. There’s always a fountain or some sort of watery movement so the bugs can’t lay eggs.

Then there’s the architecture. Every building in Disney World is designed so that water from rain runs right off and has nowhere to collect.

And the flora: Disney World eschews plants that have soil where water can puddle.

And the fish: Disney World stocks their pools with the kind that love to eat mosquito larvae.

Now, someone may ask, why doesn’t Disney World just use a pesticide? The answer is, Walt was against it. He wanted to preserve the environment.

But they do spray….garlic! Mosquitoes hate garlic. So they use a garlic spray around the park that humans can’t smell but is decidedly anti-skeeter.

In other words, Disney World had a major problem and found a way to fix it.

First, you have to drain your novel of swampland. That’s any part of your story that is squishy, serves no purpose, doesn’t build on anything or provide a foundation for essential story material. The primary sign is a scene with no conflict or tension. Get rid of any such scene.

Second: keep the tension flowing. In every scene there should be the rushing waters of direct conflict, or at least the babbling brook of inner tension. Upon revision, look at every scene and see if you can ratchet up the tension by 10%. Doing that over and over throughout the novel creates tremendous momentum. (See also the tips from Becca Puglisi here.)

Third, eliminate any prose that feels like standing water. Cut flab and write tight. Every word counts. (You might try running sections through the free Hemingway app.) Keep special watch for the type of skeeter known as the adverb. Almost always you can squish them without any adverse effect.

Finally, spray the book down with the garlic of a good proof reader. Typos are like those annoying little mosquitoes called No-see-ums. They’re so small you almost don’t notice them, but man can they bite. Kill every one of them with extreme prejudice.

Then sit back, relax, and enjoy the release of your pest-free novel!

So…do you notice certain kinds of mosquitoes popping up in your fiction? What do you do to hunt them down?

*Research for this post came primarily from here and here.

46 thoughts on “Killing the Mosquitoes in Your Fiction”