When I was younger, I thrived on horror stories. I read every word Stephen King wrote, and I’d be first in line for the slasher movies of the ’70s and ’80s. I lost my taste for them during my fire service years, and abandoned them entirely once I started a family. I don’t know if there’s a nexus in there, but that was the timing of it.

That’s also about the time when I realized that energy lives on past the lives of some, and that those energies are drawn to me. Or, maybe it’s the other way around.

Ten, maybe fifteen years ago, I signed on for a midnight tour of Moundsville State Penitentiary in West Virginia. It’s supposed to be one of the most haunted spots in America (aren’t they all?), and I thought it would be a hoot. I talked Jeffery Deaver into coming along. We climbed onto a bus around 6 pm and drove off into the night.

The tour was led by a self-proclaimed ghost hunter who channeled Van Helsing, complete with the floppy fedora and flowing great coat. When we arrived at the prison grounds, Van saw ghosts everywhere, just hangin’ around the yard. “There’s one! There’s one!” Jeff and I thought it was a hoot.

Then we entered the hospital wing of the abandoned fortress. If you’ve seen One Flew Over The Cuckoo’s Nest, you know what the place looks like. There’s a common room that was overseen by a nurse’s station, beyond which there are a couple of operatories and then another common room. This repeated five or six times.

Remember, the only lighting we had were the flashlights that we 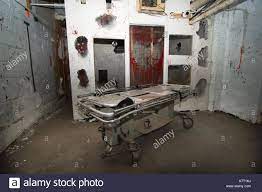 brought with us, so eerie doesn’t quite touch the atmosphere at zero-dark-early. We walked into the first one or two of the operatories, looked around, checked our watches and began talking about how we might work our way back to the bus.

The mood of the evening changed when we crossed the threshold of what I believe was the third operatory. I stopped about three steps in and could not go any farther. A dark energy surrounded me–that’s the best way I can put it, a nearly electrical feeling on my skin, but more than that, I felt so terribly sad. It was the kind of sadness that comes after the loss of a loved one. It was unbearable.

I turned and walked back out into the hallway, and the feeling vanished, as surely as if a switch had been flipped. Deaver reported feeling “something” but he night have been humoring me. Everyone else seemed to be fine. I went to Van Helsing and asked if that room was particularly energized? His response: “You notice I stay in the hallway, right?”

As the tour moved on, I told Jeff that I needed to go back. I needed to know if it was some kind of trick that Van was pulling. We parted from the group and walked back. This time, when I crossed the threshold, my knees nearly buckled. The feeling was beyond awful. It felt soul stealing.

That was the only notable incident on that tour, but later research showed that that room was used to perform lobotomies back in the ’50s or ’60s.

Now, fast-forward a few years. I was in Boston, staying at one of the fancy chain hotels to attend a board of directors for the trade association I worked for. (I’m not sandbagging on the name. I really don’t remember which one, and given the story to come, it’s best not to guess and be wrong.)

About 2:30 in the morning, I was sound asleep, alone in my room, sleeping on my left side, as I am wont to do, when someone grabbed my shoulder with both hands and placed his face about an inch from mine.

I shot out of bed, ready for war. I don’t think I’ve ever been so startled, before or since. Nobody was there, but I could still feel the imprint of his hand on my shoulder. I turned on the light, and the first thing I did was check my door. Not only was it closed, it was locked on the inside.

This was not a dream. It could not have been a dream. I saw him, for God’s sake. But several thorough searches revealed that I was still alone. The most vivid goddamn dream in the history of nightmares.

It takes a while for the body to process that much adrenaline, but ultimately, I fell back to sleep. Shortly after the sun came up, I rose, showered, tied myself into a business suit and headed down to the staff breakfast room. I was the last to arrive, but that wasn’t uncommon, given my relationship with mornings. As I sat down with my banquet eggs, I relayed the story of my nightmare, and conversation stopped.

My boss paled and asked, “What room are you in?”

Creepy, eh? Okay, there’s a coda to the story. I was on the hook for a very important, very serious presentation to a filled ballroom at 8 am the next morning. After an endless string of meetings, I returned to my room at around 11 pm. Out loud, I said, “Okay, look. I know you have a job to do, and I respect that. I respect that I am in your space, but I really need to sleep tonight, so I’d appreciate it if you’d leave me alone.”

In general, I’m not a deep sleeper in a hotel, but that night, I slept like, well, the dead.

I haven’t studied this stuff, and I don’t pretend to understand it, but I’ve come to believe that something about what makes us human projects energy, and I think that some people are better tuned to it than others. I think I’ve posted here before that I have a very strong Spidey sense about others. My first impressions of people rarely prove themselves wrong. (Truthfully, I can’t remember a single time.)

When my son was 14 or so, he got separated from the group on a camping trip and became the focus of a National Park Service search party. (In case you’re wondering, parents are not informed of ongoing searches when they are in their early stages.) He and a buddy were lost in Washington National Forest all night. Everybody turned out fine, but he tells a great story of what it’s like being in the middle of nowhere on a moonless night as the batteries in your flashlight begin to die.

We learned about the search after he returned home a week or so later. Here’s the thing, though: On the night he was lost–at the hours he was lost–I couldn’t sleep. Instead, I got up and wrote about a young teenager lost in the woods.

Okay, now that I’ve revealed my crazy card, what say you, TKZ family? In this season of spooks and witchcraft, do you have any stories to share?