If you had to name one characteristic that all great writers have, what would you say?

Imagination? Yeah, can’t get very far down the road without it. Well, actually you can write a decent legal brief, but that won’t get you many fan letters.

Persistence? Well, if you’re going to quit after one rejection letter, bad review or paltry royalty check, you weren’t meant for this business in the first place.

Discipline? Sure, I’d agree you need this, mainly because I am not very good at this.

Good vocabulary? A passion for reading? Clarity of thought?

I’ve always thought that fiction writers have a lot in common with painters. Back in college as an art major, I spent hours in life drawing classes staring at nude women and men, trying to make my hand capture in charcoal what my eyes were seeing. The exercise was meant to not just replicate reality but to strengthen that weird wiring in the brain that produces hand-eye connection. Most artists must go through this academic phrase.

Here’s an early nude drawing by an artist done in 1897: 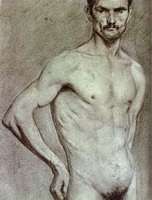 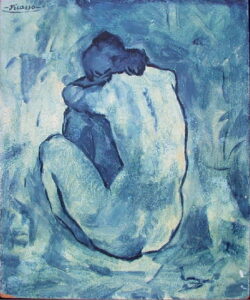 And this one a few years later: 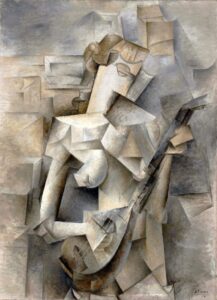 Which eventually led him to his apotheotic iconic style. 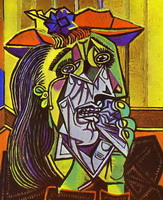 The point I am trying to make here is that yes, imagination, persistence, reading, discipline are all important. But the greatest power you might need as a writer is simple observation. Like Picasso, your ability to observe and study human life gives you the raw material from which you spin your stories.

One of my favorite writers, David Sedaris, is known for turning his acute observational skills into hilarious essays about the human experience. (My favorite is “Me Talk Pretty One Day” about his sad efforts to learn French). He has some great tips on how writers can tune into their surroundings to enhance their fiction. Click here.

You need observation to create description, to establish mood, and make your setting come alive. This is especially important if you’re working in a genre like sci-fi or fantasy where you are literally building a world from scratch. But let’s go with simple description. Many writers, in my opinion, skimp on this, thinking a cursory brush stroke or two will do the trick. Take, for example, a sunset over a lake. You could write:

The water glittered like molten gold in the light of the setting sun.

Yeah…but meh. If you’re gonna use a metaphor or simile, it better be fresh as a…(you fill in the blank).

We used the power (or lack thereof) of observation for a scene in our book Island of Bones. In it, an ex-cop named Mel Landeta, who is slowly going blind, is sitting on the beach with Louis as the sun is setting.

The breeze was kicking up. Louis closed his eyes and drew in a deep breath of the tangy salt air. He listened to the breaking waves.
“Tell me what it looks like,” Landeta said.
Louis opened his eyes. “What?”
“The sunset.”
“I’m not falling for that again. I know you can see it, some of it anyway.”
“All I can see is a big blur of color.”
“Well, that’s all it is.”
Landeta laughed as he shook his head. “Christ, you’re hopeless. Tell me what it looks like.”
Louis looked back at the sky and shrugged. “I told you, it’s colorful.”
“Try again,” Landeta said.
Louis took a deep breath. “Okay, it’s red at the bottom and kind of yellow at the top.”
Landeta shook his head. “You can do better than that.”
“It’s really red and really yellow. Shit, Mel, you tell me.”
Landeta lifted his face to the sky, his eyes closed. “The clouds are wispy, and it’s like someone tossed a bunch of yellow and pink feathers against a freshly painted red wall. And the sun is laying itself down on the water, giving in, like you would if you were going to sleep and knew you had nothing but good dreams ahead.”
Louis looked at Landeta, then back out at the sky.
“I can’t do better than that, man,” he said.

This is the ending of the book, which circles back to a minor chord theme about Mel trying to teach Louis to slow down and observe (ie enjoy) life. Louis, as a cop, is very observant in his work, picking up on human tics, crime scene idiosyncrasies, and the tiniest bread crumb of clues. But there isn’t a creative bone in his body. You, as a fiction writer, need to be what Mel Landeta is — both cop and poet.

You also need observation powers to write great dialogue. As we’ve said here many times, dialogue is not real conversation. Real conservation is banal and bloated. Good dialogue is sleight of ear, a trick really, wherein you the writer listen to real folks talking and then recast it into stylized “conversations” between characters.  You must observe real speech patterns, idiosyncrasies, idioms, dialect, and accents to make each character you create feel real and singular.

A few good examples that I could find:

From Cloud Atlas by David Mitchell

And an example from one of my favorite books, Cormac McCarthy’s, The Road.

Do you know where we are Papa?

Well. I think we’re about two hundred miles from the coast. As the crow flies.

As the crow flies?

Yes. I means going in a straight line.

Are we going to get there soon?

Not real soon. Pretty soon. We’re not going as the crow flies.

They can go wherever they want.

But what do you think?

I like this because it feels so authentic, this conversation between father and son and also because its bare-branch construction mimics the apocalyptic wasteland.

When you observe, be it humans or nature, always be on the lookout for what we here at TKZ call “the telling detail.” Don’t lard on adjectives, metaphors and such. (Go back and read James’s recent take on this in his post Don’t Gild Your Lilies.)

I remember listening to Mike Connelly talk about how he looks for telling details in creating his characters. He talked about how he wanted to convey that an outwardly taciturn detective (I forget which book) was actually an emotional mess inside. How did this manifest in description? He has another character observe that the ends of the detective’s glasses were chewed to nubs.

Here’s a great quote from Raymond Chandler about the power of the telling detail on readers:

“The things they remembered, that haunted them, was not, for example, that a man got killed, but that in the moment of death he was trying to pick a paper clip up off the polished surface of a desk, and it kept slipping away from him, so that there was a look of strain on his face and his mouth was half opened in a kind of tormented grin, and the last thing in the world he thought about was death.”

A couple other hints about using your powers of observation before I go.

Use All Your Senses.  Beginner writers tend to rely too much on sight alone. Smell, science tells us, is far more evocative. Here’s the opening of Joanne Harris’s Chocolat:

We came on the wind of the carnival. A warm wind for February, laden with the hot greasy scents of frying pancakes and sausage and powdery-sweet waffles cooked on the hotplate right there by the roadside, with the confetti sleeting down collars and cuffs and rolling in the gutters.

Never Generalize. Be specific: I find this is a common weakness in our First Page Critiques, that the writers opt for generalizations like “handsome” or “hot weather” when a well-observed specific would be more powerful. Here’s Gabriel García Márquez describing his village is One Hundred Years of Solitude:

Macondo was a village of twenty adobe houses, built on the bank of a river of clear water that ran along a bed of polished stones, which were white and enormous, like prehistoric eggs.

Or Hemingway setting his scene in A Farewell To Arms.

In the late summer of that year we lived in a house in a village that looked across the river and the plain to the mountains. In the bed of the river there were pebbles and boulders, dry and white in the sun, and the water was clear and swiftly moving and blue in the channels. Troops went by the house and down the road and the dust they raised powdered the leaves of the trees. The trunks of the trees too were dusty and the leaves fell early that year and we saw the troops marching along the road and the dust rising and leaves, stirred by the breeze, falling and the soldiers marching and afterward the road bare and white except for the leaves.

And this this sharply observed description from Jack London in White Fang inspired some of my own description of Michigan’s Upper Peninsula:

Dark spruce forest frowned on either side of the frozen waterway. The trees had been stripped by a recent wind of their white covering of frost, and they seemed to lean toward each other, black and ominous, in the fading light. A vast silence reigned over the land. The land itself was a desolation, lifeless, without movement, so lone and cold that the spirit of it was not even that of sadness. There was a hint in it of laughter, but of a laughter more terrible than any sadness — a laughter that was mirthless as the smile of the Sphinx, a laughter cold as the frost and partaking of the grimness of infallibility. It was the masterful and incommunicable wisdom of eternity laughing at the futility of life and the effort of life. It was the Wild, the savage, frozen-hearted Northland Wild.

To close, I’ll go back to Picasso. Here is one of his earliest drawings, from his childhood. 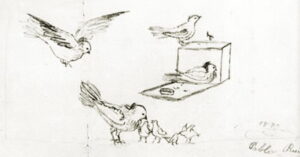 As a student, he filled the margins of his notebooks with pencil drawings of the birds, animals and people he had seen. One of these notebooks is in a museum in Barcelona, along with a note his first grade teacher sent home to his mama:

Luckily, his mama didn’t listen. And Picasso never stopped paying attention to the details, to what was really important.