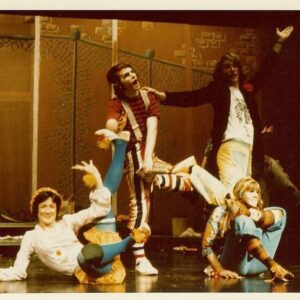 There was a time in my life when I thought I wanted to be an actor. As I mentioned in a post back in January, I was cast as Lamar in one of the world’s first amateur productions of “Godspell.” (In the picture, I’m the guy with the striped pants and socks.) Every performance was sold out. In fact, we had to add additional performances, and those, too, were sold out. My solo song was “All Good Gifts” and every performance got a standing ovation. I even got a fan letter from a freshman cheerleader–much younger than I, who, at the ancient age of 17, could not be seen fraternizing with a lower classman (classperson?). It was very heady stuff.

I didn’t think I was very good in the role, but who was I to judge, right? And what a rush! Applause was SO way more exciting than lots of speaker points from the judges of debate tournaments. I was writing stories pretty steadily even back then, and I remember speaking to my buddy Steve (he’s the guy in the yellow pants and sport coat) that maybe one day I could write a play and star in it.

The next play on the schedule was Thornton Wilder’s “Our Town”–quite a pivot from “Godspell”–and I won the role of George Gibbs. Buddy Steve (who went on to a wonderful career on Broadway and later in TV commercials) was the Stage Manager. Those are arguably the two male leads in the show.

For those who are unfamiliar with the “Our Town”, the titles of the three acts pretty much describe the story, which is set in Grover’s Corner New Hampshire in 1901: Act One-Daily Life; Act Two-Love and Marriage; Act 3-Death and Eternity. George Gibbs (my character) falls in love with Emily Webb, who ultimately dies, leaving George bereft.

Yeah, the feel good play of the year.

(I hear you purists out there already, warming up your computers to tell me how superficial my interpretation of the play is, but stand down. If you read on, you’ll see that that’s kind of my point.)

In “Godspell”, I got to perform. I got to sing and dance and do pantomime, but I never really had to act. Sure, there’re the crucifixion scene, but that was designed as a scene-chewer. Plus, it was sung, and ultimately danced.

“Our Town” flipped that formula solidly on its head. That role was all acting. I was expected to make other people’s words come to life, and I had no idea what I was doing. There’s a scene in Act 3 where George is alone at Emily’s gravesite, speaking to her, and he comes unglued. This is the Big Moment of the play, and I had nothin’. Not only had I never experienced real loss–hell, even my first dog was still alive at the time–but I grew up in a family where crying was shameful.

Now I was supposed to cry in front of all my high school buddies? I couldn’t do it.

Full disclosure: I guess I faked it okay because we got more standing O’s from the audience and no one kicked my ass for my performance. (Full disclosure redux: Parents and friends are not the most punishing reviewers.)

I hated the whole experience. I hated the emotional exposure, and I hated the notion of making a fool of myself live and in color on the stage. It wasn’t the crowd that bothered me–hell, I’ve always liked a crowd. It was the notion of someone seeing behind the curtain to reveal the real me, who was far different than the me I worked very hard to project.

Did I mention that I was 17 years old?

As an aside, about 25 years later, I was on the staff of the Virginia Governor’s School for the Humanities and Visual and Performing Arts. It was a monthlong residential program where rising juniors in high school gathered at the University of Richmond with the best fellow singers and dancers and actors from high schools throughout the state. I was teaching screenwriting at the time, but we had to teach an interdisciplinary course as well, so I developed one called “Truth and Labeling” in which kids explored the differences between who they pretended to be and who they really were. The course was a big hit. Just sayin’.

So, what does any of this have to do with writing? Here it is: Just as actors have to learn to bare their emotions and their feelings to the audience, we fiction writers have to find a way to do that on the page. If the sad parts don’t make us cry when we write, and the funny parts don’t make us chuckle, then we’re just phoning in our performance, and the reading audience will see right through it.

To be believed, you need to live the moment on the page. We talk about first lines and inciting events and characterization, and all of those things are important, but none of them are as vital as true emotion spilled onto the page. On those rare occasions when you find yourself squarely in the zone, the words are flying onto the page and you know that you are channeling something raw into the characters on the page, understand that you’re flirting with your bestseller moment.

Once it’s committed to the page, save it, print it, do whatever you have to do to preserve it, and then promise yourself not to touch it. Not to edit a word. That is your heart, as recorded live and in color as it presented itself. It’s important stuff, even if you never use it in your story, because it documents you. The real you.

When you return to the WIP and you write the second (or fifteenth) draft, you can edit and change that magical piece however you want, or not at all, to fit the story’s needs, but treasure the raw source material it came from.

Now that I’m more than a few years older than 17, I think that I would like to try my hand at acting again. I have a lot more life to tap into, and after a few million words in print, I think I’ve pretty much peeled the curtain away.

That audience is very enticing. I still like the sound of applause.

Now, if I could just find a way to edit my performance live on the stage.

What say you, TKZ family? Do you have it in you to get honest on the page?

20 thoughts on “You’ve Got To Live The Moment”