Almost everything will work again if you unplug it for a few minutes…including you. — Anne Lamott.

A wail of agony came from the man cave. Followed by a chain of profanities. It was only 3 o’clock but the thought crossed my mind that maybe I needed to serve the husband his gin and tonic a little early.

Five minutes later, he emerged from the cave red-faced angry. “I. Need. Some. Help.” It came out in a strangled whisper.

I set aside my laptop and followed him into the cave. He had been working for hours on a long free lance document and it had…just disappeared, he said.

I know from experience that he never saves anything. Except his old underwear and tax returns from the 1990s. “Well, let me take a look,” I said.

Cut to the chase. I finally got him away from the computer and found the doc for him. He had saved it in the wrong place. This happens with his underwear occasionally. He assumed the helm and I started back out of the cave.

“Also, the printer’s broke,” he said. “It won’t printing anything.”

The printer was brand new, and because it is wireless, it sometimes just gets in a bad mood. I tried to print the doc. Nothing. I fiddled with the commands. Nada. I copied the doc and tried again. Just a blinking “error” message.  I turned the printer around and yanked out the cord.

“What are you doing?” the husband yelled.

I plugged the cord back in. The printer spit out the doc. I went to the kitchen and made myself a vodka tonic.

I have writer’s block. It’s been going on, oh, maybe three weeks now. Actually, I don’t believe in writer’s block. It’s an excuse. I just can’t seem to write anything worth saving. I know the idea for the story is good. But I am about 10K words in and I seem to have lost my way. So I unplugged. 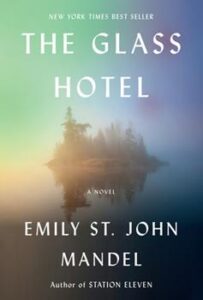 I stopped writing. Instead, I’m playing pickleball every morning for two to three hours. I’m getting pretty good. I’ve taken up running again. I’m getting stronger. I’ve also been reading a lot. Right now, I’m lost in the stars of Emily St. John Mandel’s The Glass Hotel.  I loved her dystopic masterpiece Station Eleven, and this one’s equally enthralling. She’s a master storyteller, the pacing is breakneck and she breaks every rule in the book. She jumps back and forth in time. She switches points of view fearlessly. It’s fragmented, elegant and deeply moving.

Few writers bring out the envious in me. As a writer, I’m a fair juggler, and can keep four or five balls in the air. Mandel juggles flaming chain saws. And this virtuoso performance has left me even more paralyzed in my own work.

Don’t worry. I will finish The Glass Hotel soon, and I know that I will find my way out of my thicket and back onto my path.

I will plug back in. 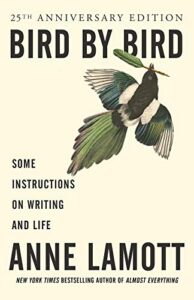 I know this because I have also been re-reading a lot of Anne Lamott’s work. She’s my go-to cheerleader when I get a little low about writing. If you haven’t read her, please do. Start with Bird By Bird: Some Instructions On Writing And Life. Therein you’ll find great advice on everything from how to follow your outline to how not to worry about your crappy first drafts.

Looking for other things she had written, I found some of her essays. One was titled “Dust Jacket.” It was about reissuing her first not-very-successful book. This resonated with me because my sister and I are re-editing our book Dark of the Moon for self-publishing. It’s tough going because as our freshman effort, it has warts, stray chin hairs and occasional flashes of rosacea. Lamott made me feel so much better with this passage:

This book of mine, “Joe Jones,” is the street person of my books. It’s my raw, wolfy child…My great friend Jane Vandenburgh helped me edit it slightly — not with a fine-tooth comb, but with an afro pick, big spaces between the teeth so as not to tug too hard. I hadn’t read it in 17 years, and when I finally did, this winter, I could see why it had not done well. It wobbled and flopped, and didn’t fly in the upward trajectory that I had hoped, and certainly my readers and critics must have hoped. It’s in the present tense, which I don’t like, but I do love the characters. And I can see its part in my evolution as an artist: All of the elements of what were eventually going to lift me out of the swamp are there, beating against the walls of the cafe.

Don’t you love that? That in your early work (published or un), you can glimpse the writer that you will become. And she offered this, an encouragement, against all pressures of our business, to be the writer you need to be:

It’s like meeting the girl I was in high school or in my 20s, with all those affectations, those tics and vague accents, who knew more then than I ever would again; who tried to be like other young women, because everyone said to be — as e.e. cummings said, “Being nobody but yourself in a world which is doing its best, night and day, to make you like everybody else means to fight the hardest battle any human can fight.”

But the passage I really liked was from her 1996 essay titled “How To Be A Writer.” This really hit me where I needed to be hit:

Here’s the best advice I can give you: go read the book of Ezekiel. Trust me on this. Read about him coming upon the dry bones of a people who had given up, who were lifeless, without hope; until, because of Ezekiel’s presence, breath came upon them, and they came back to life.

The message is, Have heart, don’t panic: spirit revives us. A people were made whole again by breath, by the breeze of attention being paid. That’s so incredible. Find a community of writers with whom you can belong, who will read your stuff and help you get better. Maybe you can encourage them to keep on writing, as they encourage you. And pay closer attention to life. Get your best work done every day. Be the breeze.

Peace out, TKZ friends. Thanks for being here to listen. Be the breeze.

32 thoughts on “How To ReBoot”