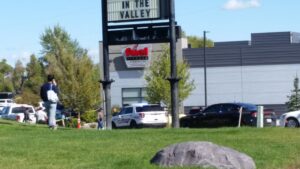 This is a post I never imagined I’d write, nor is it one I ever wanted to write.

September 16, 2021 started as gorgeous sunny morning in my hometown of Kalispell, Montana.

The night before had been the first freeze of the season. Still-hopeful gardeners covered tomato plants with blankets. Burning bushes transitioned from green to deep pink. Trees were turning yellow, red, and orange.

Kalispell is not without crime. Thirty years ago, we didn’t lock our houses and often left keys in the ignition. No longer. Still, it’s generally a quiet, safe community.

I drove to my regular morning workout at Fuel Fitness gym on Highway 2. The parking lot is behind the building on the north side. I parked in the last slot at the far end, away from other cars.

The Zumba class takes place in an interior studio with south-facing windows, separated from the main exercise equipment area. The music is loud, drowning out exterior sounds.

In the Zumba class, we never heard the gunshots.

At 11 a.m. the music had just ended on the last song when an employee hurried into the studio. Calm but nervous, she said there had been a shooting in the parking lot and the building was locked down. Police and sheriff deputies were on scene.

More vehicles, with lights and sirens, arrived every minute.

We watched two ambulances and a fire truck scream past the studio windows facing Highway 2.

People in the main gym area were looking out the north windows at the parking lot. That didn’t seem smart so I stayed well away.

Officers filled the lobby and check-in area. More lined up outside the glass wall facing the lot.

Employees moved in and out of the manager’s office. They told us that the scene was secured and there was no more danger but reiterated no one could leave the building.

Rumors and speculation circulated among about 50 patrons as we waited. People called loved ones. I received texts asking if I was safe. A Zumba friend had left her phone in her car. Her sister texted me saying she couldn’t get hold of her. Were we okay? I gave the friend my phone to reassure her family.

After about 15 minutes, the two ambulances left, sirens wailing.

Details dribbled out from people who had witnessed the incident through the north windows. 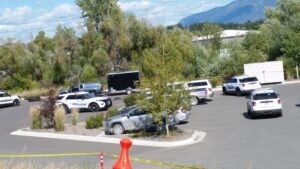 The alleged killer’s blue truck and black trailer he was living in.

A man had been living in his blue pickup and black cargo trailer in the gym parking lot for a couple of weeks. For $25/month, he could use the gym’s showers and bathroom. But apparently there had been complaints about him.

Later I learned he had previously been living in the parking lot of another gym and had been asked to leave the premises.

On this day, the manager and assistant manager went out to the parking lot and told him he had to go. They refunded his fees. He demanded more money. They refused. He said they were going to die today and pulled a gun.

According to witnesses, he shot the manager. The assistant manager took cover and escaped injury.

A gym patron was in the parking lot, checking on his dog in his truck, when he witnessed the commotion. He grabbed a gun from his truck and ordered the instigator to stop. The instigator shot at the patron who returned fire.

Both the instigator and the patron were wounded in the exchange of gunshots.

Locked down inside the gym, we knew none of these details, only that one person was dead and two were wounded, none of them identified. We were assured there was no further danger but we could not leave because the parking lot was a crime scene.

In the lobby, a man held the leash of a large, tan-and-white pitbull, patting him and talking to him. The dog sat quiet, panting. He was amazingly well-behaved, considering his owner, the Good Samaritan, had just been shot.

An officer announced that they needed witness statements from everyone inside, whether or not they had seen or heard anything. Then, one by one, we would be escorted outside to check for damage to our vehicles and to retrieve personal belongings.

The witness form asked for name, address, phone numbers, date of birth, and information about what we had seen or heard. Mine was easy since I had none.

People milled around and speculated.

Snippets of conversation: How could someone shoot an unarmed guy like that? He was just doing his job. It’s just plain wrong. I hope the manager and the hero are all right and the effing shooter is dead. 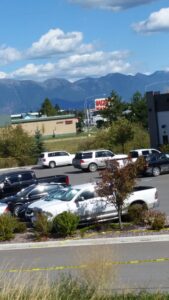 My white Toyota is the last car in the line. The black trailer was about 50 feet behind my car.

At that point, I decided it was safe to look out a window to check my car. Yellow crime scene tape ran behind it but it appeared undamaged. However, several officers stood near it. That made me wonder if it had been hit. I told the officer collecting witness statements that my car was at the far end of the lot. She made a note and said she would call me next.

She also said no cars would be allowed to leave the lot because of the ongoing investigation. People who had not witnessed the incident would be released soon but needed to call for rides.

A sheriff detective said I couldn’t go to my car because it was too near the crime site. Since I had witnessed nothing, I would be permitted to leave the area, escorted by an officer.

Perhaps 50 officers were clustered in groups around the lot, talking. That had to be every on-duty law enforcement officer in the county, plus more. At least 20 city, county, and state vehicles with flashing lights blocked the entrance and lined the highway.

The officer escorted me to one boundary of the yellow crime scene tape strung across the parking lot exit. He turned me over to a different officer who logged my name on a check-out sheet. I ducked under the crime scene tape and continued to the exit. Another man approached and said he was a chaplain for the police and fire department and offered assistance, now or later, with processing the incident. 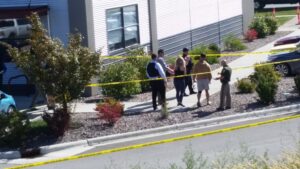 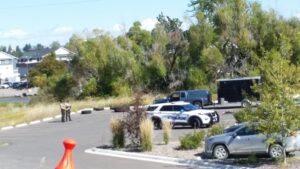 The alleged killer’s blue truck and black trailer. My car was about 50 feet behind the trailer.

Several hours of uncertainty followed. But, in a small town, everyone knows everyone. Between phone calls and texts, by about four p.m., I had figured out:

The instigator was in critical condition in the hospital;

The Good Samaritan hero was in good condition in the hospital;

The manager was dead. His name was Matthew David Hurley.

Matt was 27 and engaged to be married, always friendly, smiling, and welcoming.

A couple of weeks earlier, I had asked him if he could put up a poster on the bulletin board about a book event I was doing with three other mystery authors. “Sure!” he said. “We love to support locals. It’s all about community.”

The next morning, the parking lot was cleared and we could pick up our cars. The pavement had been scrubbed of blood stains. The blue truck and black trailer were gone. No sign remained of the deadly showdown.

Matt was right about community.

That evening, a memorial was held in the parking lot. When I arrived, the area was packed with vehicles and about 200 people milled around outside, including Matt’s extended family who had arrived from Missoula.

A bonfire in an oil drum took the chill off the night.

The crowd ranged from a man with long flowing white hair to middle-aged people to young families with kids including an infant less than a month old. Matt’s sister held the leash of his beautiful Golden Retriever who wanted to make friends with everyone, including a dachshund that wasn’t quite sure about the big dog. Coworkers, gym customers, neighbors, buddies, and family—everyone was supportive of each other…and heartbroken.

I learned from a tearful employee that Matt had been killed instantly. She worried he might have been in pain and was reassured he had not suffered.

Someone pointed out the Good Samaritan hero who had been released from the hospital. He attended the memorial with his wife and teenage daughter. I’d seen him working out at the gym but didn’t know him. I learned his name is Will, a serious, unsmiling man in his forties.

He and the assistant manager, who escaped death during the shootout, were deep in conversation. After several minutes, they hugged like two buddies who’d been in the trenches together.

As candles were passed out, a handsome older gentleman asked if he could light his candle from mine. He was Matt’s grandfather. He proudly told me that, two years before, his then-twenty-five-year-old grandson had been promoted from assistant manager at the Fuel Fitness in Missoula to the general manager of the new Kalispell store.

Soon after Matt had started his new job, Grandpa drove 120 miles from Missoula to surprise him. He told the clerk at the front desk he needed to see the manager because he had complaints. Matt hurried out from his office, concerned about an unhappy customer, only to recognize his grandfather, the prankster.

At last, the crowd thinned around Will, the Good Samaritan hero, and I went over to him.

His fast, courageous action stopped the shooter. If Will hadn’t acted, who knows how large the scale of the tragedy might have been with a building full of potential targets.

I said, “Thank you for what you did.”

He doesn’t know me. I don’t know him. But, in the instant our eyes met, we both recognized the life-changing enormity of Matt’s horrific murder on family, friends, coworkers, gym patrons, neighbors, and the entire community that had once been our safe little town.

Will started to shake hands but instead grabbed me in a hug.

We held on tight for a long time.

The life we knew was forever changed.

Correction: the instigator did not die as I had previously been told. According to the Daily Interlake newspaper:

Kalispell Police Chief Doug Overman said his agency would not release the suspected killer’s name until formal charges are filed. Overman said the department’s case was submitted to the Flathead County Attorney’s Office on Tuesday.

County Attorney Travis Ahner had a brief comment on the investigation.

“Our office is reviewing the initial investigative reports from this incident that have been submitted by the Kalispell Police Department,” Ahner said. “They have kept us updated throughout the incident and ensuing investigation, and I’m confident that the matter is being handled thoroughly and appropriately.”