Recently I did a manuscript critique for charity. This was a much longer version of what we regularly do here at TKZ with our First Page Critiques, about 30 pages. But it’s funny…some of the same issues we talk about in 400-word samples are also readily apparent in this longer sample.

But one thing really strikes me about both: Often the writer doesn’t seem to have a firm grasp on what their scene is “about.”  And this is a fatal flaw that affects your plot structure and your characterizations.

I was going to do a full-throttle post on this for today when I realized (with that little nagging voice that comes with older age) that I might have covered this before. Sure enough, there in the archives was my post from October 2019: “What’s Your Point? Figuring Out What Goes Into Each Chapter.

It’s worth a revisit, I think. Back in 2019, one of our regulars here BK Jackson, posted this comment:

The one of these I fumble with the most is having a goal for every scene. Sure, it’s easy when they’re about to confront the killer or it’s about a major plot point or a clue, but what about scenes that just set the stage of story-world and its people? Sure, you don’t want mundane daily life stuff, but sometimes I write scenes of protag interacting with someone in story world and, while I can’t articulate a specific goal for the scene, it seems cold and impersonal to leave it out.

Working with newer writing students, I’ve discovered that some write a scene…because they are trying to clarify the ideas for themselves, not for the reader.

This is exactly what was going on with my recent critique. The writer offered three completed chapters. In Chapter 1, he seemed to have a good grasp of where he was going: A man (I’ll call him Dan) returns to his small hometown of Tomales, California on a visit but learns about the mysterious death of a college friend. Interweaving personal revelations about his family is this possible murder and Dan begins to feel compelled to investigate. Good! Amateur sleuth sub-genre. A mysterious murder. Family secrets mixed in. Nice start.

But then came chapter two. It flashbacks 20 years prior (with a time tagline to alert us) and we get the 18-year-old version of Dan who, on scholarship, is entering Stanford University, where he feels inferior. The only action in this chapter seems to be when a roommate drags him to a cigar-frat party, telling him he needs to better himself so he can get in with “the right people.” (The title of the book). Dan, in his cheap suit and bad haircut, feels out of place among the swells and the beautiful coeds. The chapter ends with him yearning to be in this fancy world.

Chapter 3 goes back to the present. Dan, now a lawyer with a family, meets his old friend (and four other men in their circle from Stanford) for drinks. As the alcohol flows, the past (and Dan’s jealousy and inferiority complex) flairs anew. Dan tries to bring up with the death of the college friend (a shy kid who the others knew but was not part of their group) and everyone cuts him off. Most of the chapter is backstory on each of the men in the frat circle — how successful they are now. Dan leaves the bar and meets his wife for dinner. The end of the chapter is Dan thinking that someone in his old cigar group knows something about the murder and he thinks that no matter how far you get in life, you’re just an older version of your young insecure self.

Now, there was some good writing in the chapters. But do you see the issue? I got the feeling the writer, after the decent set up of Chapter 1, wasn’t sure where to go plot-wise. It was as if he was thinking, “Oops! I’ve hit 2000 words, I better wrap this up!” and just stopped.  I told him, gently but firmly, in the critique, that he didn’t have a firm grasp of the PURPOSE OF EACH SCENE AND CHAPTER.  The short synopsis that came with the submission seemed to verify this.

Now, I am a confirmed pantser. I don’t outline. But I never start writing a chapter until I have figured out exactly what I need to accomplish in each. To quote myself from my old post:

For some writers, this comes naturally, like having an ear in music. But for many of us, it is a skill that can be learned and perfected.

No, you don’t need to outline, but you really need to stop and ask yourself questions before you write one word: How do you divide up your story into chapters? Where do you break them? How long should each chapter be? How many chapters long should your book be? And maybe the hardest thing to figure out: What is the purpose of each chapter? Or as BK put it, what is the “goal?”

The first chapter is relatively easy. To review what we talk about all the time with our First Page Critiques: An opening chapter should establish time and place, introduce a major character (often the protagonist or villain), set the tone, and set up some disturbance in the norm. (A body has been found, a gauntlet thrown, a character called to action).

But, as BK and Yeats note, things tend to fall apart after that. The deeper you get into your story, the harder it becomes to articulate what needs to happen within each chapter. For those of you who outline, maybe it’s easier. But I’ve seen even hardcore outliners lose their way. When you sit down to write, sometimes, it just pours out in this giant amorphic blob, until, exhausted, you just quit writing. End of chapter? No, end of energy because you didn’t pace yourself.

Each chapter needs a good beginning, an arc, and a satisfying ending. I don’t know if this is helpful, but as I told my critique person, I think of each chapter as an island. I figure out the “geography” of each island and then — and this is important — I build bridges between them. 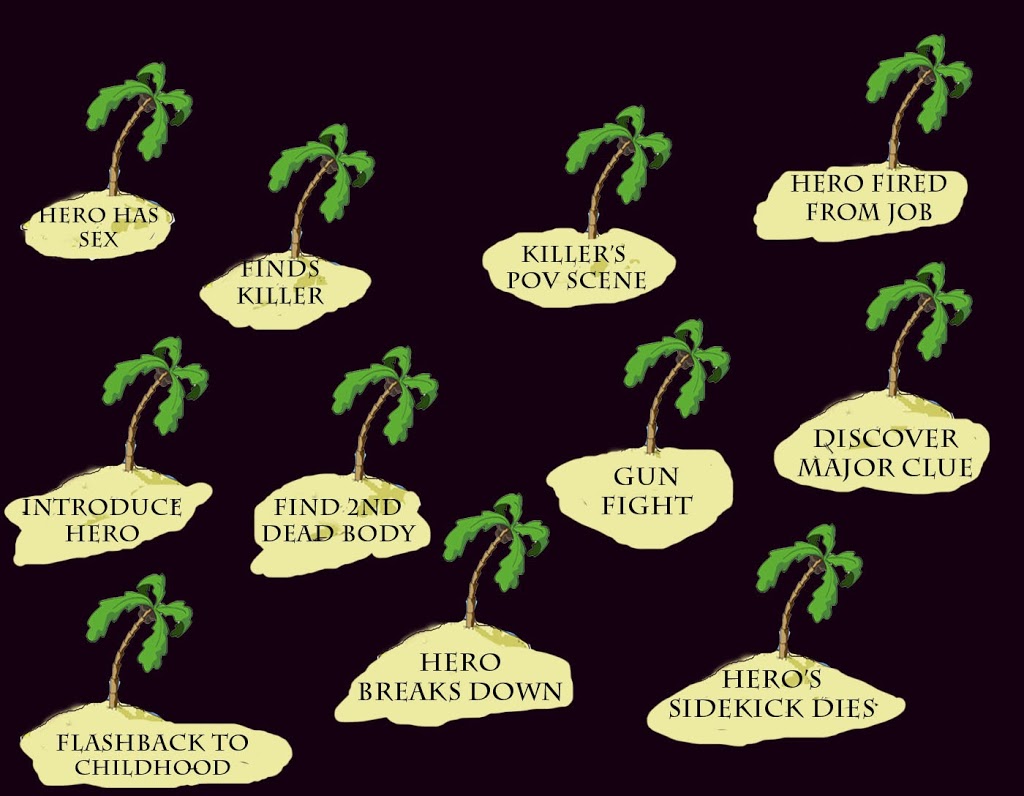 Here are a few other techniques I’ve found helpful:

Write a two-line summary before you start each chapter. For a revenge plot, you might write “In this chapter the reader will find out villain’s motivation for killing his brother.” Or in a police procedural you might write: “In this chapter, Louis and Joe put together the clues and realize Frank isn’t the killer.”

Make every chapter work harder, to have secondary purposes. Main purpose: “In chapter four, Louis goes to UP and finds evidence on the cold case of the dead orphan boys.” But secondarily: “The reader gets some background on Louis’s years in foster care.” (character development plus resonates with lost boy theme) Also: “Add in good description of the Upper Peninsula.” (Establishes sense of place and underscores desolate mood.”).  So I accomplished THREE goals in that chapter.

Don’t visualize your book as a continuous unbroken roll. Think of it as a lot of little story units you can move around. Think Lego blocks, not toilet paper. Some writers draw elaborate story boards, others use software. I use Post-It notes, color coded for POVs, and shuffle them around on a poster board. I love this cartoon from Jessica Hatchigan’s blog on how to storyboard your plot: 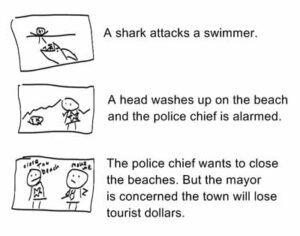 Look for logical breaks to end and begin chapters. You might change locations. Or point of view. Or there’s a change in time (hours or years depending on your story). Maybe there is just a change in dramatic intensity. Say you just wrapped up a big mano-a-mano fight. The next chapter might be your hero licking his wounds as he pours over old police files (what I call a “case chapter or info chapter.”) It goes to pacing. Not every chapter has to be wham-bam-thank-you-ma’am. Follow up an intense action scene chapter with a slower chapter that allows the reader to catch their breath. Just make sure it advances the plot!

Think resolution or big tease. As I said, every chapter has its own mini-arc that fits into the major overall arc of your story. So, in a sense, most chapters should “resolve” themselves in some way. A car chase ends. A victim dies. Two cops figure out a major clue and decide to act. One character tells another something important about their background. However: It’s also effective to stop just before the climax. You lead your reader right up to the edge of a tense moment then you end the chapter. Just make sure you deliver in the next one.

So, in summary, as I told my critique writer, you have to get the elbow grease of the brain working before you write. Every chapter needs clear goals, things you need to accomplish in it.  Stop. Look. Listen to your inner voice and those of your characters. Then…write right.

29 thoughts on “What’s It All About, Alfie?
Figuring Out Chapter Arcs”