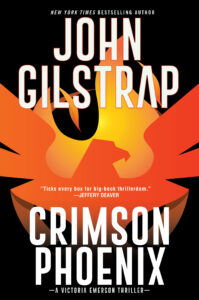 A trait common to Gilstrap men is that as we age, we get cranky. The madness of 2020 added fuel to my ever-smoldering fires, manifesting itself as a pervasive need to scream my frustrations into the night. NOTE: The night doesn’t care. I’m pretty sure it didn’t even hear me.

To be honest, the certain malady-that-shall-not-be-named played nicer with me and mine than it did with many, but it upended so much and introduced such angst that there were times when I didn’t know what to do with the stress. Alcohol and Netflix helped, but there are limits, you know?

I react to the news of the day, and those reactions sometimes make writing especially hard. In times of major stress and distraction, I have difficulty summoning the concentration necessary to write fiction. In the months following 9/11, I wondered if I’d ever be able to write a convincing scene again.

When the state and federal governments shuttered all of industry back in late February and early March of last year, people who trust me with information that I probably shouldn’t know shared with me the terrifying reality of what many intelligence professionals thought was going to happen. The United States came this close to a total collapse of our food distribution system.

We all saw how petty and feral our neighbors got over toilet paper and hand sanitizer. Imagine the consequences if no food made it to supermarket shelves and no drugs made it to the pharmacy–and that there was no immediate means to repair the system. 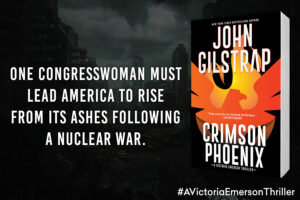 And it almost happened in the exact same sleeve of time when I was writing a book about the collapse of American civilization in the wake of an apocalyptic event. It felt a lot like writing about a house fire as flames were rolling over my head. Unnerving, to say the least.

I managed to finish that book, more or less on time. It’s called Crimson Phoenix, the first entry in a new thriller series, and I think it’s one of the best things I’ve ever written. It hits the shelves on February 23. A click on the pictures or on this link will take you to a full description of the novel, but very briefly:

A rapid-fire series of communication fumbles leads to World War III, which lasts all of eight hours. By the time it’s over, the Unites States is in ruins. Millions die, yet millions survive. With all the infrastructure gone, elected leaders are unable to communicate with people outside of the bunkers that protected official Washington. It falls to individual citizens to figure out a way to continue living.

It doesn’t take long for the weak to turn feral. In one corner of West Virginia, though, a single mom named Victoria Emerson turns out to be the leader that everyone’s been looking for. Here’s the thing, though: She doesn’t want to lead. In fact, she quit Congress that very day because the rules of the Annex—the bunker to which the House and Senate are evacuated to—would not allow her children to accompany her. All she wants is to protect her family from harm. But when a community of desperate refugees instinctively look to her for leadership, she cannot turn away.

In writing Crimson Phoenix, I came to realize something that I guess I always knew, but never gave a lot of thought to. I call it the Concentric Circle Theory. As a husband and a father, my job is to protect my family from harm, which puts me in direct conflict with other husbands and fathers (and mothers and wives) who feel the same duty. One of the things that make nightmare scenarios so nightmarish is that human beings can turn every bit as feral as any other animal. The strong will prey on the weak every bit as viciously and reliably as wolves will prey on smaller animals.

Sounds dark, doesn’t it? But that’s not the way it turned out.

By the time I finished writing Crimson Phoenix, I realized that rather than writing about disaster, what I really ended up writing about was hope. Even in the worst of times, there’s good to be found in people, and great leaders will help others find that good in themselves. Great leaders also understand that many of the trappings of “civilized society” are contrived in comfort, and become irrelevant once the balloon goes up. When people are pushed hard enough, violence is inevitable. It’s understandable and even forgivable. It falls to Victoria to recognize the times for what they are and to help people understand that for every evil and for every act of violence, there are at least equal elements of kindness. Sometimes, though, the kindest approach is to wreak violence on offenders.

This introspection on human nature led me to a much calmer mental state than I occupied before I wrote the story, though perhaps at the cost of an even deeper cynicism.

Overall, this is new territory for me. It’s rare that I learn valuable life lessons through the act of writing. I hope it’s not like this again anytime soon.

What say you, TKZ family? Have your writing adventures ever led you to significant self-discovery?

7 thoughts on “Flying Too Close to Reality”