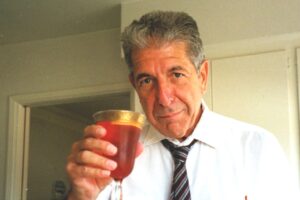 I have an odd relationship with the songs of the late Leonard Cohen. If I am depressed I can usually put his music on shuffle and feel better after a while, such as two or three months. If I’m feeling fine and happen to hear one of his songs — and they are all over the place, in movies and television series and commercials — I go so deep into the gloom cave that I think I’m never going to crawl out.

So it is that I recently came across a quotation that instantly became my all-time favorite, in part because it so perfectly describes, however indirectly, the desk-to-market process of bringing art — and that would most definitely include your book, my friend — to the masses, even in this age of do-it-yourself.

Cohen was initially signed to Columbia/CBS  Records (“CBS”) in the mid-1960s and remained with it right up to his death in 2016. He spent a great deal of his early career acquiring a cult following (and almost universal critical acclaim) based upon a series of album releases that to this day sound either compelling, unique, unusual, or unlistenable, depending on whose ears are being used. CBS, to its credit, never dropped Cohen, even when the sales of his new releases — which were not huge until much later in his career —declined for several years in the run-up to the point when he became a household name. CBS nonetheless at one point declined (initially) to release one of his albums. Cohen in 1984 presented to CBS a collection of songs which was ultimately released by a small label — and somewhat later by CBS — under the title Various Positions. Walter Yetnikoff was President and CEO of CBS Records at the time. Yetiknoff, as a preamble to telling Cohen that his label would not be releasing Various Positions, famously said:

“Leonard, we know you’re great, we just don’t know if you’re any good.”

Various Positions contains a little four and one-half minute tune titled “Hallelujah,” that — like Cohen’s “Suzanne” a few decades before — eventually became to megachurch youth services (with a couple of the verses edited) and to funerals what “Proud Mary” by Creedence Clearwater Revival was and is to weddings. The song became so popular as a licensed property that Cohen at one point somewhat meekly asked that a moratorium be observed on placing the song in commercials, movies, and television. Various Positions also includes a deceptively jaunty little number named “Dance Me to the Edge of Love,” which is considered to be a modern standard.

Let’s consider that again…“Leonard, we know you’re great, we just don’t know if you’re any good.”

So what does that mean, exactly?

Trust me on this. Every stranger who looks at your work with an eye toward becoming part of the publishing process on your behalf — be it agent, editor, and publisher —  may personally be in awe of your work. They might well think that you’re great. The issue is whether you’re “any good.” That term is another way of asking/guessing whether your creation will sell enough to make whatever might and majesty the prospective agent, editor, or publisher can throw behind it be worth their while, “while” being their time, effort, and money.

Such a conclusion is often — actually, almost always — a guess. The odd thing is that most of the time whoever makes the decision is wrong in all of the ways it can possibly be. Great books are turned down. Books that are worthy, or “great,”  are published and then ignored by the reading public. They are great books, possibly, but by the objective standard of sales numbers they are not “any good.” The “right” choices pay for the “wrong” ones which is how the whole industry, whatever it may be, keeps rolling along until it doesn’t.

This state of affairs doesn’t exist only in the arts. There are all sorts of products that seem like great ideas but never make it out of the design room for one reason or another. The ones that do aren’t always successful, either. I used to think that if I liked a particular product — Rice Chex cereal bars? —my preference almost certainly spelled its doom. I don’t think that anymore. I am totally convinced of it.

So how do you get around it? You ignore it. You cannot really control it.  Focus on being great. Write your own story, instead of a variation of your favorite author’s, or what is “hot” right now. Shine it up nicely.  Get yourself an editing program to go through your work. This past Wednesday our very own Terry Odell discussed an editing program named Smart Edit that seems to fill the bill. Don’t rely entirely on that, however. Go through it yourself and then have two other literate, nitpicking people review your review for you to find what you missed. When you think that everything is as perfect as you can make it send it to a prospective agent or editor Then sit back and say the short form of the Serenity Prayer, which is “(Expletive deleted) it. Just (expletive deleted).” Keep sending it out. You will know soon whether someone thinks that you are any good. Just don’t stop. Remember Mr. Yetnikoff, who wasn’t sure if Mr. Cohen was any good after listening to an album with two songs on it that are still popular almost three decades later. While you’re waiting, remember what Audrey Hepburn said: “Nothing is impossible, the word itself says ‘I’m possible’!” Just so. Illegitimi non carborundum.

One postscript to this: I had the good fortune to see and hear Cohen perform in the early 1970s at a small club named The Smiling Dog Saloon in west Cleveland. I went to the men’s room between what turned out to be the two best sets of live music I’ve ever attended and was taking care of things when the urinals on either side of me simultaneously became occupied. I glanced  — yes, at eye level! — to my left and there stood Dave Mason (of Traffic), dressed entirely in bright red, grinning beerily back at me. I nodded, somewhat embarrassed for whatever reason, then glanced away to my right. There stood Leonard effing Cohen. A few seconds later we went to the sinks and, after washing up, somewhat uneasily introduced ourselves — not that the company I was in needed any introduction — and shook hands all around.

I stumbled back to my table, bumping into chairs and people all the way there. The lady I was with looked at me when I finally sat down, smiled, and said, “Wow. What happened to you? You look like you got hit on the head. Did you, like, run into Leonard Cohen or something?” She laughed, took a sip of her beer, and said, “Oh. I heard someone say that Dave Mason is here…we should try to find him.” Done. And done.

Thanks for being here once again. If you’d like to share your best acceptance or worst rejection, please do. It doesn’t have to be book- or even art-related. Let the games begin!