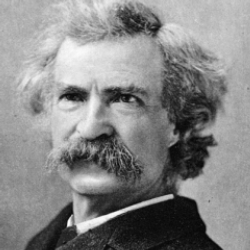 On occasion here at TKZ we’ve posted on the topic of public speaking for writers. Examples are here (Gilstrap) and here (Burke). Today I’ll add a few of my own tips for the scribe who gets a yakking gig. The first comes by way of Mr. Mark Twain.

Before his books and stories began to appear, Twain gained celebrity as a lecturer. Working as a correspondent for the Sacramento Union newspaper, he’d sent in dispatches on what were then called The Sandwich Islands (Hawaii). These proved wildly popular. When he returned stateside in 1866, he pondered how he might use this bit of renown to expand his wallet.

One possibility was delivering a lecture based on his columns. Encouraged by a friend, Twain rented a San Francisco opera house and charged $1 a ticket. He wrote up an advertisement for the newspapers:

AT THE ACADEMY OF MUSIC
ON TUESDAY EVENING, OCT. 2d

In which passing mention will be made of Harris, Bishop Staley, the
American missionaries, etc., and the customs and characteristics
of the natives duly discussed and described. The great volcano of
Kilauea will also receive proper attention.

A SPLENDID ORCHESTRA
is in town, but has not been engaged

MAGNIFICENT FIREWORKS
were in contemplation for this occasion, but the idea has been abandoned

A GRAND TORCHLIGHT PROCESSION
may be expected; in fact, the public are privileged to expect whatever they please

Twain was nervous that evening, sure he’d be facing a mostly empty house. In fact, the place was packed. But when he first stepped out into the lights he was sandbagged by stage fright. He was, as one biographer put it, “wobbly-kneed and dry of tongue.” As the introductory applause died down, he told himself, “These are my friends.” His nerves began to calm. He spoke to the audience as if he were seated with pals around a cracker barrel in some old mining town.

The lecture was a hit.

Afterward, and older man found his way to Twain and asked, “Be them your natural tones of eloquence?”

Which is my first bit of advice for a speaker: Be yourself. Use your natural tones of eloquence. Don’t sound like a speechifier. Speak as you would to a group of friends.

Second bit of advice: Your address should have one main point. I wrote some time ago about my ride with Justice Thurgood Marshall, who told me the best oral arguments in the Supreme Court were designed around winning one, primary point.

Knowing the single point you want to make will take care of 50% of your nervousness. Write down that point in a sentence. For example: Anyone can improve as a public speaker if they will follow a few fundamentals.

Then design your speech to “prove” that point and inspire your audience to take action.

How do you prove a point? With evidence. In a speech, anecdotal evidence is best, because it’s a story, and stories make lectures come alive. In a speech about the above point, I might bring Mark Twain in again as “evidence” for the fundamental “Always leave them wanting more.”

“Some years ago in Hartford we all went to the church on a hot, sweltering night, to hear the annual report of Mr. Hawley, a city missionary, who went around finding the people who needed help and didn’t want to ask for it. He told of the life in the cellars where poverty resided, he gave instances of the heroism and devotion of the poor … Well, Hawley worked me up to a great state. I couldn’t wait for him to get through. I had four hundred dollars in my pocket. I wanted to give that and borrow more to give. You could see greenbacks in every eye. But he didn’t pass the plate, and it grew hotter and we grew sleepier. My enthusiasm went down, down, down – $100 at a time, till finally when the plate came round I stole ten cents out of it.”

Third tip: If you can get a laugh, it always helps. The easiest way to get a laugh is with a good anecdote, like the above. That way it doesn’t seem like you are trying to tell a joke, which can sometimes fail. Pepper your speech with a few choice quotes, too.

Fourth tip: Take off your name badge when you speak. It’s distracting.

Fifth tip: Don’t mangle the opening. The audience sizes you up within the first seven seconds. So don’t waste time with impromptu thanks (“Thanks, Fiona, for that lovely introduction”) or currying favor (“It’s so nice to be here tonight”) or, egad, confession (“I’m a little nervous, so I hope you’ll forgive me.”)

Instead, when you get to the podium, pause for three seconds. Then launch with one of the following:

“It was Mark Twain who said, ‘It usually takes me more than three weeks to prepare a good impromptu speech.’ ”

“Eighty-three percent of Americans fear public speaking more than they do death. According to Jerry Seinfeld, that means if they go to a funeral they’re better off in the casket than giving the eulogy.”

“You’ll want to go, I suppose,” the barber said.

“Just my luck,” Twain said. “I always have to stand when that fellow lectures.”

Where do you find such material? Research, of course, which is rather easy these days via the internet. But I’ll mention one favorite resource I’ve used for years—The Little, Brown Book of Anecdotes.

And now, lest you be tempted to remove a dime from the collection plate, I’ll stop.

You’ve all heard some great speeches. What have you noticed about them, and the speaker?

39 thoughts on “Public Speaking for Writers”