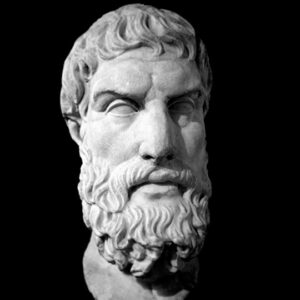 Sometimes I wake up in the middle of the night and my mind is abuzz. It could be that the Boys in the Basement are hard at work, and making a lot of noise. It might be that extra bit of spicy tuna I chomped at dinner. Or perhaps something has intruded on my bio-rhythms, some idiotic remark I heard on a newscast, which is always a possibility when Congress is in session.

Regardless, I know myself well enough to know I’ll be up for about an hour.

So I’ll pad out to the family room and turn on the TV. At that hour there are lots of classic shows on. Which are the best shows (says this Boomer), e.g., Alfred Hitchcock Presents, The Twilight Zone, Perry Mason. Part of the fun is seeing young actors making their early appearances. Like Robert Redford as Mr. Death in a Twilight Zone. Or Ryan O’Neal as a murder suspect in Perry Mason.

Anyway, the other night I started watching a fave from my adolescence, Mannix. That PI show starring Mike Connors ran from 1967 to 1975. It had one of the great musical themes (via Lalo Schifrin). Connors was always solid, and the plots twisty and turny and fun.

This particular night the episode was “Color Her Missing.” A PI friend of Mannix is murdered, and a big-time lawyer is a suspect. He has an alibi, but it’s hard to prove. So he asks Mannix to confirm it. And on we go.

As a former actor and student of the art, I always appreciate a good performance. And the guy who played the lawyer caught my eye. He was very good, very natural, and ruggedly handsome. He looked like a guy who should have had his own PI show, or been either a star or dependable character actor in the movies.

So I looked him up on IMDB. His name was Jason Evers. I’d never heard of him. But I’ve probably seen him a number of times, as he worked consistently in TV. He never made it in the movies, however, coming closest in the camp classic The Brain That Wouldn’t Die (1962). [Side note. The decapitated head in that film was an actress named Virginia Leith. She was a knockout beauty and terrific actress, by way of her role in the neo-noir A Kiss Before Dying (1956). After I watched the film I wanted to know what became of her, as she was definitely star material. But she’s best known as that doggone head!] 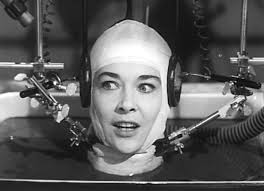 Virginia Leith in The Brain That Wouldn’t Die

Why do I mention this? Because not everyone who deserves to be a star becomes a star. Not every writer who is good enough to be on the A List makes it to the A List. There’s an element built into nature that leaves some things to pure chance.

The trick in life is not to stress about those things.

That is the essence of the Stoic philosophy. Epictetus put it best: “There is only one way to happiness and that is to cease worrying about things which are beyond the power of our will.”

You got that right, Epic. Most writers worry about every single aspect of every single book release. Will it sell? Will it be seen in bookstores? Will the critics/reviewers hate it? Will it land on a major bestseller list? Will I get that literary award I’m lusting after? Does Oprah have my phone number?

None of these things can you control.

Thus, the writer determines to do everything within his power: bookmarks, swag, panels, bookstore signings, blog tour, Facebook ads, Amazon ads, Bookbub ads, tweets, ’grams, howling at the moon—all the while stressing over the results.

But when the dust settles down, down to the lower depths of the Amazon rankings, what then? If the author has too much emotional investment in great expectations, he will suffer needless inner turmoil. It can hamper or even end a writing career. Many a writer has called it quits after a third or fourth book got remaindered within a month and the publisher did not offer another contract.

To repeat: Not everyone who should be a star becomes a star.

But anyone who keeps writing is a writer. And that very act—the writing, falling deeply into a scene, getting into “the zone”—turns out to be the only real antidote for writerly anxiety.

So put this on a sign or sticky note on your desk: 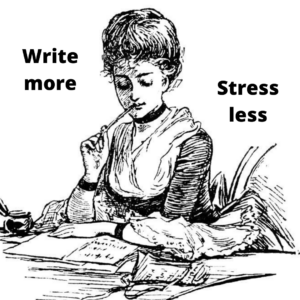 What’s your stress assessment? Do you worry too much about things outside your control?

If you need help with the mental game of writing, let me suggest this book.