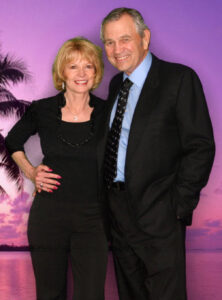 Today I’m delighted to chat with bestselling authors Kat Martin and L.J. (Larry) Martin, who’ve been together for 34 years. Between them, they have written well over a hundred novels.

Kat has written more than 75 historical and romantic suspense novels that have sold many millions of copies all over the globe. Larry crosses multiple genres, with bestselling westerns, thrillers, and nonfiction. He is also a founder and former owner of Wolfpack Publishing.

Here’s the inside scoop from Kat and Larry on their successful, long-lasting relationship.

DB: For most households, one author is quirky enough. How do two authors married to each other make it work? 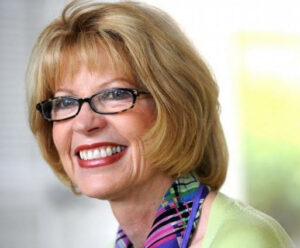 Kat: Actually, it has some advantages. We have the same friends, travel to the same conferences, are interested in a lot of the same subjects. We also understand the frustrations of being a writer, which are difficult for a non-writer to understand.

Larry: Ditto to Kat’s answers, plus we can read each other’s work and comment. For instance one time she was reading some female dialog I’d written and then drew a little mustache in the margin…I got it, my lady sounded like a dude.

DB: You met each other while working in the real estate industry. How did you each make the huge career change from real estate to writing?

Kat: Larry had already written a historical novel when we met.  He continued to work while I wrote my first book and we ended up selling both novels within six weeks of each other. 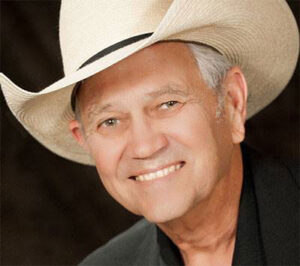 Larry: I had a giant year in the R.E. biz and never wanted to work that hard again. We had a little financial cushion, and needed it, and Kat was enthralled with my writing and said, “Hell, I can do that.” And did, far better. We’d always been avid readers, which is the basis of great writers.

DB: You are both exceptionally prolific authors. Do you have systems or routines for keeping up high production?

Kat: I don’t have kids, which gives me a lot of free time. Larry’s boys are grown. So that gives us a real time advantage. Also, we like what we are doing so mostly we would rather be writing than anything else. Well, I do enjoy traveling, staying in nice hotels and eating in gourmet restaurants. But we manage to work that in.

Larry: It’s productive to have “in-house” competition and an example to follow. Kat’s a voracious worker. I’m distracted by yard work, garden, photography, hunting…but her dedication always pulls me back. And both of us love to write.

DB: Do you brainstorm with each other on story ideas? Can you describe the process?

Kat: Larry writes his own books, his own way. No input from me. I appreciate his help with plotting and he also reads my action scenes and gives me input. Other than that, we pretty much work separately.

Larry: Neither of us slows down enough to get much input from the other. I help her occasionally with the male aspect: fistfights, firearms, survival, but that’s about it. I’m also preoccupied with publishing nonfiction, and enjoy that part of the biz.

DB: You often combine travel with research. This may be a chicken and egg question but do you visit locations with a plot already in mind, or do story ideas spring out of new places? 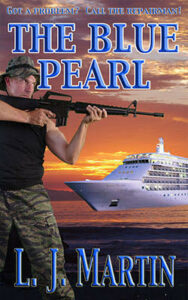 Kat: A little of both, I think. Sometimes we go places because one of us is working on a story.  Sometimes when we are traveling a new idea comes from the experience we are having at the time. Larry just finished a novel called The Blue Pearl, a high action thriller set around a cruise ship being taken over by terrorists. Our cruise was already planned. The story came to him before we left and the cruise helped with his research.

Larry: Most action books are a quest of some kind so the cruise was ideal with the addition of some really bad guys in exotic locations. I was able to interview the captain and security people and go everywhere on board other than the engine room. My prior thriller, The K Factor, was set primarily in North Korea and trust me, I didn’t go, and the cruise and great sights and wonderful restaurants in France, Spain and Portugal was more fun than researching lots of North Korean trials and tribulations…as much as I enjoy research.

Kat: My day starts around 7 a.m. I enjoy my morning till around nine o’clock, when we either head to the gym for an hour, or I start going through email and doing some promotion. I like to be writing by 11:00, no later than noon, then write till the end of the day. After that I do some Facebook and a little more promo, then pour myself a glass of wine and relax for the evening.

Larry: I hit the machine early, usually by six at least. When I smell the blood sometimes by four as I can’t sleep as my mind is plotting. Cup of coffee, sweatsuit, and I write until it’s time to shower and three days a week hit the gym to keep the brain blood flowing, then back to the word processor. Often in the P.M. I’m in the garage or outdoors, but I’ve already got my eight or ten in.

DB: How do you balance your individual creative idiosyncrasies in a long-term relationship?

Kat: Mostly he does his thing; I do mine. We overlap at the end of the day. He has a lot more diversified interests than I do. I’m fairly well consumed by my writing. Though currently, I’m on a remodel project for our new winter home, which has been agonizing and exhilarating.

Larry: It’s more than merely nice to have a beautiful, intelligent, woman with like interests seldom more than one story away. Most of the idiosyncrasies are left in characters in our books. We both love to cook, love a good glass of wine, love good dramas on TV or the theater, and each other’s company. What could be better?

Kat: I’ve got more Maximum Security novels coming out, including a new novella called Come Daybreak, which is one of my personal favorites. I’m hoping readers will be on the lookout for the books and that they enjoy them.

Larry: And I’m supporting Wolfpack Publishing, a company I co-founded and sold to my former partner, who still publishes my Westerns, and now that my non-compete has expired I’m into another aspect of publishing. No one does a better job with Westerns, and other fiction, than Mike Bray. Buttonwillow Books, my new effort, publishes my nonfiction and some for others. I’m currently enjoying publishing educational books by T. Michael Traser, an internationally recognized educator and a friend. If you’re a teacher, particularly one with English challenged students, check out the series ESL – Fun Games for the Classroom. Immigrant children who don’t master English are destined to be trapped in barrios and enclaves, and that’s not a good thing. And while you’re at it grab a copy of Rugged Trails, my latest western, suitable for young adults. Thanks for taking the time to chat with us.

Thank you, Kat and Larry, for opening up about your writing lives to TKZ readers.

14 thoughts on “Kat Martin and Larry Martin – Marriage Between Authors”