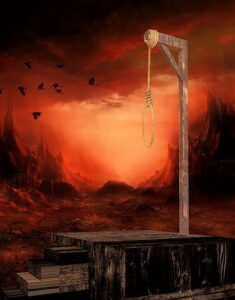 If a prisoner survives multiple trips to the gallows, should he be set free?

In the early hours of November 15, 1884 Miss Emma’s lifeless remains were discovered with three knife wounds to her head. The murderer also tried to set the body on fire.

John Lee had worked alongside his sister at the The Glen since leaving school. In 1879, he joined the Navy. A medical discharge sent him home to Torquay to work as a footman. But he stole from his employer and was convicted. Upon his release from prison in 1884, he returned to work at The Glen.

As the only male in the household at the time of the murder, police zeroed in on Lee as the prime suspect. Along with other circumstantial evidence, an inexplicable cut on his arm sealed his fate. But did the police have the right man?

Attorney Reginald Gwynne Templar was a frequent visitor to The Glen. After Lee’s arrest, he offered to represent him for free. Which was highly unusual, considering Templar and Miss Emma were good friends. Lee told police Templar was also in the house that night. Odder still, folks wondered how he found out about the murder so soon after it happened.

Could Templar be the killer?

There was little evidence to prove Templar was guilty. Just as little to prove Lee was, either. Nonetheless, police believed they had their man.

“The reason I am so calm is that I trust in the Lord,” Lee told the judge at trial, “and He knows I am innocent.”

John Henry George Lee was found guilty and sentenced to hang at Exeter Prison on February 23, 1885. That day, James Berry, the hangman, went through the usual testing of the trap door, the scaffold, and the rope. But when they slipped the noose over Lee’s head and pulled the lever, the trapdoor wouldn’t open.

They tried to hang him again. And the gallows misfunctioned a second time.

“It would shock the feeling of anyone if a man had twice to pay the pangs of imminent death,” said Sir William Harcourt, British Home Secretary.

The public interpreted the gallows malfunction as divine intervention. Lee served 22 years for the murder of Miss Emma, describing his time as “moving from one tomb to another.” He was released from prison in 1907.

Numerous stories exist about how Lee spent his life from that point on. Some say he moved abroad; some say he moved to London. Two Lee enthusiasts conducted research in 2009 and placed his grave in Milwaukee, Wisconsin. That same research claimed Lee deserted his wife and children in Britain after his release from prison for a second family in the U.S.

Templar went insane and died at an early age. Witnesses say he “babbled about murder on his death bed.”

John Henry George Lee rose to infamy as “The man they couldn’t hang.” His name went on record as “the only person in the world to survive three hangings.” But was he? 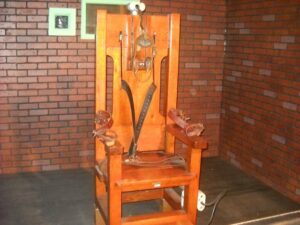 A little digging led me to an English criminal named Joseph Samuels. In 1801, a jury convicted Samuels of robbery at the tender age of 15 years old and shipped him to Australia, to serve his time at a penal colony in Sydney Cove.

Security in those early penal settlements were reinforced by isolation—prison guards trusted the Australian wildlife to hunt and kill any escapees.

Despite the risk to life and limb, Samuels and his gang of thieves succeeded in escaping. Once they were safe from the confines of prison, the unruly bunch robbed a wealthy woman’s house. They were in the process of stealing a bag filled with gold and silver coins from her desk when a policeman showed up. One of the gang members shot and killed him. Because Samuels had some of the stolen coins in his pocket when he was eventually caught, the police believed they’d snagged a cop-killer. The wealthy woman also identified Samuels as one of the robbers.

After an intense interrogation, Samuels confessed to the robbery but claimed he had no part in the murder. Almost all of Samuels’ fellow gang members were acquitted due to lack of evidence, except one—Isaac Simmonds, who admitted nothing.

Samuels, however, was sentenced to hang.

On September 26, 1803, twenty-three-year-old Samuels and another prisoner stood before a crowd of onlookers, cheering for the event to begin. Back then, Australia didn’t employ a drop-hanging method of execution. Instead, they placed the prisoner on a cart pulled by a horse. Once the noose was slipped over the prisoner’s head and secured, the executioner would slap the horse to get him to take off. This resulted in the prisoner slowly strangling while being dragged to his death. Five thick cords of hemp made up the rope that reportedly could hold 1,000 pounds without breaking.

Could divine intervention save young Samuels, too?

The executioner slid the nooses around the necks of the two prisoners. Officials gave the men a moment to pray with a priest, and then offered them a chance to make a public statement. Samuels confessed to the robbery, but, he said, he was no killer. In fact, the real murderer was in the crowd right now. Isaac Simmonds, he pointed out, was the one who shot the policeman that night.

Since Samuels had just prayed with the priest and wouldn’t want to die with such an egregious sin on his conscious, the public believed him. Men in the crowd dove on Simmonds and held him for the authorities.

The crowd went wild. God had spared his life a second time!

A third noose was secured around Samuels’ neck. Incredibly, the rope broke again. By then, the crowd had whipped into a frenzy, shouting, demanding the release of Joseph Samuels. It was then that the State Marshall ordered a stay of execution until he could track down the governor.

Later that day, the governor inspected all three ropes for tampering but found no signs of anything wrongdoing. Like the townsfolk, he also presumed three broken nooses must be proof of Samuels’ innocence. Things like this just didn’t happen… unless God had intervened.

Isaac Simmonds was arrested, convicted, and hanged for the murder of the police officer. His noose worked just fine. 🙂

I found another story of a teenager who got strapped to the electric chair twice, and survived. I’ll let the prisoner, Willie Francis, describe his ordeal…

I wanted to say good-bye, too, (Captain Foster had cheerfully said, “goodbye Willie”, before throwing the switch) but I was so scared I couldn’t talk. My hands were closed tightly. Then—I could almost hear it coming.

The best way I can describe it is: Whamm! Zst! It felt like a hundred and a thousand needles and pins were pricking in me all over and my left leg felt like somebody was cutting it with a razor blade.

I could feel my arms jumping at my sides and I guess my whole body must have jumped straight out. I couldn’t stop the jumping. If that was tickling it was sure a funny kind (He had been told it would tickle and then he’d die). I thought for a minute I was going to knock the chair over. Then I was all right. I thought I was dead.

Then they did it again! The same feeling all over. I heard a voice say, “‘Give me some more juice down there!’” And in a little while somebody yelled, ‘”I’m giving you all I got now!”

I think I must have hollered for them to stop. They say I said, “Take it off! Take it off!’” I know that was certainly what I wanted them to do—turn it off.