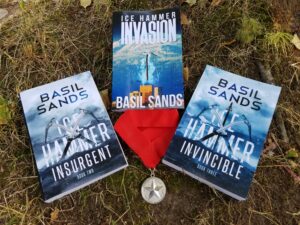 Jim Bell recently wrote an excellent post about doing his own narration for his audiobook. With training as an actor, attorney, and experienced public speaker, he’s a natural for his craft books.

For memoirs, the author is often the default choice as long as s/he has a good voice. (See recording artist Juni Fisher’s tips for DIY narration at the bottom of this post)

What narration styles do readers prefer for fiction?

In the 1990s, my husband and I browsed racks at truck stops for Books of the Road cassette tapes with great selections of mysteries, thrillers, and historicals. Listening to books made the hours and miles fly by. Several times I really hated to leave a compelling story, even for a dinner break!

Back then, most narrators were male. I recall being annoyed every time a man adopted a falsetto tone for a female character. It totally jerked me out of the story and had a ridiculously comic effect, not the best mood for a tense, life-or-death scene.

Conversely, the female narrator of an early Sue Grafton book sounded so silly when she attempted a phony deep voice for a male character, we ejected the tape.

Audiobooks have grown up a lot since the days of cassette tapes. With their increasing popularity, I went in search of the tastes of today’s listeners.

GoodReads featured a discussion on audiobooks prompted by a two-part question:

In general, would you say you read more books written by male or female authors?

Would you say you listen to, or prefer listening to, more male or female narrators?

Responses were evenly split on whether they read more female or male authors and not necessarily along gender lines.

Many reported they didn’t care which gender as long as the narrator knew what s/he was doing. Quality of performance made the strongest impression.

Several said a book written in first person point of view should be read by a narrator of the same gender.

Narrators develop their own fan bases. One fan said: “I can fall in love with narrators and try an audiobook simply because they narrated it, even if I’ve never even heard of the author.”

Quite a few cited Davina Porter as a favorite. She narrated Diana Gabaldon’s Outlander series.

Others said they would listen to Kobna Holdbrook-Smith read the phone book.

To learn what happens inside the recording studio, I reached out to two well-respected audiobook narrators, one male, Basil Sands, and one female, Marguerite Gavin. 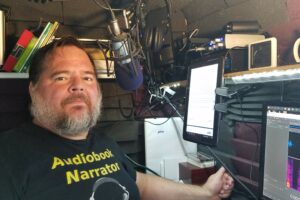 Basil Sands has narrated numerous novels by TKZ’s own James Scott Bell and John Gilstrap. Basil is also the author of the Ice Hammer series. He has his own studio in his Anchorage, Alaska home where he narrates and does post-production editing.

DB: Basil, would you give us an overview of the process of creating an audiobook?

BS: Writing a novel has a great many complex parts and narrating a book into audio format is similar.

The rights holder (author/publisher) contacts the narrator community for auditions. Once the narrator is chosen, contract and script are sent. The narrator should read through the entire text at least once. There will likely NEVER be time to read a book twice, or enjoy a leisurely read ever again. Time crunches may mean cold reads so improv skills are a must.There is literally no time for rehearsing.

In order to make a decent living, a narrator has to do two to four books a month or more.

DB: Do you ever consult with the author?

BS: In most cases, [publishers arrange contracts and] authors are off-limits to narrators. If I can, I love talking to authors to get their take on their characters.

Years ago, I recorded back-catalog books for Piers Anthony (sci-fi/fantasy author with unusual names and spelling). I emailed Piers (now 85). He had no idea his old books were being recorded and was delighted. He gave me free rein to perform as I pleased. I had a lot of fun with his series.

DB: How do you handle female voices and dialogue?

BS: With a fairly deep, resonant voice, I never go falsetto. My tactic is to soften my voice, slide up an octave or two, and give a less masculine impression.

Basil’s summation: Narrating is far from the easiest of acting professions but is one of the best ways an actor can really sink their chops into their trade. Every book is a marathon, playing all the parts, knowing all the details, in full control of the entire show. Did I mention I love my job? 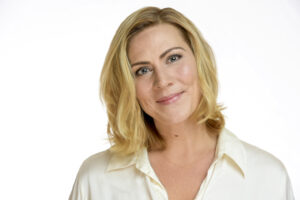 Marguerite Gavin has narrated 600+ books and won multiple awards. She lives on the Delaware shoreline with her 19-year-old daughter. She likes to say she and author Dana Stabenow grew up together since Marguerite narrated Dana’s first Kate Chugak thriller and they’ve worked together for 22 books. Marguerite also brings to life Liam Campbell, Dana’s male protagonist.

During our phone conversation, when asked how she handles male voices, Marguerite says she narrates many thrillers where, inevitably, “five male cops all from the same hometown with similar accents wind up in a car chase. How do you distinguish among them?” She then demonstrated several voices with slight but distinct differences in tone, diction, and speech patterns.

In addition to narration, Marguerite is an actor/director and jokes, “Audiobook narration supports my theatre habit.”  She also teaches and coaches students “to understand the actor’s instrument of voice and to understand their own range.”

If the character is a hulking male truck driver who smokes, “I throw air over my cords. It’s not always about pitch.”

She believes it’s easier for a woman to do male voices because women have more range. “I’m not afraid to sound like a man.” She suspects men have more trouble making the leap to sound feminine.

Her enthusiasm for her profession comes through with every word. “I’m fortunate to have the balance of financial stability with my passion. It’s important to keep your joy in your job.”

“The skill is to be inside the story as much as possible. You don’t want people listening to an actor act rather than getting lost in the story.” She always asks, “What makes a good reading experience? What is the feeling?”

Thank you, Basil and Marguerite, for giving us a peek inside audiobook narration! It’s always enlightening to talk with artists whose passion for their profession shines through.

Do you have a preference for audiobook narrators of one gender over the other? If so, what are your reasons?

What audiobook quality is most important to you as a listener? 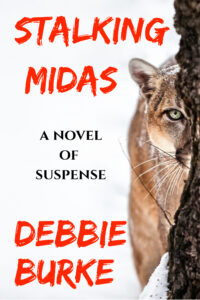