For today’s post I have something a bit different to my usual musings – this post concerns a real life story that impacted my family last week. Even though it truly is a remarkable story in and of itself (one providing a perfect antidote to today’s winter-comes-way-too-early weather in Colorado!), it also offers a heartwarming affirmation that sometimes luck and persistence pays off (a belief all of us writers should embrace, especially in our darkest moments…)

Last Monday, my mother-in-law was out walking her beloved border collie,Tess, in the Australian bush outside the Victorian era mining town she lives in, when the dog literally disappeared. One minute Tess was scampering through the undergrowth, the next minute she was gone. My mother-in-law called for her frantically for nearly an hour, but there was no answer – and no sign of Tess. By the time we received the news in Colorado, Tess had been missing the whole day – and by then the anxious waiting was already taking its toll. Had Tess run off after kangaroo or been bitten by a snake? In an area known for abandoned mine shafts (during Victorian times, this was a huge gold mining area), had she fallen down one and been injured? Another day passed and hope was fading – it’s almost summer in Australia and there hadn’t been any rain for almost a month. How could she survive when there was no water to be found? Three more days passed and we all feared the worst…

Then at midnight we  received the most remarkable call – Tess had been found alive and well after having fallen some 5-10 meters down an abandoned mine shaft. It was a movie-like moment and (as you will see from the photos) a truly remarkable ending that has captured the local imagination (and news!) in Australia. Even now, after a weekend to digest the news, I don’t think any of us can truly believe what just happened. For my mother-in-law it was the kindness of a friend who went back to an area that had been searched 2-3 times and who just happened to be at the right place and the right time to her Tess whimpering from the depths of this mine shaft:

Then they waited for the specialist mine-shaft rescue team (yes, they have one!) to drive over from nearby Bendigo and watched as they winched down a man who grabbed Tess and held her as they winched them both back up: 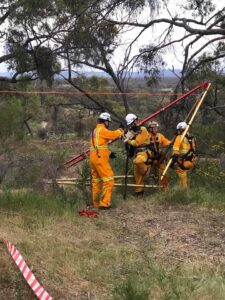 And here is the lucky dog, herself, looking none the worse for her experience. As far as the vet can tell she suffered nothing more than a scratch on the nose (and some dehydration of course). 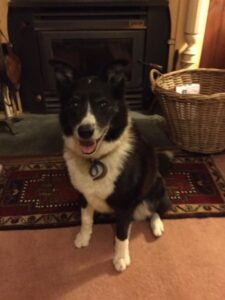 This is such a lovely story of how luck and persistence came together to save a dog’s life, that I simply had to share it.

I think we can all take heart, that sometimes, miracles do happen!

For those interested in seeing the news story on Tess’ rescue – I’ve posted the link below:

18 thoughts on “An Amazing Story of Luck and Persistence”