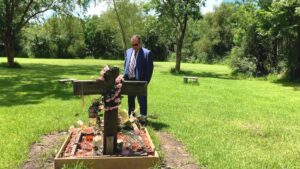 In the mid-1980s to 1993, a remote area between Houston and Galveston became a dumping ground for the bodies of four murdered women. The desolate fields off Calder Road near League City, TX became known as “The Killing Fields.”

Police detectives and the FBI believe one person is responsible, likely someone who lived in the area and was familiar with the location. But they have no suspects and no discernible link between the four victims.

Dental records identified two women soon after they were found but two more remained “Jane Doe” and “Janet Doe” for decades until they were at last IDed a few months ago.

Here is a link to the FBI report, which includes a five-minute video. Particularly poignant is the interview with Tim Miller, the grieving father of 16-year-old Laura Miller.

Starting at the two-minute marker, he describes how he would go to the fields off Calder Road to visit her memorial. He would place his hand on her cross and say, “Laura, please don’t hate your daddy but I can’t come out here anymore. I have to say goodbye and I have to put my life back together. And I’d literally be walking away and I’d hear this little voice say, ‘Dad, don’t quit, please, don’t quit.’”

Instead, Tim Miller focused on finding answers for families of missing persons. He runs Texas EquuSearch, a nonprofit organization that has located 250 missing people.

We can only hope someday he finds justice for his own child.

TKZers: Are there unsolved cases that haunt you?