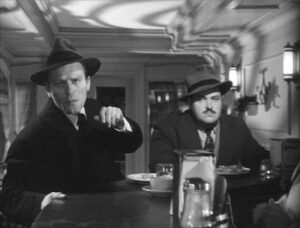 The other day I reread Hemingway’s famous short story “The Killers.” It takes place in a small-town diner at twilight. Two men enter the diner and start talking tough. It is unlike any other Hemingway story in that it is clearly pulp style. “The Killers” was published in 1927, but because it was Hemingway it came out in Scribner’s Magazine, not Black Mask.

The tough guys order the diner owner and the one patron, Nick Adams (Hemingway’s alter ego in many of his stories), behind the counter. One tough takes Nick into the kitchen and ties him up with the cook.

When the owner asks what’s going on, one of the tough guys explains that he and his partner are there to kill “a Swede.” The Swede’s name is Ole Andreson. He’s supposed to come in for dinner at six. But he doesn’t show. After an hour the killers leave, presumably to go hunt for their prey.

The owner unties Nick and the cook. Nick runs over to the rooming house where Andreson lives. Nick finds him lying on his bed with his clothes on. Nick tries to warn him, but Andreson refuses to go. He says he’s tired of running. Nick returns to the diner, and we are left with the impression that Andreson will soon be dead.

The classic film noir adaptation of “The Killers” was released in 1946 (and features the film debut of Burt Lancaster, who plays Ole Andreson). It uses the short story as the opening sequence. The rest of the film is told through a police investigation and flashbacks.

I first read this story in college, when I was going through my big Hemingway phase. This time, with twenty-five years of my own writing behind me, some things bothered me about the story.

First, the killers walk in and immediately start talking like killers. They might as well have had name badges that said, “Hi! My Name is Al, Assassin, Chicago.”

Second, they come right out and say they are there to kill Ole Andreson.

Third, they make no attempt to hide their faces.

Fourth, when they leave, they don’t shoot the witnesses they’ve just spilled their guts to.

Fifth, if they wanted to kill Ole Andreson, why do it in a public place? Why not just look him up in a directory or politely ask the diner guy where they might find him? Or stake out the diner from across the street and wait for him to show?

Sixth, they overuse the term “bright boy” when they talk. Something like thirty times in just a few pages. Maybe they are indeed killers … who annoy people to death.

If I’d been around in 1927 and met Hemingway in a bar, I might have asked him these questions, then ducked.

All this leads to me to my assertion today about the most important question you can ask about a scene. This is a question that you should ask both before and after you’ve written it. There are, of course, some other questions you need to consider before you write a scene, e.g., Who is the viewpoint character? What is his or her objective in the scene? What are the obstacles? What are the agendas of the other characters in the scene? Where is the conflict?

But then should come this final and ultimate question, for it overhangs everything. Plus, it’s what the readers will immediately pick up on if it’s not answered correctly. Here it is:

Would the characters, if this were “real life,” act this way? Would they make these choices? Or are you, the author, pushing them to do certain things in order to move your plot?

Would hired killers really act the way they do in “The Killers”? Or was it a way for Hemingway to show that he could out-pulp the pulp writers of the day, especially in the dialogue department?

Another way to pose this question to yourself is: are all the characters in this scene operating at maximum capacity in order to get what they want? The sci-fi author Stanley Schmidt has wisely said, “At every significant juncture in a story, consciously look at the situation from the viewpoint of every character involved – and let each of them make the best move they can from his or her own point of view.”

Do you have a “would they really?” example from a book or movie? Carry on the conversation in the comments. I’m on the road, so will try to respond as I can. 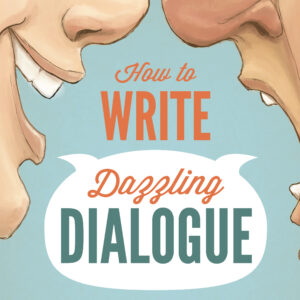 And speaking of conversations, my book HOW TO WRITE DAZZLING DIALOGUE is now available in audio, as read by the author.